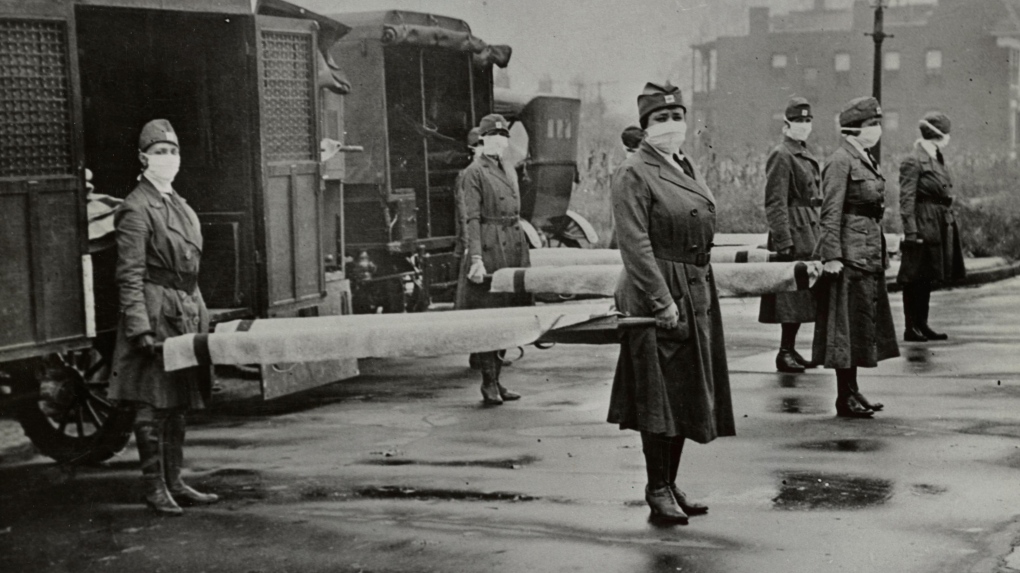 The St. Louis Red Cross Motor Corps was on duty with mask-wearing women holding stretchers at the backs of ambulances during the influenza epidemic in Missouri in October 1918. (U.S. Library of Congress)

In the deadly fall wave of the 1918 flu pandemic, millions of people were doomed because they didn't know what we know now about how viruses and respiratory illnesses spread.

We might face a similar fate if some people continue to ignore what a century of scientific progress and hindsight have taught us about ending pandemics.

Health experts expect COVID-19 infections to increase this winter because the virus that causes COVID-19 is a coronavirus, and other coronaviruses spread more during winter. In wintry, less-humid air, virus-carrying particles can linger in the air longer. Additionally, our nasal membranes are drier and more vulnerable to infection in winter. And as the weather gets colder, we spend more time indoors without sufficient ventilation, which means the virus has a higher likelihood of spreading.

COVID-19 hasn't "claimed as many lives yet as did influenza. Basically, around 675,000 people died in the US by the end of the 1918 pandemic," said Dr. Jeremy Brown, an emergency care physician and author of "Influenza: The Hundred-Year Hunt to Cure the Deadliest Disease in History." "That would, today, be around 3 million people in the US. The good news is that we haven't seen those numbers — of course, the numbers are really quite appalling.

"But, of course, the story that we're talking about isn't over yet," Brown said.

WHY THE SECOND WAVE WAS SO DEADLY

There are several possibilities why the 1918 second wave was so horrible, including a virus that possibly mutated and patterns of human movement and behaviour at the time. Winter meant that influenza also spread more and people were indoors more often.

"My guess is it wasn't great at infecting people in the spring and had to sort of adapt," said John M. Barry, author of "The Great Influenza: The Story of the Deadliest Pandemic in History." "Then a mutation took over that was very good at infecting people and also more virulent."

In 1918 flu patients, pneumonia often quickly developed and killed people by the second day. Efforts for the First World War had taken over, so rampant spread was facilitated by troop movements and crowded military camps.

Six days after the first case of influenza was reported at Camp Devens, Massachusetts, cases multiplied to 6,674 cases. When Colonel Victor C. Vaughan remembered Camp Devens, "it was shocking," wrote Gina Kolata, a science and medicine reporter at The New York Times, in her book "Flu: The Story of the Great Influenza Pandemic of 1918 and the Search for the Virus That Caused It."

"Here was Vaughan, in the midst of the first war to use modern weapons, a war that was felling young men with machine guns and gas warfare, and yet it was all nothing compared to this illness," Kolata wrote.

An immense obstacle was a lack of knowledge of the virus' character, behaviour and severity. The pandemic came before awareness of what a virus looked like and how to isolate and learn it. The vengeance of the second wave led some people and doctors to think they were dealing with a disease different than what had plagued them that spring.

Flu deaths peaked in November 1918, which was possibly the deadliest month of the pandemic. A Philadelphia parade held on Armistice Day on November 11 gave thousands of attendees the flu.

The 1918 flu ripped at the fabric of society. Roughly half of the deaths were among young adults ages 20 to 40, in contrast to the current pandemic, with older adults more likely to experience serious illness and death from COVID-19.

Many events, schools and public spaces were cancelled and closed. "'The ghost of fear walked everywhere, causing many a family circle to reunite because of the different members having nothing else to do but stay home,'" wrote Kolata, quoting an Arizona newspaper.

Authorities imposed mask-wearing and anti-spitting laws. City officials inflicted punitive measures including fines against people who broke the rules. The Provost Marshal General of the US Army in October canceled a draft call of 142,000 men, despite Europe's need for them.

The toll on adults in their prime meant that many children lost one or both parents. The world lost generations of young people, and for them the pandemic and World War I became the central experiences of their lives.

Now, let's fast-forward to the year 2020. Multiple scientific advances have allowed us a slight advantage in mitigating the spread and effects of respiratory illnesses like the flu and COVID-19. Technological improvements have allowed researchers to view cells and viruses through electron microscopes and X-ray crystallography, which also enables capturing millions of images of them. Microbiologists can now isolate, identify and describe the structure of viruses.

Although we have coronavirus tests, one shortcoming is "that we don't have sufficient testing ability and the tests take so long," Kolata said. "And when you start having something like the coronavirus where the symptoms can mimic those of the flu — high fever, chills — you can overwhelm the testing system really easily if the flu season really gets underway."

Thankfully, we're not in a global war. Hindsight and years of scientific progress have taught us how respiratory illnesses spread by encounters with respiratory droplets facilitated by close contact and insufficient hygiene. However, to be effective, these scientific and medical advantages require public compliance.

WHAT WE CAN DO

Though COVID-19 cases are increasing and could spike this winter, there are things we can do to stem the spread. Precautions such as physical distancing, avoiding gatherings and unnecessary travel, hand-washing and mask wearing are still important.

Stocking up on grocery, medical and emergency preparedness items — responsibly and in a manner that's considerate of others — can help limit trips to stores, thus decreasing chances of spread.

In 1918, there wasn't an approved and regulated vaccine. This time around with coronavirus, Operation Warp Speed and other programs are testing vaccines to be able to inoculate the public potentially by spring 2021.

What's also still of utmost value is heeding the updates and guidance of your local public health authorities, and the scientific knowledge of researchers and organizations like the US Centers for Disease Control and Prevention and the World Health Organization.