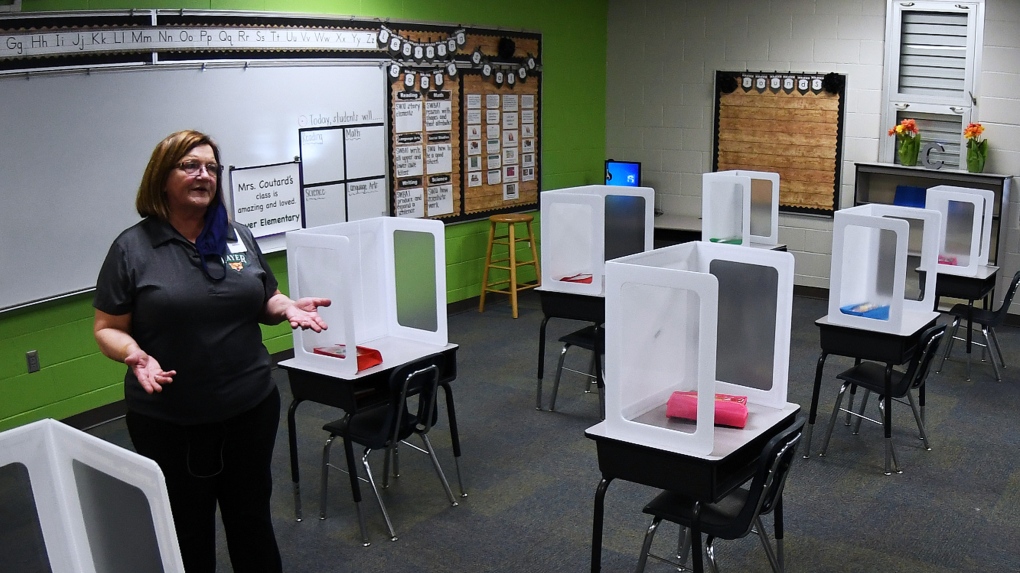 Desks are spaced 6 feet apart, temperature checks are routine and students lunch together in small groups.

This overhaul of the traditional school day has become reality in the last two weeks, as schools in Georgia, Mississippi, Tennessee and Indiana opened their doors for the first time since the coronavirus pandemic abruptly shuttered classrooms across the United States -- all while the virus remains largely uncontrolled.

Here's what we've learned from the schools that have already reopened.

More students and teachers are testing positive for COVID-19

Over the last four weeks, there has been a 90% increase in the number of COVID-19 cases among children in the United States, according to a recent analysis by the American Academy of Pediatrics and the Children's Hospital Association

While most of the nation's largest school systems are planning to start the school year completely online, some educators welcomed students back to campus full-time or at least part-time.

"We could have just delayed opening like many other schools," the student, Hannah Watters, told CNN last week. "They kind of sent us to school and used us as guinea pigs to see what would happen later on."

The high school closed for cleaning after six students and three staff members tested positive for COVID-19. As of Wednesday, at least 35 cases had been reported.

School districts in several states, including Alabama, Georgia, Indiana, Missisippi and Oklahoma directed students, teachers and staff members to quarantine following reports of at least 230 cases of COVID-19 linked to their institutions, according to a CNN tally.

Some schools were forced to suddenly change plans

Fears of coronavirus infection among tens of thousands of students and teachers in multiple states is pushing officials to switch to a full or partial schedule of online classes.

Students at the North Paulding High School will be alternating days on campus starting Monday. Students attended classes on campus for a week before going into full virtual learning this week.

Despite the change, school officials say they intend to return to full in-person instruction as soon as possible.

Two other high schools in Georgia -- Woodstock High School and Etowah High School -- temporarily moved to remote classes after 14 cases of COVID-19 were confirmed in each school and 15 people were awaiting test results, according to the Cherokee County School District.

More than 1,100 students, teachers and staff members at more than a dozen Cherokee County public schools have been placed in two-week quarantines, the school district said.

"We are not hesitating to quarantine students and staff who have had possible exposure -- even if the positive test was prompted by possible exposure rather than symptoms, as all positive cases can lead to the infection of others," Superintendent of Schools Dr. Brian V. Hightower said in a letter to parents on Tuesday.

The other schools are being asked to social distance and use masks.

"As your Superintendent, I wear a mask whenever I cannot social distance. We know all parents do not believe the scientific research that indicates masks are beneficial, but I believe it and see masks as an important measure to help us keep schools open," Hightower said.

Other schools are pushing the start of school again

Deciding when and how to open schools has been a daunting task, and some officials have opted to delay the start of the school year.

On Wednesday, Rhode Island Gov. Gina Raimondo announced she is delaying the scheduled start of the school year two more weeks until September 14 because educators need more time to prepare for in-person classes.

Raimondo said the situation in Georgia schools, including photos posted online that show students not wearing masks, were a "cautionary tale" for her.

"That's not Rhode Island. We are in a much better place in Rhode Island," she said during a coronavirus briefing on Wednesday. "I see those pictures and that to me is a cautionary tale. That's what we won't do. We're not going to open schools until they're safe."

Rhode Island's school opening delays are not an exception. At least 27 of the largest 101 school districts in the country decided to delay their first week of classes, according to a CNN analysis.

The delays in small and large districts have been prompted by the lack of preparedness, the ongoing impact of the virus and what other schools are experiencing, school officials said.

Kentucky Gov. Andy Beshear is asking schools to wait until late September to begin in-person classes. Beshear says he took the decision after seeing an increase of coronavirus cases, families traveling to hot spot states for vacation and seeing reports of Georgia and Tennessee students being asked to quarantine within days of starting school.

"What we do know is children have a harder time social distancing. And we can't put a whole bunch of them in a classroom with a teacher right now," Beshear said in a briefing earlier this week. "Other states that have tried to open this new school year are now having to close. We don't want to start and stop. That may be more difficult on our children."

The debate over in-person schooling remains at the forefront of the national coronavirus crisis, fueling tensions between state and local officials.

Last month, the state's department of education issued an executive order requiring all "brick and mortar schools" to open "at least five days per week for all students" by August 31.

"The Hillsborough County School Board needs to follow the law -- it's that simple," Richard Corcoran, Florida's education commissioner, told CNN in a statement this week. "These are urgent circumstances and we cannot, and will not, ignore it."

After talks with state officials, the school district is planning to begin virtual learning on August 24 and "transition to brick and mortar a week later for those who want to come back on August 31," the district said in a statement released Thursday.

Taryn Fenske, a spokesperson with the Florida Department of Education, told CNN on Thursday that the agency was "glad" to see the school district "worked hard" to ensure it could provide families with a choice.

"The key principle we've said time and time again was to give a real choice and flexibility to families and students to provide for the needs of all students, and we're glad they accomplished that," Fenske said in a statement to CNN.

Some school districts in central Iowa, including the Des Moines Public Schools, are also rejecting their state's guidance because it doesn't support full virtual learning.

The Des Moines Public Schools had announced its plans to offer all classes online before Gov. Kim Reynolds signed an order last month, requiring schools to teach at least half of all classes on campus.

Reynolds said this week that state officials are in talks with several suburban Des Moines school districts to "get them into compliance" after educators said they are concerned the pandemic may later drive them to full online learning.

The governor said in a briefing on Tuesday that she wants to go over the state's mitigation efforts with those districts because "every expert" has said "we have to get our kids back in school for a whole host of reasons."

'Don't let this happen to anyone else': families seek change to border rules

Berlin brothels reopen after lockdown with one main restriction