What happens if I catch coronavirus? How COVID-19 typically progresses

TORONTO -- By this point, the common symptoms of the novel coronavirus are well known: fever, cough, difficulty breathing and dual-lung pneumonia.

But the symptoms can hit at different times and with different levels of severity, meaning there is no guarantee any two COVID-19 patients will see their diseases progress similarly.

Then there are the asymptomatic carriers, who are infected and able to transmit the virus for two weeks without ever realizing it.

Add it all up, and it creates a lot of uncertainty around exactly how the coronavirus attacks its human hosts.

Although scientists around the world have been working to piece together this puzzle, they have yet to find many specific, universal truths about COVID-19 infection.

What we're left with, then, is looking for patterns in outcomes – the escalation and de-escalation of symptoms, common factors around when patients are admitted to hospitals or moved to ICUs.

One of the earliest examples guiding scientific thinking around this issue is a study out of one hospital at the pandemic's epicentre, the Chinese city of Wuhan.

All but two of the 138 hospitalized COVID-19 patients studied in Wuhan reported that they had a fever when they were first sick. Nearly 70 per cent reported fatigue at that time as well, and almost 60 per cent said they had a dry cough.

The latest Canadian data – which looks at all confirmed cases, not only ones severe enough to require hospitalization – shows symptoms presenting differently in Canada. As of April 28, cough had been reported as a symptom in 74 per cent of patients for whom detailed information was available, headache in 57 per cent, and physical weakness in 55 per cent.

Those first symptoms may not appear immediately after infection, however. The World Health Organization and Public Health Agency of Canada, among many other bodies, say symptoms can take up to 14 days to show up. This is why anyone who has travelled abroad or been in close contact with a COVID-19 patient is being told to self-isolate for two weeks.

However, it seems likely that symptoms will show up much sooner than 14 days after infection. American researchers have estimated the median incubation period at 5.1 days.

Robin Collins' battle with the virus began on March 13 with a headache, a sore throat and some chest congestion – symptoms that had him thinking he probably had a cold.

"The first two or three days just felt like any other virus that I have had," the 46-year-old told CTV's Your Morning on April 28 from his home in Guelph, Ont.

Collins started to realize something else was going on March 17, when he developed a fever, which he said is unusual for him even when he's sick. He crashed the next day, finding himself with shortness of breath and no energy.

"It was a serious illness for me to go through. It is the worst that I have felt in my life," he said.

Acquiring these severe symptoms five days after first noticing something was wrong mirrors the experience of patients in Wuhan, where researchers found that patients typically reported shortness of breath five days after their first symptoms appeared.

Based on median values, patients in Wuhan ended up in hospital two days after developing shortness of breath. Collins was there sooner – the same day – and was diagnosed with COVID-19. The doctor felt he did not need to be admitted to hospital, however, and sent him home.

Collins said his condition started to improve on March 22 – nine days after he first noticed his symptoms. Two days after that, he was feeling almost like his old self.

This timetable suggests Collins may have been luckier than most symptomatic COVID-19 carriers. Another Chinese study, this one involving patients in two hospitals, found that hospitalized patients who survived were infected for a median of 20 days in total, although one outlier fought the virus for 37 days before it was gone. 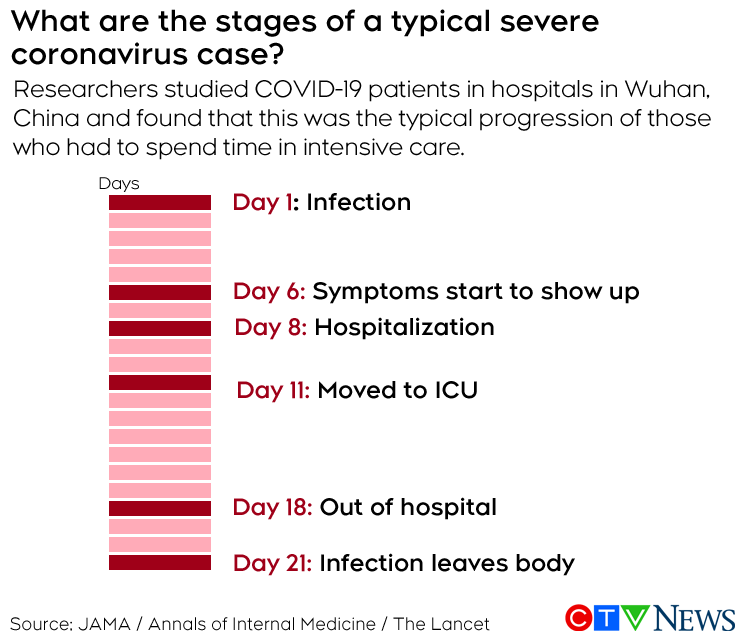 BEATING THE VIRUS ISN'T THE END OF IT

Repelling the virus doesn't mean a patient is completely out of the woods. If COVID-19 has done enough damage to the body, a long period of recovery may still await the patient.

That's what Erin Calver is going through. The Cochrane, Alta. woman first noticed her symptoms on March 18. This week – more than 40 days later – she's still coughing and left short of breath by physical exertion.

"Every week it's getting better – it's just a slow and steady recovery," she told CTV's Your Morning on April 27.

Calver's earliest symptoms included a sore throat and chest pain. Like Collins, she first thought they were signs of a cold. Three days later, when the symptoms had progressed to what she described as "severe … coughing and shortness of breath," she sought medical help.

When her test came back positive for COVID-19 on March 23, she was rushed to hospital and her parents were told she would likely end up in the ICU. She did, spending over a week hooked up to oxygen before her condition improved. She was released from hospital April 5.

Her condition worsened more quickly than what was noted by the researchers in Wuhan. Patients there ended up in hospital seven days after their first symptoms showed, and in ICUs after 10 days, based on median values, rather than the five days later it was for Calver. The typical patient in Wuhan also spend 10 days in hospital before being discharged, rather than the 12 days it took for Calver.

Calver's long-lasting symptoms and slow recovery are also typical of the Chinese experience, as the two-hospital study found that 45 per cent of patients there still had coughs when they left hospital.

What happens if I catch coronavirus? How COVID-19 typically progresses

Snowbirds to boost morale amid COVID-19 with cross-country tour