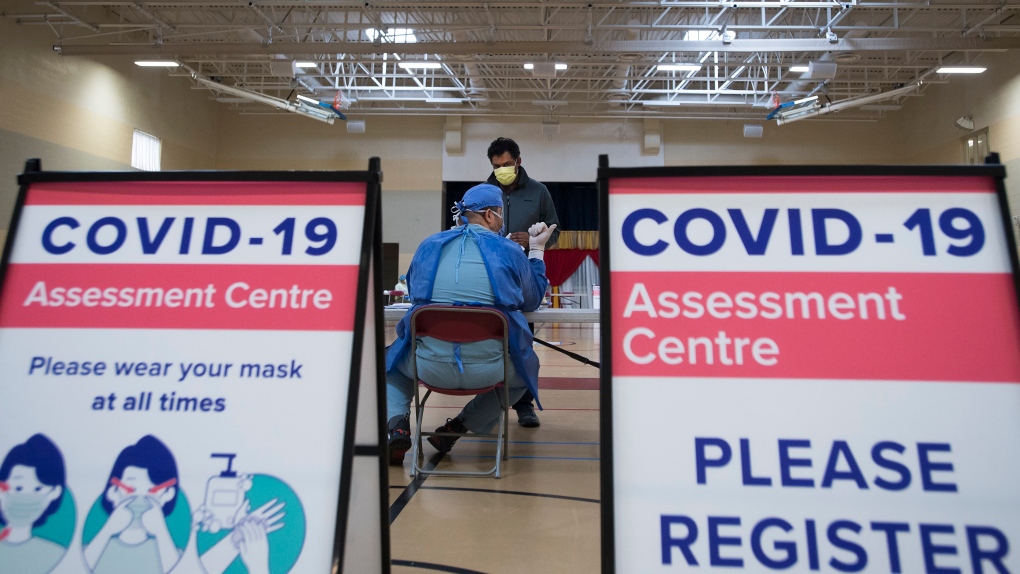 A man gets instructions for being tested for COVID-19 from a health care worker at a pop-up testing centre in Scarborough, Ont., on Friday, May 29, 2020. THE CANADIAN PRESS/Nathan Denette

TORONTO -- High poverty rates among most visible minority groups prior to COVID-19 make them more vulnerable to the financial impact of pandemic-related work disruptions, according to new survey results from Statistics Canada.

The survey released Monday found that 42 per cent of Filipino-Canadians and 47 per cent of West Asian-Canadians have experienced temporary or permanent job loss or reduced work hours amid the pandemic, compared to 34 per cent of white participants.

Southeast Asian and Korean groups both reported that 40 per cent have experienced a work disruption during COVID-19, followed by Black participants (38 per cent), South Asian (37 per cent), Latin American (34 per cent), Arab (33 per cent) and Chinese (31 per cent).

The survey also asked participants about the impact of COVID-19 on their ability to meet financial obligations such as rent or mortgage payments, utilities and groceries. Most visible minority groups surveyed reported a "strong" or "moderate" negative financial impact from COVID-19.

The highest negative financial impacts were reported among Arabs, West Asians and Filipinos.

The data was collected from more than 36,000 Canadians through an online crowdsourcing questionnaire between May 26 and June 8.

According to the data, since visible minorities often have lower incomes and more precarious employment than the white population, they have fewer resources to manage income losses brought on by work interruptions.

The survey found that the differences in financial impacts between most visible minority groups and white participants decreased but remained large after considering their differences in jobs, immigration status, pre-COVID employment status and demographic characteristics.

Of the participants surveyed, 19 per cent have applied for financial aid from the federal government, including the Canada Emergency Response Benefit and Employment Insurance, with the majority of applicants receiving support.

Among those participants who reported a "strong" or "moderate" impact of COVID-19, South Asians, Chinese and Japanese reported similar rates of applying for and receiving financial support as white participants, while the rate was particularly high among Filipinos (65 per cent) and Koreans (68 per cent).

Statistics Canada notes that the survey data is not based on random selection and that the findings should not be interpreted to represent the overall Canadian population.