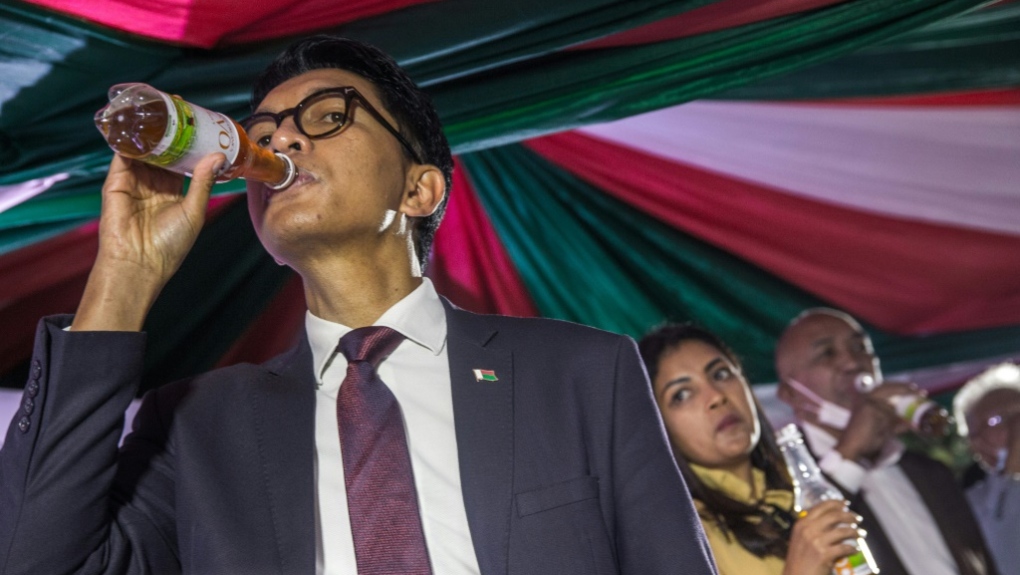 ANTANANARIVO, MADAGASCAR -- Ambulance sirens wail almost incessantly, the hospitals are swamped and the sports stadium has been turned into a 250-bed field hospital.

Antananarivo, the capital of Madagascar, is grappling with a flood of coronavirus cases -- a surge starkly at odds with the country's flamboyant claim to have devised a herbal cure for COVID-19.

On Tuesday, the impoverished Indian Ocean island passed the symbolic threshold of 10,000 recorded cases, 93 of which have been fatal.

Today, the caseload is rising by between 300 and 400 each day, nearly triple or quadruple that of a few weeks ago.

The authorities have several explanations for the phenomenon. One is that a rise in testing has uncovered more positive cases. A second is that infections are being driven by the capital's dense population.

And then there is a third explanation: that people fell sick because they failed to drink Covid-Organics -- the concoction, also called CVO, that President Andry Rajoelina is controversially pitching as a cure for the virus.

"The number of cases is rising more and more... We are only admitting the seriously ill," the director of the city's Andohotapenaka Hospital, Nasolotsiry Raveloson, told AFP.

Health Minister Ahmad Ahmad sounded the alarm last week -- but at a political cost to himself.

He sent out a letter to international aid donors, saying the trend was now "very critical... with notable flare-ups in certain regions, particularly in Antananarivo."

The government reacted tartly, describing the appeal as "a personal initiative", taken "without consulting" either the government or Rajoelina.

"It is clear that many crucial points in the management of this health crisis have escaped the vigilance of the minister of public health," it said scathingly.

CVO was launched to the world in April by Rajoelina himself.

"This herbal tea gives results in seven days," he said, sipping a dose. "I will be the first to drink this today, in front of you, to show you that this product cures and does not kill."

The drink is prepared with artemisia, a plant with proven efficacy in malaria treatment.

But there is no scientific evidence to back the claims -- and a host of medical experts, led by the World Health Organization (WHO) and US Centers for Disease Control (CDC), have loudly warned of the risk of taking concoctions that have not been vetted for safety.

Many in Madagascar clearly have doubts of their own.

"To see whether CVO works, all you have do to is look at the number of cases," said Mirato Rabearson Mahefamanana, a general practitioner. "Why are there so many right now?"

"I consulted four private doctors, and none of them prescribed me with Covid-Organics."

Marcel Razafimahatratra, a sociologist, said: "If I am unfortunate enough to catch this disease, I prefer to be treated by doctors who don't use CVO."

Yvonne Ravaoalisoa, a 60-year-old trader who lives with her two nieces, disagreed.

"Since we've been taking CVO, none of us at home has fallen sick," she said.

Opposition MP Liantso Bina Andriamanjato is also a fan. "It's a simple but effective remedy, which cured me," he insisted.

After its blockbuster introduction, CVO was sold in retail outlets, given to schoolchildren and distributed to health centres, although its visibility has discreetly declined in recent weeks.

Madagascar dispatched the drink to several African countries, but doubt about its claims prevail there too.

In the Republic of Congo, "test results point towards limited effectiveness," said Alexis Elira Dokekias, a senior official in charge of coronavirus admissions.

In Nigeria, the national drugs watchdog found no evidence of curative properties, according to the health ministry, and stocks of the drink sent by Madagascar remain in storage.

Misinformation on the virus is proving highly contagious

Most B.C. students to return to school for full-time in-class learning in September

Half of coronavirus patients given ventilation died: German study