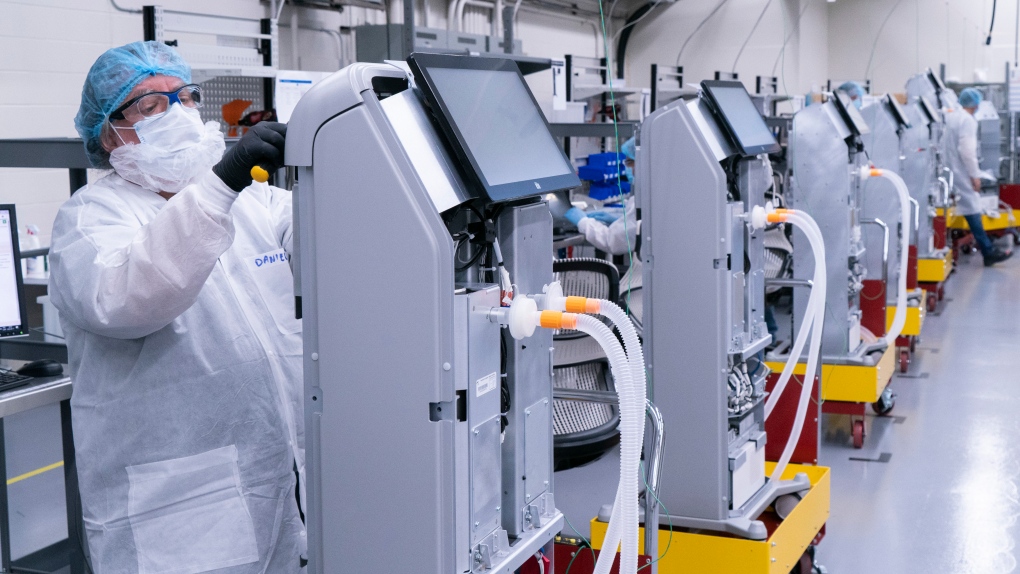 A worker assembles a CAE Air1 ventilator at the CAE plant in Montreal, on Wednesday, June 17, 2020. The aviation training company received the certification from Health Canada and will produce 10,000 ventilators for the Canadian government by October. The ventilators will be distributed to hospitals across the country. (THE CANADIAN PRESS/Paul Chiasson)

OTTAWA -- Only a small fraction of the 40,000 new ventilators Canada ordered for hospitals last spring have already been delivered but several companies involved say their production lines will start delivering the products faster in the next few weeks.

The promise of new arrivals comes as Canada's chief public health officer, Dr. Theresa Tam, warned Friday that a fall surge of COVID-19 cases could overwhelm the health-care system, including its supply of critical care beds and ventilators.

"What we know based on what we learned from other countries and cities that had a devastating impact in that initial wave, if you exceeded that capacity the mortality goes up really, really high," she said.

Flu season and other respiratory infections common in the fall could put added pressure on the system if COVID-19 flares up in a big way.

Tam said there were many lessons learned from the spring, when the government was ill-prepared and without enough protective equipment for health-care workers, and feared a massive surge of COVID-19 would overwhelm the health-care system.

"We are much better prepared than we were before," she said.

In March, Canadians watched in horror as northern Italy's COVID-19 outbreak overran its health-care system, leaving doctors to choose which patients got a ventilator and which were left without one. That experience, coupled with warnings it could happen here too, compelled federal and provincial governments to order thousands of new ventilators.

But much like surgical face masks and N95 respirators, Canada didn't already produce many ventilators domestically, and getting them from international sources is tough when global need for new ventilators is in the hundreds of thousands. So Canada asked firms here if they could step up, and out of that four new consortiums to build ventilators were formed.

A fifth contract was signed with Thornhill Medical, a Toronto firm that at that point was making about 50 of its portable breathing machines a month.

Paul-Emile Cloutier, the president of national health-care advocate HealthCareCAN, said there is concern about the status of the government's orders for personal protective equipment and ventilators ahead of the possibility COVID-19 will surge again in Canada this fall.

"Details are crucial as we prepare for the expected next wave of COVID-19," he said.

Procurement Minister Anita Anand said Friday the government is pushing on to get the entirety of the orders in place. A statement from her department said "Canada currently has sufficient ventilators to meet current demands" and that the ones on order are to bolster existing Public Health Agency of Canada stockpiles, as well as the units already in hospitals and provincial warehouses across the country.

But Health Canada won't say how many ventilators the country now has in total. It will also not disclose any modelling for how many could be needed in a worst-case scenario situation. In March there were about 5,000 ventilators nationally, and another 500 in the national emergency stockpile.

Canada's ability to plank the COVID-19 curve in the spring meant warnings about running out of ventilators never came to fruition.

"We have a little bit more elbow room to do things in a bit of a controlled manner but I would say we're looking to get it done this year," he said.

"We're all concerned about a second wave and being ready for that and so we're on board to deliver for that."

Canadian Emergency Ventilators is still waiting for Health Canada approval before it can start shipping its promised 7,500 machines. It submitted the documents in June and it is taking a bit longer than expected to get the green light.

Once that happens, the Public Health Agency of Canada would have to test the product, and then the units that have already been built could be shipped, said Walmsley. He is still hopeful to fill the order by the end of the year.

Thornhill Medical CEO Lesley Gouldie said her company's partnership with Linamar, a manufacturer based in Guelph, Ont., has been a great success. Thornhill is to provide 1,020 machines to Canada, and has shipped 27 so far.

Gouldie said Linamar can make as many as 100 of the units a week, but getting the supplies for the 1,500 parts that make up their portable device proved to be difficult in a pandemic.

"The limiting factor is the supply chains," Gouldie said.

She said the kinks are mostly worked out now, and she expects to ship enough machines each week to fulfil their contract by early December.

Rick Jamieson, the CEO of FTI Professional Grade, said they expect to fulfil their entire contract for 10,000 ventilators by Dec. 12. FTI is one of several companies in a consortium called Ventilators for Canadians, which has already delivered 132 ventilators. Another 120 are on track for delivery next week and 240 in the last week of August.

"We have activated a fourth shift to increase production knowing that a second wave is likely this fall and winter," said Jamieson.

Montreal's CAE received Health Canada approval for its new ventilator on June 17, and said that day it expected to begin shipping "hundreds each week." It has a contract to deliver 10,000.

The final company, Vexos, was the last to sign a contract, and had to submit its product to Health Canada as well, and began shipping in late July.

This report by The Canadian Press was first published Aug. 15, 2020

'Don't let this happen to anyone else': families seek change to border rules

Berlin brothels reopen after lockdown with one main restriction