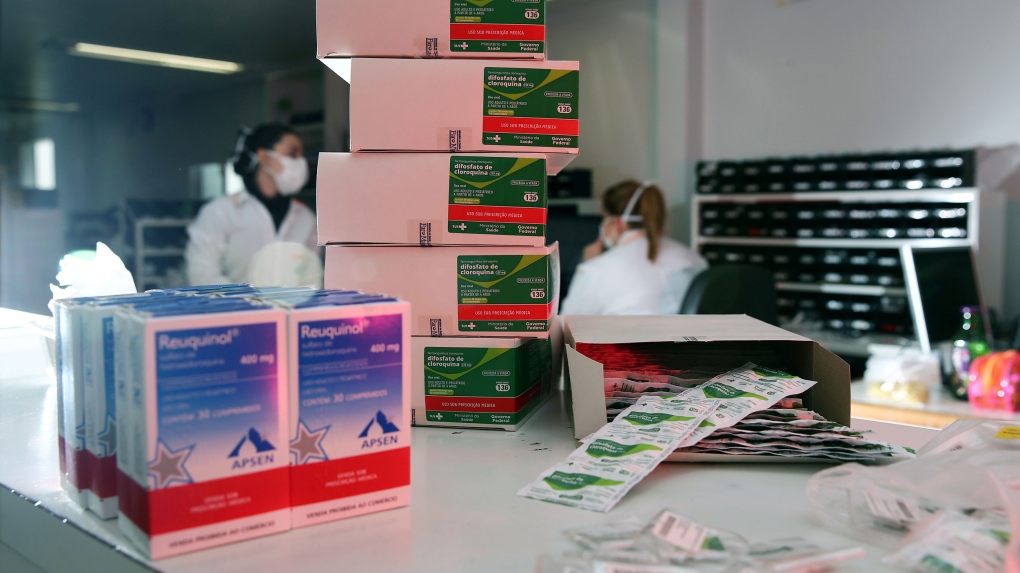 Boxes of hydroxychloroquine and chloroquine are seen at the pharmacy of the Nossa Senhora da Conceicao hospital in Porto Alegre, Brazil, on May 26, 2020. (Diego Vara/Reuters/CNN)

It was the kind of gift that should have come with a return slip.

The Trump administration's donation of 2 million doses of hydroxychloroquine to Brazil -- one of a handful of countries that still recommend the drug for COVID-19 -- has been mostly untouched since arrival, Brazilian officials have told CNN. Vast quantities of the pills are still sitting in storage in the Brazilian megacity of Sao Paulo, and one former health minister believes they may eventually have to be destroyed.

The pills' fate in Brazil is appropriate given their medical uselessness against COVID-19: Study after study has shown hydroxychloroquine does not work to treat the coronavirus, and may be harmful. Yet Brazilian President Jair Bolsonaro insists that hydroxychloroquine helped him recover from a two-week infection, and Brazil's health ministry advises that doctors prescribe the drug to treat mild cases, even for pregnant women. Meanwhile, the number of coronavirus infections in the country is skyrocketing.

So why haven't the pills been distributed?

The medication arrived in Brazil on May 31. At the time, the White House said the delivery -- issued when several studies had already shown the drug was ineffective against COVID-19, if not dangerous -- would "be used as a prophylactic to help defend Brazil's nurses, doctors and health care professionals against the virus. It will also be used as a therapeutic to treat Brazilians who become infected." It also said the drug would be part of a study there, and ventilators would also be donated.

The delivery soon went into storage near Sao Paulo's airport, Renato Strauss, a spokesman for the Health Ministry said. Two months later, the pills are still being held in a logistics center, according to Strauss.

The way the U.S. medicine was configured may have sealed its fate before arrival. The hydroxychloroquine came in packet sizes of a hundred 400mg pills, according to the state health secretaries association, CONASS. They have to be broken down to smaller numbers before they can be distributed, Strauss said.

That work would be carried out at a Brazilian Army laboratory in Rio de Janeiro, and other official labs, he added. Strauss did not explain why that has yet to happen, although experts say this could be because the process is costly and time-consuming. Another spokeswoman for the health ministry said Anvisa -- Brazil's health regulatory body -- gave permission for the process to begin last week.

A spokesman for the U.S. Embassy in Brasilia declined to answer questions and referred further queries to the White House, which did not respond to emails.

New Jersey Sen. Robert Menendez, the top Democrat on the Senate Foreign Relations Committee, however, noted that the U.S. Food and Drug Administration has revoked authorization for hydroxychloroquine as a COVID-19 treatment. "President Trump clearly doesn't care about sound medical advice. If he did, we would have taken steps to stop the COVID-19 outbreak before it killed 150,000 Americans, and the administration wouldn't knowingly be exporting a therapy that could adversely impact thousands of Brazilians. It's reprehensible," Menendez told CNN.

The U.S. donation arrived in a country already overflowing with the drug. The Brazilian army and state keep an annual stock to combat malaria, but owing to false assertions that hydroxychloroquine would help defeat the coronavirus, both escalated its manufacture and in April ordered a large amount of precursor ingredients from India.

Following scientific guidance, many Brazilian doctors have stopped prescribing hydroxychloroquine despite the government's enthusiasm for it. But in a sign of how pervasive Bolsonaro's backing for the drug has been, a recent survey of doctors across Brazil reported that half of them felt pressured by patients to give the ineffective drug.

"It's just false hope," he told CNN. "Poor people have a hard time getting the health system to work and they say 'at least I have this'. It's more like a placebo, something they can take and be grateful to (Bolsonaro)," he said. "It's a political choice, nothing about health. He uses the drug to say to people they can go back to work." Bolsonaro has recently said the use of the drug is a matter between patient and doctor, but has insisted it has helped cure him from a two week infection.

He believes that the U.S. gift will likely be destroyed after a few years. "I don't think they are going to have enough people to take all those pills. They're probably going to be kept in some lab, in some airport, and probably they're going to have to destroy it," he said.

The country's surplus of hydroxychloroquine comes amid an urgent need for other drugs to help COVID-19 patients. Pedro Archer, director of the Rio de Janeiro doctor's union, and an ICU doctor himself for months in the pandemic, said that he feared the focus on hydroxychloroquine has diverted government attention away from obtaining medications that coronavirus patients actually need.

"Midazolam, fentanyl, noradrenaline," he said, referring to vital drugs used to keep patients alive and comfortable in an ICU. "Public health is always running out of these."

He added: "If the U.S. wants to help Brazil, send these, not hydroxychloroquine."