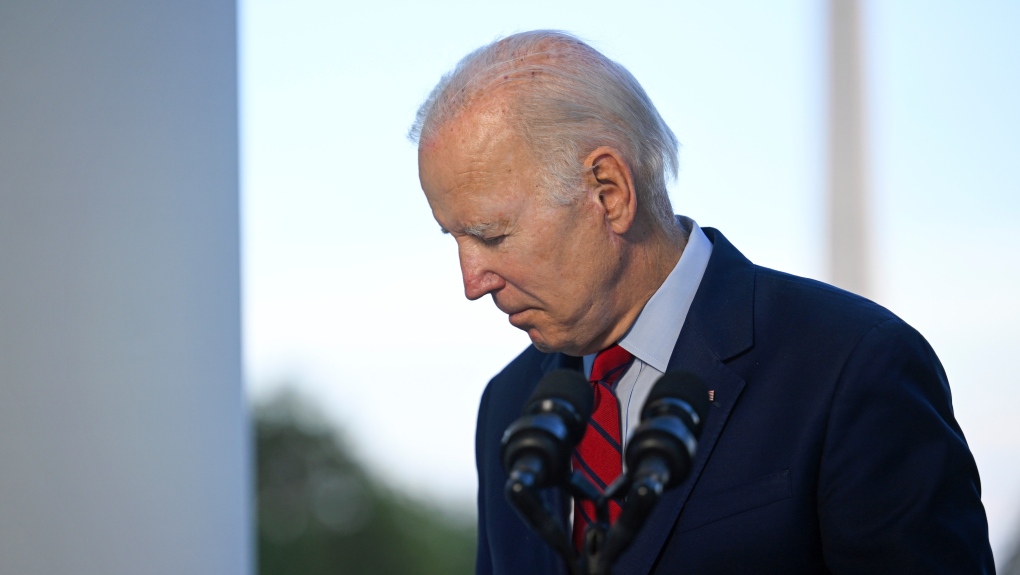 U.S. President Joe Biden looks down as he finishes speaking from the Blue Room Balcony of the White House Monday, Aug. 1, 2022, in Washington, as he announces that a U.S. airstrike killed al-Qaida leader Ayman al-Zawahri in Afghanistan. (Jim Watson/Pool via AP)

U.S. President Joe Biden has tested negative for COVID-19 but will remain in isolation pending a second test, his physician announced in a letter Saturday.

"The President continues to feel very well," Dr. Kevin O'Connor wrote. "Given his rebound positivity which we reported last Saturday, we have continued daily monitoring. This morning, his SARS-CoV-2 antigen testing was negative. In an abundance of caution, the President will continue his strict isolation measures pending a second negative test as previously described."

Biden has not left the White House for 17 days, after initially testing positive for COVID-19 on July 21. After taking a five-day course of Pfizer's antiviral drug, Paxlovid, Biden tested positive for a rebound case of COVID-19 last Saturday and resumed isolation. There are currently no events on his public schedule for the weekend.

During isolation, the President has participated virtually in public events from the White House residence. On two occasions, he delivered socially distanced remarks to a restricted pool from the Blue Room balcony, announcing a successful strike that killed al Qaeda leader Ayman al-Zawahiri Monday and signing two bills cracking down on COVID-19 relief fraud Friday.

The President and first lady Jill Biden are scheduled to travel on Monday to visit Kentucky after deadly floods in the eastern part of the state killed dozens of people and devastated the area.

According to the U.S. Centers for Disease Control and Prevention, "People with recurrence of COVID-19 symptoms or a new positive viral test after having tested negative should restart isolation and isolate again for at least 5 days."

During Biden's first bout with the disease, he experienced mild symptoms, including runny nose, fatigue, high temperature and a cough, according to his doctor. The five-day course of Paxlovid the President completed requires a doctor's prescription and is available via emergency use authorization from the U.S. Food and Drug Administration for treatment of mild-to-moderate COVID-19 in people 12 and older who are at high risk of severe illness.

The CDC issued a health alert to doctors on May 24 advising that COVID-19 symptoms sometimes come back, and that may just be how the infection plays out in some people, regardless of whether they're vaccinated or treated with medications such as Paxlovid. The CDC said that most rebound cases involve mild disease and that there have been no reports of serious illness.

Biden is fully vaccinated and received two booster shots. He received his first two doses of the Pfizer/BioNTech COVID-19 vaccine ahead of his inauguration in January 2021, his first booster shot in September and his second booster vaccination in March.