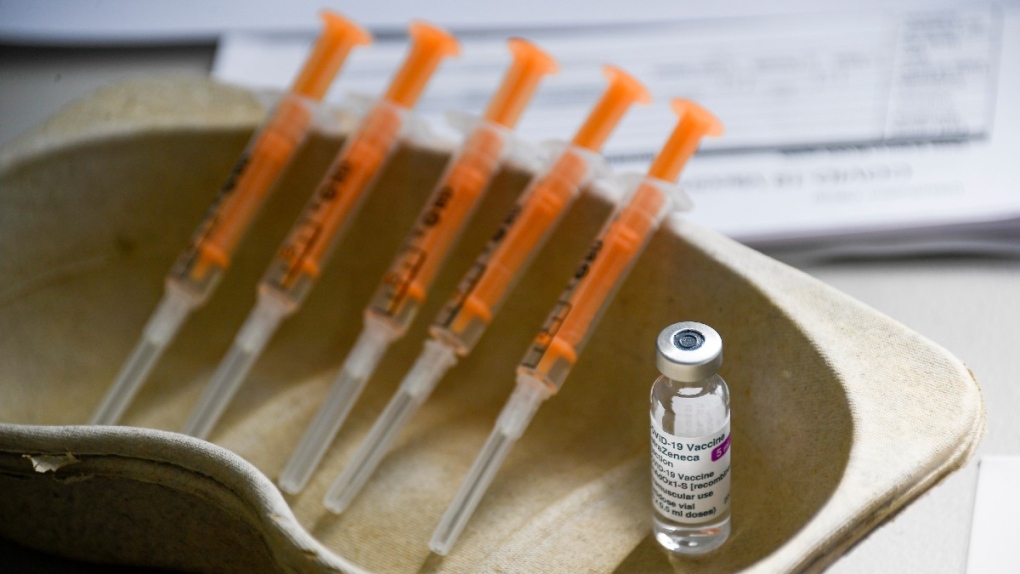 A vial and syringes of the AstraZeneca COVID-19 vaccine, at the Guru Nanak Gurdwara Sikh temple, in Luton, England, on March 21, 2021. (Alberto Pezzali / AP)

LONDON -- People under 40 in Britain will not be given the Oxford-AstraZeneca coronavirus vaccine if another shot is available because of a link to extremely rare blood clots, the government said Friday. It said the change would not affect the goal of giving all U.K. adults at least one vaccine dose by July.

The Joint Committee on Vaccination and Immunization said people aged 30 to 39 without underlying health conditions should receive an alternative vaccine, "where available and only if this does not cause substantial delays in being vaccinated." Last month it gave the same advice for people under 30.

England's deputy chief medical officer, Jonathan Van-Tam, said the government expects to be able to follow the new advice and still meet its target of giving everyone over 18 a vaccine jab by July 31.

"We have to maintain the pace and scale of the U.K. vaccination program," Van-Tam said, adding that the AstraZeneca vaccine is safe and effective and "thousands are alive today" because they received it.

Britain has recorded more than 127,500 coronavirus deaths, the highest toll in Europe. But recent infections and deaths have plummeted thanks to extensive lockdowns and a rapid vaccination program. Two-thirds of U.K. adults have received at least vaccine jab and almost a third have had both doses.

A majority have had the AstraZeneca shot, though Britain is also using vaccines made by Moderna and Pfizer-BioNTech.

Several countries in Europe have chosen only to use the AstraZeneca vaccine on older people because of evidence there is a link to a type of very rare blood clot, accompanied by low blood platelet count.

British health officials say the risk from COVID-19 far exceeds any risk from the AstraZeneca vaccine for the vast majority of people, but the calculation is "more finely balanced" for younger groups, who tend not to suffer serious illness from coronavirus infections.

Up to April 28, Britain's medicines regulator had received 242 reports of blood clots accompanied by low platelet count in people who had received the AstraZeneca vaccine, out of 28.5 million doses given. There were 49 deaths.

Most of the cases occurred after the first dose, and health officials said there were no concerns about people getting second AstraZeneca shots.

The AstraZeneca vaccine, which is cheaper and easier to store than many others, is critical to global immunization campaigns and is a pillar of the U.N.-backed program known as COVAX that aims to get vaccines to some of the world's poorest countries.

The success of Britain's vaccination campaign is allowing the government to gradually lift lockdown measures. Later Friday, it's expecting to confirm that it will end a ban on overseas vacation travel, revealing a list of countries that U.K. residents will be able to visit starting later this month without having to quarantine upon return.

The "green list" of countries with low coronavirus infection rates is likely to include Israel, which has vaccinated most of its population, along with Malta and Gibraltar.

Foreign holidays are currently illegal under sweeping powers the British government has taken to restrict business and everyday life during the coronavirus pandemic.

The blanket travel ban is due to end on May 17. Pubs and restaurants in England can reopen indoor areas that day, and venues including theatres and cinemas can reopen to limited audiences. The other parts of the U.K. -- Scotland, Wales and Northern Ireland -- are following slightly different reopening timelines.