TORONTO -- Canada has been seeing its highest COVID-19 numbers since January this past week, in what experts suggest is due to a combination of the spreading of variants, provinces reopening too early, and hospitals that are still recovering from the second wave.

As of Wednesday evening, there were 5,858 new cases reported across the country today, with a seven-day average of over 8,250 cases. Last Thursday, Canada recorded 9,569 new cases, the highest number of cases recorded in a single day since the start of the pandemic. 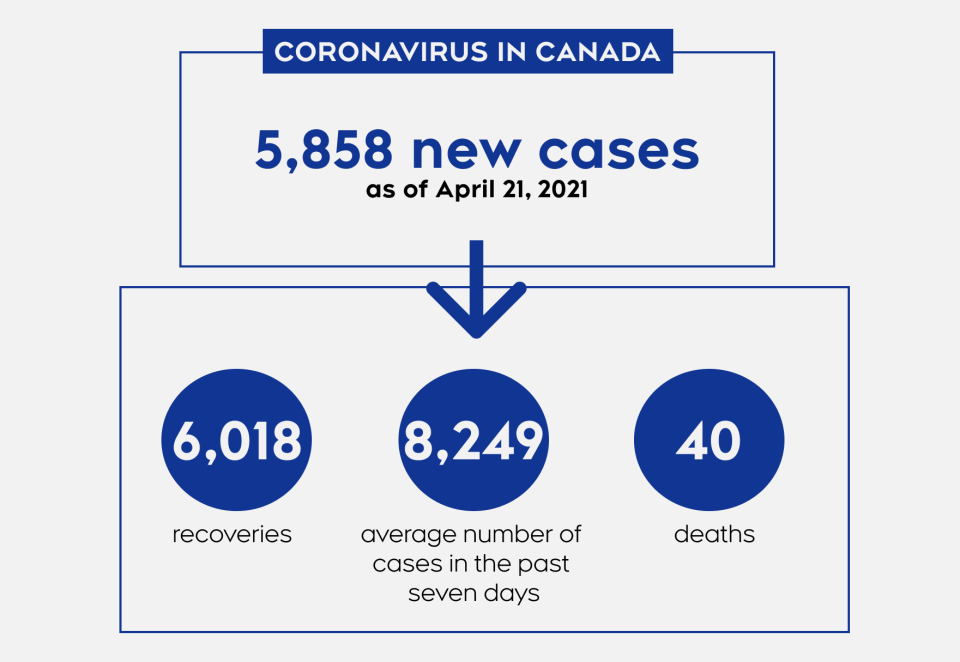 With Ontario reporting 4,212 new cases, the province makes up over 70 per cent of the country’s new COVID-19 cases on Wednesday.

“We had provinces that were in various stages of reopening, and some of them reopened rather quickly following their second wave getting under control. And then of course, we have the emergence of variants of concern which has caused more explosive outbreaks,” Dr. Isaac Bogoch, infectious diseases specialist based at Toronto General Hospital, told CTVNews.ca.

“When you have a more transmissible virus plus opportunities for this virus to be transmitted, and when different provinces took steps to reopen quickly, you can’t be surprised when you have an explosion of cases,” Bogoch added.

As of Wednesday evening, more than 3,300 Canadians are in hospital currently due to COVID-19, and over 1,000 patients are admitted to the ICU.

Bogoch said the healthcare system was already “overloaded” prior to the third wave, with hospitals still treating patients from the previous wave.

“In many places, for example Ontario, we never really decompressed our intensive care units from the second wave. We had a third wave come in very short after the second wave, so you’ve got more explosive outbreaks with the variants that also caused more significant illness proportionately compared to the strains of COVID-19 we had earlier,” he said.

“That trifecta of more transmissible variants that cause more significant illness and proportionally more people ending up in the hospital, rapid reopening that’s providing more opportunities for transmission, and a healthcare system that still hasn’t decompressed from the second wave really puts us into the mess that we’re at right now.”

The three variants of concern in Canada – B.1.1.7, B.1.351, and P.1 – are what experts are indicating has taken over the main strain, and is one of the root causes in the growing number of COVID-19 cases in Canada due to their more transmissible nature.

While the B.1.1.7 strain has the highest number of infections out of all three variants of concern, the P.1 strain has seen a surge in cases, having seen its first reported case on Feb. 7 and now reporting 2,479 cases.

Dr. Kashif Pirzada, emergency physician in Toronto, said that the spreading of the new variants, particularly the P.1 strain, will cause more severe illnesses in younger people.

“It seems to be more contagious and it seems to cause more severe illness in younger people. It also seems to reinfect people who have had COVID before, so previous immunity doesn’t seem to work,” he told CTVNews.ca

With the increased presence of variants and the healthcare system seeing a larger number of hospitalizations, Pirzada said that the next few weeks, particularly in Ontario, will be extremely difficult.

“Things are going to get worse in the next few weeks. ICU admissions are still coming in large numbers,” he said. “The system in Ontario is going to be stretched far beyond it’s ever been stretched before.”