'They're not machines': Deaths of health-care workers underline the strain of COVID-19

TORONTO -- A few months into the pandemic, a registered nurse in a Toronto-area long-term care facility told her son that they were “overworked and understaffed” at her job, and that she believed change was needed.

He recorded the conversation, but it’s difficult for him to listen back to her voice now — his mother, 57-year-old Maureen Ambersley, died this week after contracting COVID-19.

In Canada, some 30 health-care workers have died since the pandemic began.

Ambersley, who worked at a care facility owned by Extendicare, told her son, Floyd, in May that working conditions were difficult.

COVID-19 had changed the nature of her job “in a way that impacts the whole workforce,” she said in an audio recording provided to CTV News.

“The workforce atmosphere is more tense, and everybody is very, very alert.”

At the care home, they didn’t always have PPE, she revealed, adding that other days they “have one set of PPE for the entire day.”

In the conversation, she described situations where staffers would be “running” to provide care to one resident when another bell went off with another resident asking for help.

“If we had the proper staffing, while one is with one [resident] and the bell goes off, the support worker who was free would be able to go and assist that other resident,” she said.

Ambersley kept working at the care home past May, even though conditions didn’t improve much, according to her son, Floyd Ambersley.

“They still didn’t get enough staff,” he told CTV News, adding that everyone had to do extra hours to try to keep residents safe and healthy.

But the job was important to his mother.

“My mom really just liked helping people,” he told CTV News. “And the whole reason why she even got into the field was to assist people and so that's what really mattered [and why she] kept going in.”

Although her drive to help others kept her in her job, she was still terrified of catching COVID-19 — a fear that tragically came true.

Ambersley also didn’t want to pass it on to family members she lived with, he said.

“She loves her grandkids, so she didn't want them to catch it.” 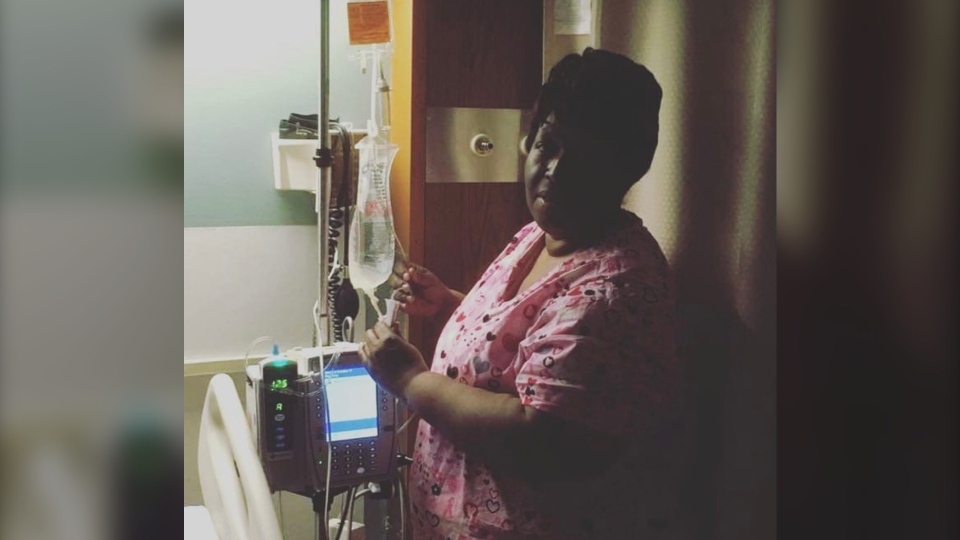 It’s hard, he admitted, to listen back to the recording of her describing her work conditions in May.

“Even doing these interviews is tough,” he said. “Especially hearing her voice. It's a little upsetting because I hear [her] voice and I hear how she wants all this stuff, but […] I have to also remember the reality, that she's not here.”

Despite the pain of talking about his mother, he is raising his voice because he wants others to be aware of what she and other frontline workers have gone through and are still going through.

“Knowing that there's not a lot of help and then you're kind of forcing [them] into putting in crazy overtime,” he said. “It feels really unfair.”

Only three days ago, the very first death of an Alberta health-care worker was announced: 61-year-old Joe Corral, who worked as a health-care aide at a long-term care centre.

The latest is a Calgary physician in his 70s whose infection originated in the community, not the worksite, according to officials. He was one of the 25 deaths reported to Alberta health on Wednesday.

During the pandemic, many people get to work from home, but front-line and health-care workers have to actively put themselves in harm’s way just to do their jobs, Ambersley’s son pointed out.

“When it comes to medical care, it's tough because they understand that they have to help, but they're also people too,” Floyd said. “They're not like machines that are helping people. These are people helping people, they can get sick.”

He believes that governments need to be listening to requests from frontline medical workers and try to give them as much extra help with staffing and PPE as they need.

He said sometimes his mother would be so pressed for time due to staff shortages that she would have to go directly from moving one patient to another, and wouldn’t have time to fully change her PPE to prevent cross-contamination.

Linda Silas, president of the Canadian Federation of Nurses Union, pointed out that when health-care workers are at risk, everyone is.

“To bring safety in our communities, you have to ensure that health-care workers are safe, and the only way to do that is with occupational health and safety measures.”

Whether they are infected at work or in the community, Canada risks losing more frontline workers — a terrifying prospect for those who remain.

“Some of them are also thinking of taking early retirement, which is scary if they do that, because we need them more inside the system than outside the system,” Paul-Emile Clouter, president and CEO of HealthCareCAN, told CTV News. “There's a sentiment of despair, a sentiment of one wanting to do good, but they are worried that they are exhausted and tired and that they can make mistakes.”

Silas pointed out that there are likely more deaths of frontline workers that we simply don’t know about.

“When I hear Maureen’s story, I really get mad,” she said. “Because it is so common knowledge that to prevent infection, you have to protect your health-care workforce. What happened in the long-term care sector is unforgivable.”

As for Floyd Ambersley, he said he doesn’t feel anger, but sadness, because there’s no individual person he can blame for his mother’s death.

Fact check: How accurate are PCR tests for the novel coronavirus?

Brazil passes 200,000 deaths from the pandemic, the second highest total around the globe

How does Canada's COVID-19 vaccine rollout compare to other countries?

U.S. registering highest deaths yet from the coronavirus

Students in southern Ontario will not return to class for in-person learning until Jan. 25

Trudeau, premiers to talk about pace of COVID-19 vaccinations in virtual meeting

What is non-essential travel? Experts say Canada's definition is too vague