The new words that are helping people cope with the pandemic 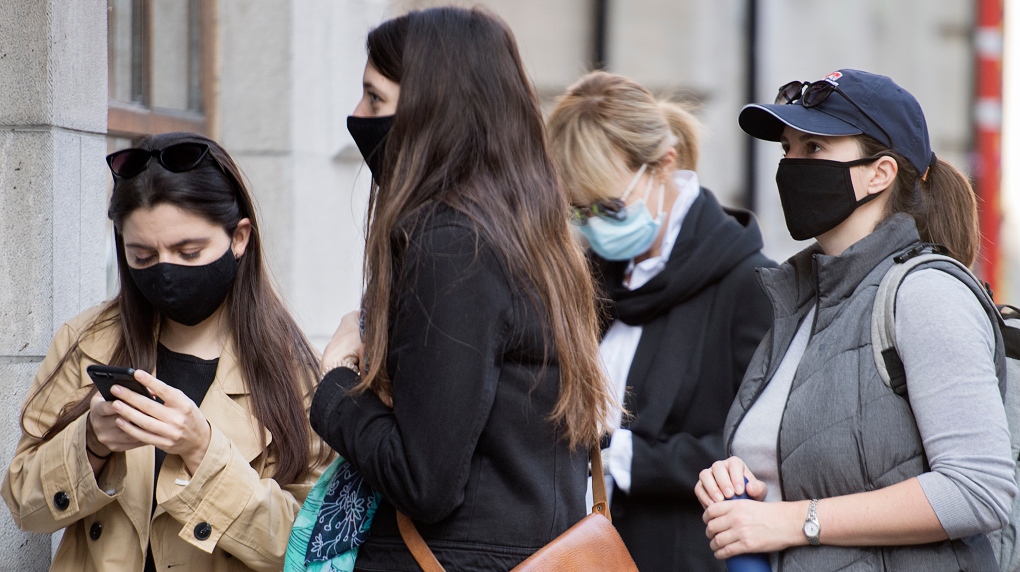 People wear face masks as they wait to enter a coffee shop in Montreal, Sunday, November 8, 2020, as the COVID-19 pandemic continues in Canada and around the world. THE CANADIAN PRESS/Graham Hughes

TORONTO -- From "covidiots" to "quarantine" and "Zoom bombing," many new words and phrases have become common in how people talk about the impact the COVID-19 pandemic is having on their everyday lives.

Michael Iannozzi, a linguist at Western University in London, Ont., told CTVNews.ca the creation of these new words "reflect what people are feeling" amid the pandemic and help individuals cope with their "new normal."

He explained in a telephone interview on Wednesday that these new words are being used by ordinary people in everyday dialogue to describe something that has not previously happened to them before.

"My parents are seeing words that I know they would never normally see because they’re words used by young people on TikTok or something like that, but they're seeing them now because there is no other words for those things," Iannozzi said.

Because of the sudden disruption in daily life, Iannozzi said people around the world began adopting official medical terminology used by health and government officials to better understand the situation they found themselves in. He says that terminology includes such words as "personal protective equipment (PPE),” "ventilation," "pathogen," "lockdown," "self-isolation," and "quarantine."

In 2020, the Oxford English Dictionary issued two special updates to include coronavirus-related language. Editors noted that these updates included new words brought on by the pandemic and the resurgence of not well-known terms, as well as obscure medical definitions not incorporated in previous editions.

"COVID-19" and "social distancing" were some of the newest terms added, in addition to the names of drugs that became part of the public discourse at the start of the pandemic, such as hydroxychloroquine and dexamethasone.

Iannozzi said people have also been creating their own, entirely new language to address the shift in their daily lives.

"You have such a new experience with COVID that's so different and weird that it sort of makes sense that you'd want to use new words and new phrases to sort of describe something that's that strange," he said.

According to Iannozzi, some of these new phrases include "covididiot," "Zoom bombing," "overzoomed," "quarantini," "maskne," and "doom scrolling," among others.

"Words like 'Zoom bombing' or 'quarantini'... I don't know how many people actually were making martinis, that's not something most people drink at home, but I think it's more just a symbol of how we were feeling at that time," Iannozzi said.

Iannozzi explained that new phrases like these would typically last for a "couple of months online somewhere" pre-COVID-19, but now "they're everywhere" because they're the first of their kind to represent a new, shared experience.

While these new words may not stick around forever, Iannozzi said they will be difficult for some people to forget.

"Something like Zoom might not be around in even 10 years, but we'll still have that concept," he said. "Even if Zoom no longer exists, the words will still stay with us in whatever our experiences were."

In Germany, linguists have compiled more than 1,200 new coronavirus-related words in an effort to capture what life is like amid the pandemic. However, not all of the new words and phrases have positive connotations.

Ai Taniguchi, an assistant professor with the University of Toronto's Department of Language Studies, told CTVNews.ca on Wednesday that many new insults and slurs have been created in reaction to COVID-19.

"We hear words like 'China virus' being used to stigmatize the Asian community. This happened during the 1918 flu pandemic as well, where it was dubbed the 'Spanish flu,'" Taniguchi explained in an email.

Taniguchi said new words have also posed a challenge to those whose first language isn't English, including international students, new Canadians, and refugees.

She says the addition of new COVID-19-related words, coupled with public health measures to help limit the spread of the virus, have led to fewer opportunities for these groups to practice speaking basic English.

Taniguchi said new slurs can also impact how these populations interact within their own communities, as well as the rest of society.

"This type of linguistic creativity fuels hate speech and hate crime, which is not OK," she said.

Taniguchi said it is important to be aware of new derogatory terms and "use the knowledge to be allies to those oppressed."

"We don't want to normalize and trivialize hate speech. People create slurs and slurs can stick around in a language, which is unfortunate but true," Taniguchi said.

"We need to normalize calling out racist behaviour, and that includes racist linguistic behaviour."

'I don't recognize the person that I am': COVID-19 long hauler hopes new clinic will provide treatment, answers

The new words that are helping people cope with the pandemic

Which face mask is best for communication? A new study weighs in

Hospitalization risk 64 per cent higher with B.1.1.7 coronavirus variant: study