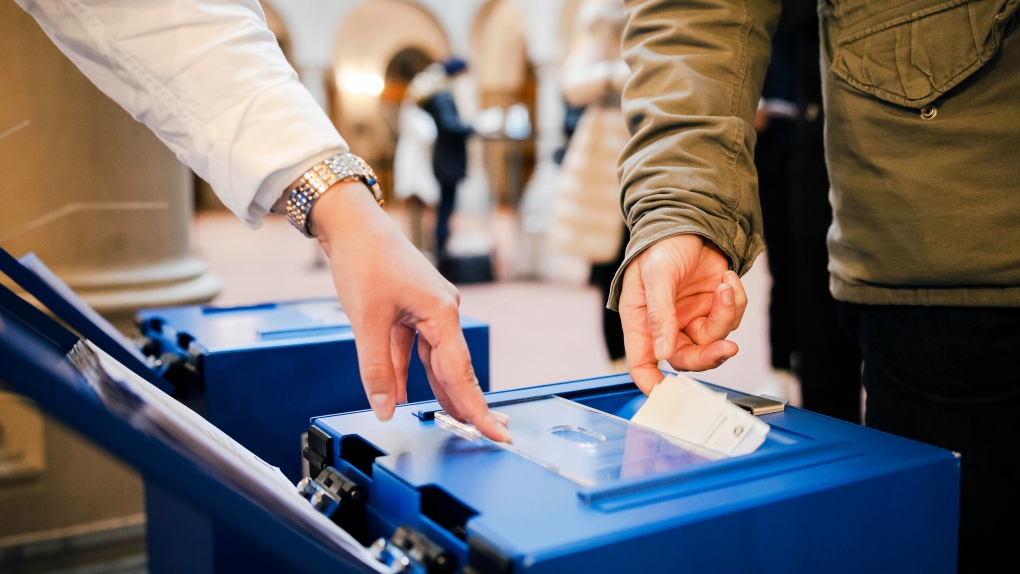 Voters cast their ballots at a polling station for three national bills, including the COVID-19 law and several cantonal and communal proposals, at the Zurich City Hall in Zurich, Switzerland on Nov. 28, 2021. (Michael Buholzer/Keystonve via AP)

BERLIN -- Swiss voters on Sunday gave clear backing to legislation that introduced a system with special COVID-19 certificates under which only people who have been vaccinated, recovered or tested negative can attend public events and gatherings.

Final results showed 62 per cent of voters supporting the legislation, which is already in force. The referendum offered a rare bellwether of public opinion on the issue of government policy to fight the spread of coronavirus in Europe, which is currently the global epicentre of the pandemic.

The vote on the country's "COVID-19 law," which also has unlocked billions of Swiss francs (dollars) in aid for workers and businesses hit by the pandemic, came as Switzerland -- like many other nations in Europe -- faces a steep rise in coronavirus cases.

The Swiss federal government, unlike others, hasn't responded with new restrictions. Analysts said it didn't want to stir up more opposition to its anti-COVID-19 policies before they faced Sunday's test at the ballot box -- but that if Swiss voters gave a thumbs-up, the government may well ratchet up its anti-COVID efforts.

Health Minister Alain Berset said, with the result, authorities "still have the necessary instruments to manage the crisis, and we can, if necessary, adjust the instruments to developments."

Of the country's 26 cantons (states), only two -- Schwyz and Appenzell Innerrhoden, both conservative rural regions in eastern Switzerland -- voted against the legislation.

"A decision has been made and we must come together now to get through this winter as well as possible," Berset said. "This is an appeal for unity but also for respect for decisions that have been taken."

Turnout on Sunday was 65.7 per cent, unusually high for a country that holds referendums several times a year.

On Tuesday, Swiss health authorities warned of a rising "fifth wave" on infections in the rich Alpine country, where vaccination rates are roughly in line with those in hard-hit neighbors Austria and Germany at about two-thirds of the population. Infection rates have soared in recent weeks.

The seven-day average case count in Switzerland shot up to more than 5,200 per day from mid-October to mid-November, a more than five-fold increase. Austria, meanwhile, has imposed a national lockdown to fight the rising infections.

What we know and don't know about Omicron variant

Should Canada revisit its booster strategy in the face of a new variant?