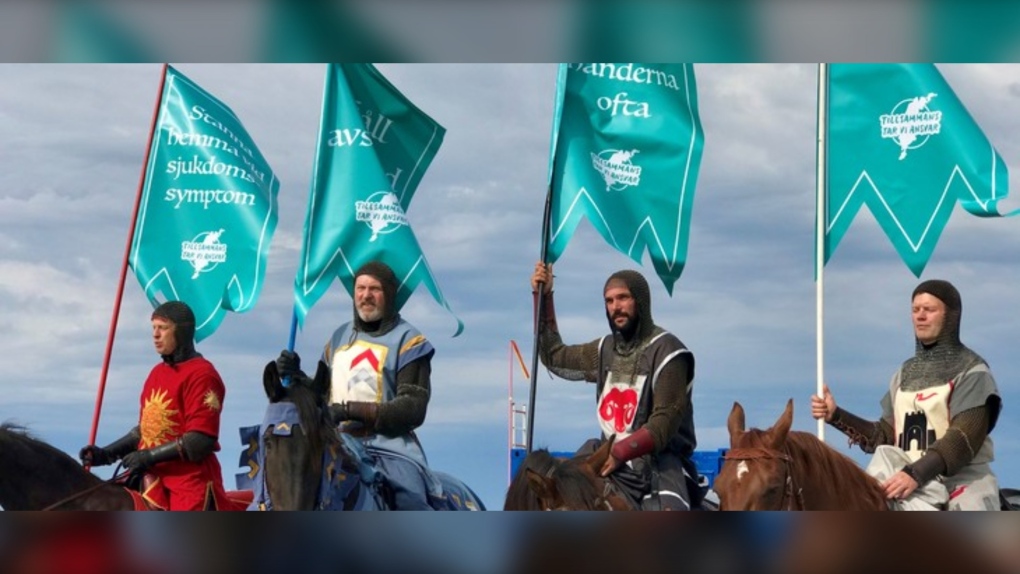 Gotland has hired a group of medieval knights to patrol well-visited places on the island and ensure tourists adhere to physical distancing measures. (Source: Region Gotland)

TORONTO -- As many parts of the world attempt a return to a 'new normal' amid the ongoing COVID-19 pandemic, one nation has come up with a unique way to encourage physical distancing.

The Swedish island of Gotland, located in the Baltic Sea, has hired a group of armoured knights to patrol well-visited places in the region on horseback and ensure tourists adhere to physical distancing measures.

Gotland's government announced July 17 that the medieval re-enactment troupe from the Torneamentum Knights' Association would help remind visitors to do their part to minimize the risk of spreading the virus.

To drive home the point, the knights also carry signs with messages in medieval font such as "keep your distance," "stay at home if you have symptoms" and "wash your hands often."

"We are both happy and proud that we have been called into this important and honourable assignment. For us knights, it is a matter of course to stand up when duty calls and we really look forward against taking on the task," Lennart Borg, project manager of Torneamentum, said in a press release.

The so-called "COVID knights" will be stationed at popular spots frequented by tourists this summer, including Gotland’s beaches and the medieval town of Visby.

"It's great that we got the knights involved. We think it will help to remind us of the messages we all know by now, but which are so easy to forget when we are distracted by other things during the summer," Gotland's acting chief infectious disease doctor Sven Montelius said in the release.

With 210 confirmed coronavirus cases and six deaths as of Wednesday, Gotland is one of the least-affected regions in Sweden. However, some officials have expressed concern that the island's healthcare system may become overwhelmed if tourists fail to follow public health guidelines.

Frida Ganshed, operations manager of Gotland's United Visiting Industry, said in the release that the knights are a "slightly different and fun approach" to helping everyone stay safe.

"It is so important to do everything we can to remind people to keep their distance and take responsibility. Hopefully the knights help us with that," Ganshed said.

Sweden has been criticized by other nations for its response to the pandemic. Unlike its neighbouring EU countries, Sweden never enforced a lockdown resulting in one of the highest death rates per capita among wealthy nations.

Sweden has registered more than 78,100 coronavirus cases and nearly 5,650 deaths, according to a global tally by Johns Hopkins University.

34 additional cases of COVID-19 in B.C. as recent surge continues

Nova Scotia students to return to class Sept. 8, with COVID-19 protocols in place