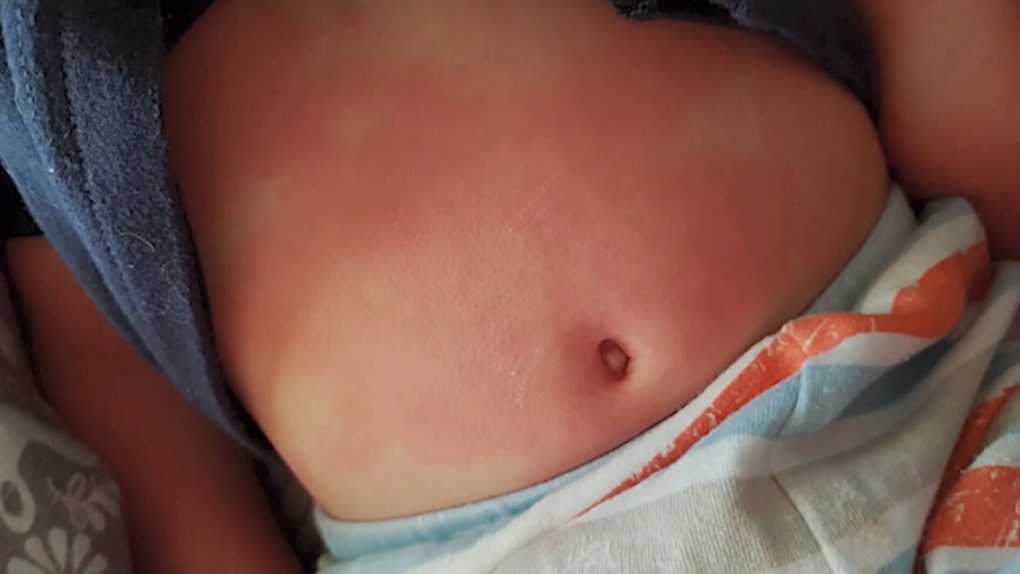 The stomach of a child with multisystem inflammatory syndrome in children (MIS-C) is seen in this image.

TORONTO -- Researchers behind a new study are warning that a rare and unusual inflammatory condition in children, believed to be linked to COVID-19, damages the heart to such an extent that lifelong monitoring and interventions may be needed.

According to the new study, cases of multisystem inflammatory syndrome in children (MIS-C) can strike seemingly healthy children without warning three or four weeks after asymptomatic coronavirus infections.

MIS-C is a condition that causes rashes and inflammation in severe cases and can lead to heart damage if not treated, similar to Kawasaki disease and toxic shock syndrome. However, the study suggests that the amount of inflammation in MIS-C surpasses these two similar pediatric conditions.

"Children did not need to exhibit the classic upper respiratory symptoms of COVID-19 to develop MIS-C, which is frightening," study author Alvaro Moreira told The University of Texas Health Science Center.

"Children might have no symptoms, no one knew they had the disease, and a few weeks later, they may develop this exaggerated inflammation in the body."

While researchers do not yet know what causes MIS-C, the U.S. Centers for Disease Control and Prevention says "many children with MIS-C had the virus that causes COVID-19, or had been around someone with COVID-19."

The study, published Friday in EClinicalMedicine, a medical journal of The Lancet, looked at 662 MIS-C cases reported worldwide between Jan. 1 and July 25. The study noted that almost half of patients who had MIS-C also had an underlying medical condition, and of those, half were obese or overweight.

Researchers reported that 90 per cent of children (581) suffered cardiac involvement and underwent an echocardiogram because "they had such a significant cardiac manifestation of the disease."

The study noted that the cardiac events were indicated by markers such as troponin, which is used to accurately diagnose heart attacks in adults. In some cases, researchers found that troponin was 50 times its normal level in children with MIS-C.

"Evidence suggests that children with MIS-C have immense inflammation and potential tissue injury to the heart, and we will need to follow these children closely to understand what implications they may have in the long term," the study read.

Researchers reported that 71 per cent of children with MIS-C were admitted to the intensive care unit (ICU) and at least 60 per cent presented with shock.

The findings showed that 22 per cent of the children admitted to ICUs required mechanical ventilation while only 4 per cent required extracorporeal membrane oxygenation (ECMO). The average length of stay in the ICU was about eight days.

Additionally, the study found that after developing MIS-C, all children studied reported having a fever, approximately 74 per cent had abdominal pain or diarrhoea, and 68 per cent suffered from vomiting.

"[MIS-C] can be lethal because it affects multiple organ systems. Whether it be the heart and the lungs, the gastrointestinal system or the neurologic system, it has so many different faces that initially it was challenging for clinicians to understand," Moreira said.

Researchers reported that therapies commonly used for Kawasaki disease, such as immunoglobulin and glucocorticosteroids, have been effective in treating MIS-C but cautioned that they only work to a certain extent.

"These are children who are going to require significant observation and follow-up with multiple ultrasounds to see if this is going to resolve or if this is something they will have for the rest of their lives," Moreira said.

More than 18,000 people have tried to enter Canada from the U.S. despite travel restrictions

Most Canadians confident government will be able to get a COVID-19 vaccine: Nanos survey