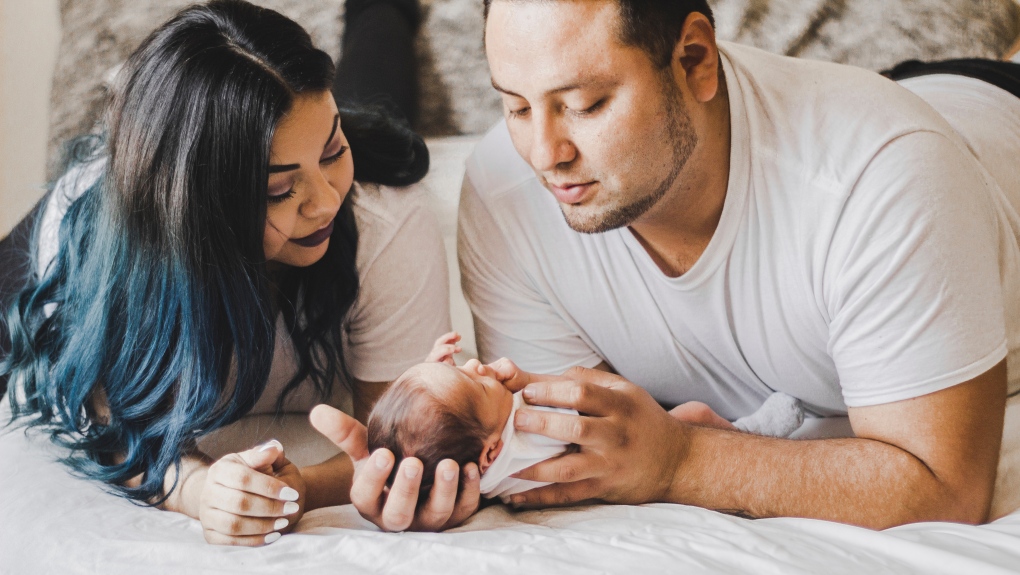 Parents admire their baby in this stock image.

OTTAWA -- New research suggests a bump in the number of fathers who planned to take time off with a new baby under a nascent national leave program could be affected by the COVID-19 pandemic.

It has been just over a year since the government started offering the use-it-or-lose-it extra weeks of paid time off work for non-birthing parents. The program was designed to mostly target fathers, who don't take paternity leave in large numbers.

It was modelled after a program adopted over a decade ago in Quebec, which has the highest paternity leave rates in the country.

A study published this month in the Journal of European Social Policy noted a five per cent rise in mothers' labour force participation rates after the Quebec policy came into effect, compared to Ontario where parents had no such policy at the time.

The authors also noted Quebec mothers were less likely to work part-time or be unemployed than they would have been absent the paternity leave policy.

The authors of the study also found the benefits were largest within the first three years of the new program being available to fathers, but fizzled out thereafter.

Sample size could have played a role, but one of the authors said another explanation was timing: The period under review overlapped with the last big recession in 2008-2009.

That raises questions about whether the impact of the Canada-wide version of the program could be shaped by an even sharper recession caused by COVID-19.

"It's a bit of a crystal ball in terms of will more fathers take it, will (fewer) fathers take it," said Andrea Doucet, an expert on parental leave policies from Brock University. She was not involved in the recently published study.

"But there's a whole part of this which is about social norms around gender and gender equality. The conversation (on paternity leave) has just changed enormously."

The federal program, which launched in March 2019, includes five to eight weeks of extra paid leave for the second parent, with the length depending on whether a family chooses standard or extended benefits. It was designed to incentivize new fathers to take some time off work to care for their children, even if their partner stays home for much longer.

The difference between the federal employment insurance program and the Quebec version lies in the income-replacement rate. Quebec's is about 70 per cent, while EI is 55 per cent, up to a limit. There are also differences in who can qualify, with individuals eligible in Quebec while EI depends on the eligibility of the mother, or first parent.

Allison Dunatchik, one of the study's authors from the University of Pennsylvania, said the size of the take-up now depends on how many parents qualify and whether they can afford the drop in income.

"There's some question about whether that's really enough incentive to get men to change their leave-taking behaviour, particularly when we're in this context of greater economic uncertainty," she said.

"There is a lot we don't know about how these policies play out in the context of a recession."

A report this month from Statistics Canada said the proportion of spouses or partners of recent mothers who claimed, or intended to claim, the EI leave increased to 35.4 per cent last year from 31.3 per cent in 2018 and 29.1 per cent in 2017.

Employment and Social Development Canada, which oversees EI, couldn't say many parents used the sharing benefit last year and so far this year.

Doucet said rates could actually go up as more fathers work remotely and take care of children at home because of school or daycare closures. Research suggests the more fathers are home, the more they want to get involved in care.

"They want to be involved. They don't just want to go to work the next day," she said.

"All that could have some benefit. There could be some implications for fathers working from home, or their take up of leave."

Doucet and two co-authors recently called on the government to boost the income-replacement rate and ease access, particularly in light of an economic downturn disproportionately affecting women.

As is, about one-third of women don't qualify for EI parental benefits, Doucet said, noting many are mothers from low-income, racialized or new immigrant families.

"Parental leave is critical to shifting those gender equality patterns, so that if we ever get into another pandemic things could be different," Doucet said.

'A great snap back': What one psychologist expects when it's OK to socialize again