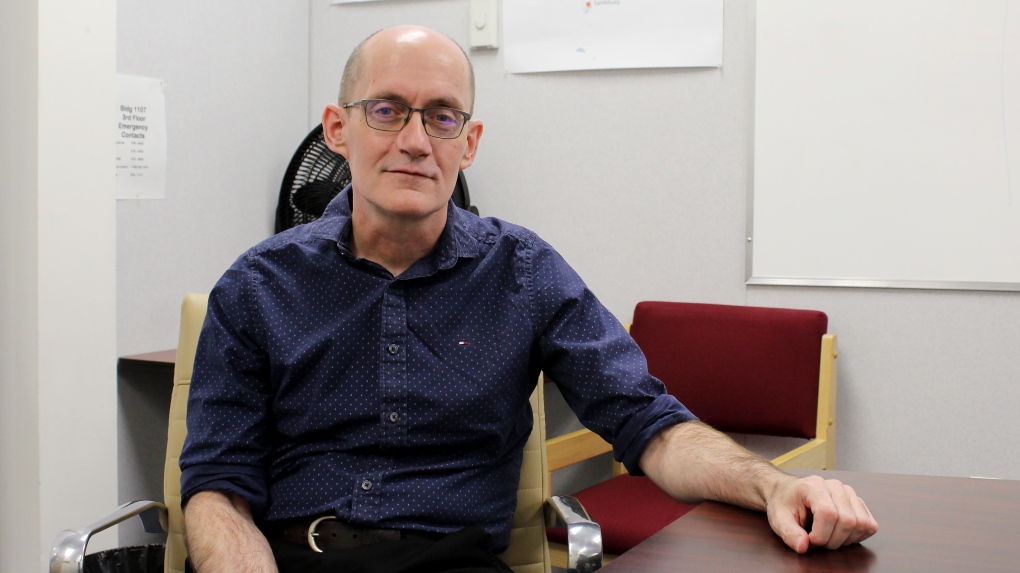 Dr. Michael Patterson, Nunavut's chief public health officer, poses for a portrait in the boardroom outside his office in Iqaluit, Nunavut, on Wednesday, Sept. 30, 2020. (THE CANADIAN PRESS/Emma Trante)

As the territory's chief public health officer, he leads the team responsible for keeping COVID-19 out of Nunavut's 25 communities.

So far, with the exception of a few cases at its mines brought in from southern workers, Nunavut has remained COVID-19 free.

Patterson, who has been in the job since December 2018, says that's partially thanks to the fact that the only way into Nunavut from the rest of the country is by plane.

Since late March, only Nunavut residents and critical workers have been allowed into the territory. And anyone who leaves Nunavut must complete a 14-day isolation stay in a designated hotel in southern Canada before returning. If they don't, they won't be allowed back into the territory.

Patterson says having mandatory isolation hotels was the hardest decision he has had to make during the pandemic.

"You can't deny that they're an invasion of freedom and they're onerous. They carry their own harms with them," he says.

"Even on the last or second last day before we made the announcement, there was still that second-guessing if this is the right decision to make ... but at that point we felt that we had no choice."

The territory does not have widespread testing capabilities, meaning it can take over a week to get results in some communities. And when flight schedules and unpredictable weather are factored in, it can take even longer, Patterson says.

"We're very dependent partly on the airlines but also on southern labs that we have very little control over. So when Alberta has an increased number of cases and are doing a lot more tests and it leads to a backlog in their tests, inevitably that's going to affect residents here."

As the face of Nunavut's COVID-19 updates, which are televised across Nunavut's three time zones, Patterson is known for his calm and collected attitude.

"Staying calm is probably the most important part of doing that work. It's just part of the job," he says.

"I think staff who work with me in other settings have had bets as to when I would say something inappropriate on camera. I think I've come close a couple of times."

Patterson grew up in Selkirk, Man. As a young man, he says his dream was to join the military. He ended up joining the reserves as a medic, where he says he first became interested in medicine.

"I wasn't a very good soldier," he laughs.

While in medical school, he worked as first-aid teacher in Naujaat, in western Nunavut.

He still works a few weekends a month in the emergency room at the Qikiqtani General Hospital in Iqaluit.

In his free time, Patterson says he likes to read. He also picks up his guitar on occasion, an instrument he's played since he was 17.

"I pick it up from time to time and I'm always incredibly rusty and get frustrated. I'm not good."

For Patterson, the pandemic has highlighted Nunavut's infrastructure gaps, from health care to housing.

Along with that lack of access to health care, Patterson says the territory's housing crisis, food insecurity and lack of access to employment and education all factor into the decisions his office is making to protect Nunavummiut from COVID-19.

"In the long run, we need to fix that. And then we may not have to take these drastic measures to reduce the risk of COVID-19 arriving. There's no doubt that the impact ... in Nunavut will be greater proportionally than many other communities in Canada," he says.

"I think at the end of this pandemic, in an ideal world, we'd take a look at the divisions that exist within Canada. Postal code, statistically, is partially a determinant of health and health outcomes. And that shouldn't be acceptable."

This report by The Canadian Press was first published Oct. 2, 2020

White House doctor: Trump 'not yet out of the woods' but 'cautiously optimistic'

Face masks do not increase CO2 levels, even in people with severe lung impairment: study