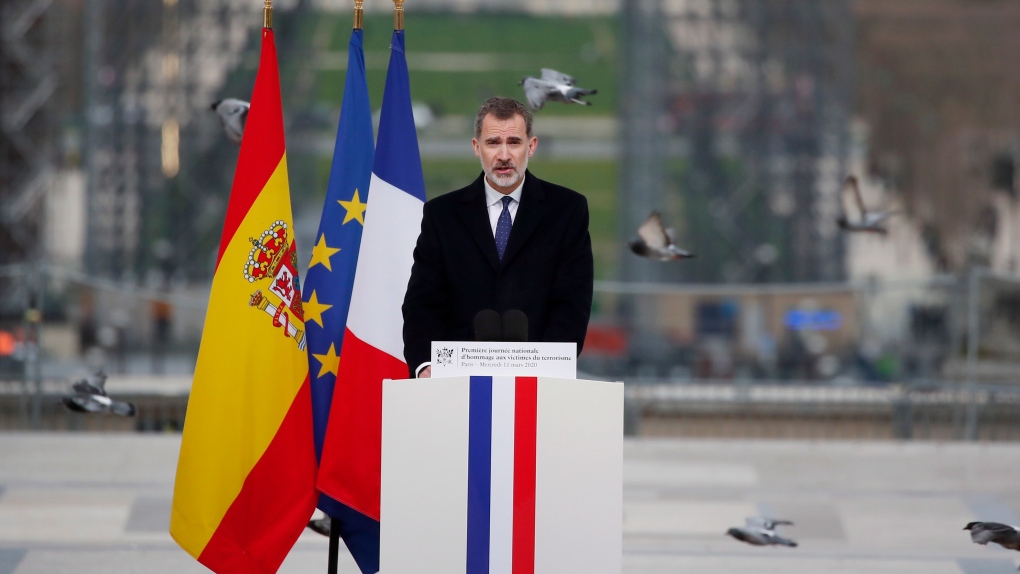 Spain's King Felipe VI delivers his speech during a ceremony to honour victims of terror attacks in Europe, on the 16th anniversary of Madrid attacks, at the Trocadero in Paris, Wednesday March 11, 2020. (AP Photo/Francois Mori)

MADRID -- The sisters of Spanish King Felipe VI acknowledged Wednesday that they got COVID-19 vaccine shots during a visit to the United Arab Emirates to see their father, the former monarch who has faced financial investigations at home.

In a statement published by leading newspaper La Vanguardia, the Infantas Elena, 57, and Cristina, 55, said they were "offered the possibility" of receiving the vaccines while in Abu Dhabi to visit their father, former monarch Juan Carlos I.

The sisters said they agreed to accept the vaccines "with the goal of obtaining a health passport" that would allow them to regularly visit their father, who left Spain in August amid investigations into alleged financial wrongdoing.

Their statement came a day after the Spanish online newspaper El Confidencial reported their vaccinations.

The two women would apparently not have been eligible yet to get COVID-19 vaccinations in Spain. Spain is still only administering vaccines to the very elderly and essential workers, before working its way down to younger age groups.

The sisters of Spain's King Felipe VI are not part of the official royal household, which has told Spanish media that the 53-year-old Felipe, Queen Letizia and their two daughters have not yet been vaccinated.