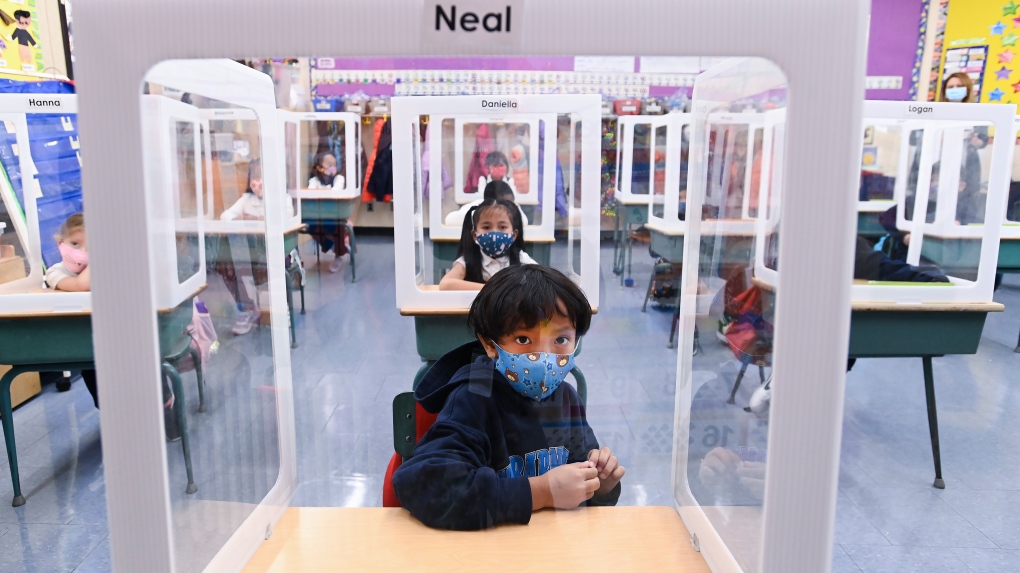 Children wearing masks sit behind screened in cubicles as they learn in their classroom after getting their pictures taken at picture day at St. Barnabas Catholic School during the COVID-19 pandemic in Scarborough, Ont., on Tuesday, October 27, 2020. THE CANADIAN PRESS/Nathan Denette

TORONTO -- A large study of pediatric patients across the U.S. suggests that young children are less susceptible to COVID-19 infections and those who do test positive show only mild symptoms.

The study revealed that four per cent of young children who tested positive for the virus showed mild symptoms when compared to their adult counterparts.

The study was conducted by researchers at the Children’s Hospital of Philadelphia and six other U.S. children’s hospitals and reviewed data from infants to 24-years-old.

Data from the PEDsnet study analysed electronic health records of 135,794 young people, approximately 5,374 of which tested positive for COVID-19. All of the tests were conducted because participants either showed symptoms or needed screening approval before a medical procedure.

Researchers also found that patients among ethnic and racialized backgrounds tend to be at a disproportionately higher risk factor to test positive for the virus and show more severe symptoms.

“Patients with Black race/ethnicity, age of less than a year or greater than 12 years, and history of public insurance were one and a half to three times more likely to develop severe disease,” according to the study.

More severe cases of the virus were reported in seven per cent of the children with positive tests and similar risk factors, while patients with a progressive long-term medical condition were nearly six times as likely to have more complications.

Research from the Canadian Pediatric Surveillance Program (CPSP) also revealed that Canadian children who test positive for the virus experience much milder symptoms than their adult counterparts.

According to the study, completed in August 1.3 per cent of children who tested positive for the disease were admitted for hospitalization.

Another recent study showed that only about half of children hospitalized with COVID-19 were admitted for another reason. For example, a COVID-19 infection was discovered during a routine screening for a previously scheduled appointment.

There has not been a single case where COVID-19 has been a cause of death among Canadian children reported to the CPSP.

Similar reports have revealed that children who are infected with COVID-19 do not have a higher chance of being hospitalized, than those who require hospitalizations for the seasonal flu.

The findings were published in September in the medical journal JAMA Network Open.