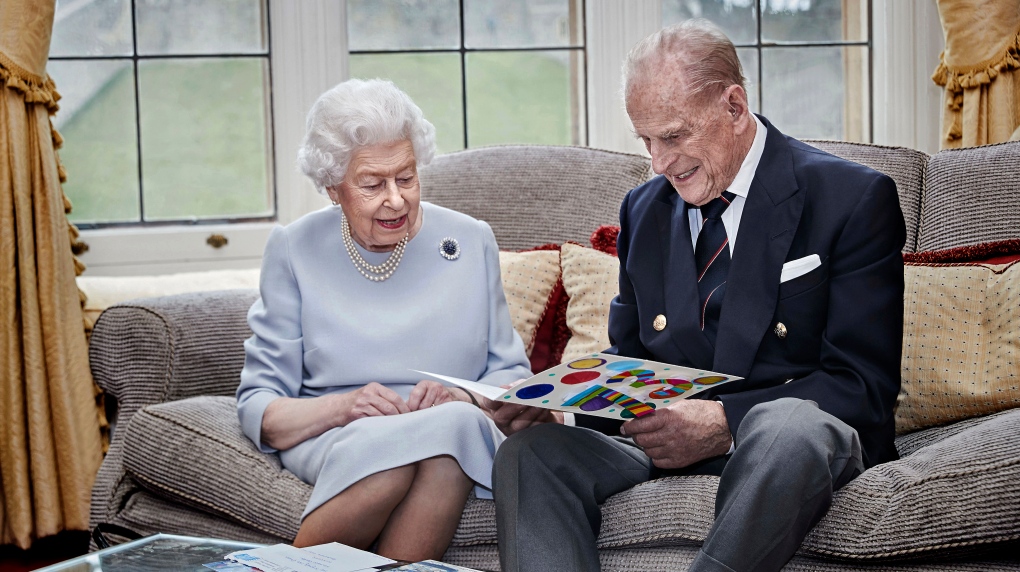 In this image released on Thursday Nov. 19, 2020, Queen Elizabeth II and Prince Philip, Duke of Edinburgh look at a homemade wedding anniversary card at Windsor Castle, England, Nov. 17, 2020, ahead of their 73rd wedding anniversary. (Chris Jackson/Pool via AP)

TORONTO -- Even Queen Elizabeth II’s Christmas plans have been upended by the COVID-19 pandemic.

On Tuesday, a spokesperson for Buckingham Palace confirmed the 94-year-old monarch and her 99-year-old husband, the Duke of Edinburgh, would not spend the holidays this year at her Sandringham Estate in Norfolk, England.

Instead, they will spend Christmas at Windsor Castle, located approximately 40 kilometres west of London, where they have lived since the beginning of England’s second national lockdown.

“Having considered all the appropriate advice, the Queen and the Duke of Edinburgh have decided this year that they will spend Christmas quietly in Windsor,” the spokesperson said in a statement to CTVNews.ca on Tuesday.

That means it will be the first time in 33 years the Queen and Prince Philip won’t be celebrating Christmas at Sandringham Estate.

Who might join them at Windsor Castle for the holiday remains unclear.

The British government has allowed families to expand their social bubbles to include three households between Dec. 23 and Dec. 27, which means the Royal Family will have to gather in much smaller numbers than they typically do.

It also means that members of the Royal Family who traditionally spend Christmas at Sandringham Estate with the Queen, such as Prince Charles and his wife, Camilla, won’t be able to see other family either, such as the Duchess of Cornwall’s own children, if they do attend the festivities.

And while it seems likely the Duke and Duchess of Cambridge will be invited to Windsor Castle for Christmas, they may not choose to join out of concern for the health of older members of the family given their children are still attending school.

The Duke and Duchess of Sussex, on the other hand, will almost certainly not gather with the Royal Family for Christmas as they live in California.

Although the Queen’s plans to gather with her family have been altered, it’s expected she will still record her annual address to the Commonwealth, which is broadcast on Christmas Day.