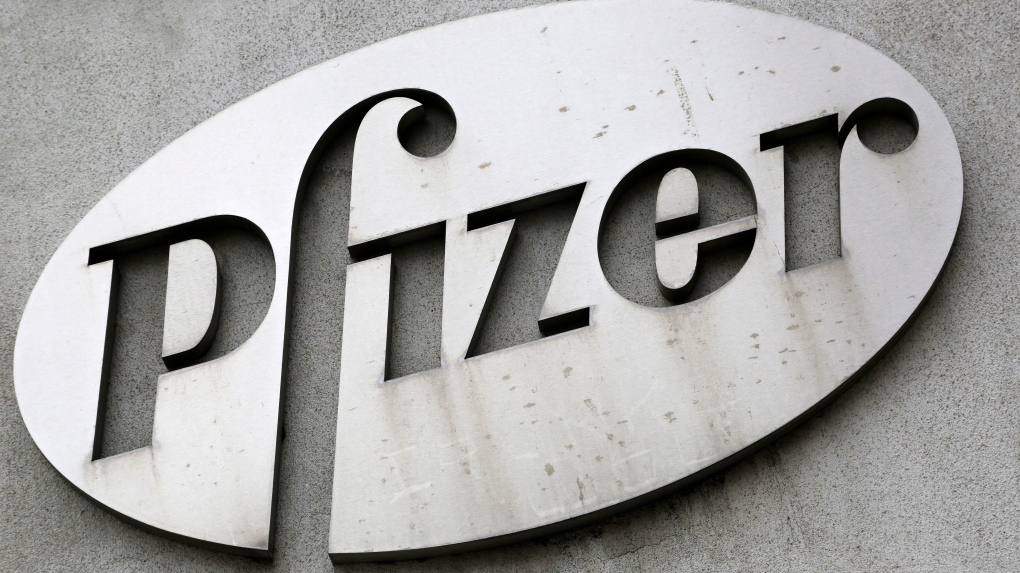 In this May 4, 2014 file photo, the Pfizer logo is displayed on the exterior of a former Pfizer factory in the Brooklyn borough of New York. (AP Photo/Mark Lennihan)

PARIS, FRANCE -- Reports that one of the vaccines for COVID-19 has shown highly promising results are a ray of hope for a world in the shadow of surging virus cases.

But does it mean the pandemic is coming to an end? Not so fast, experts say, with many questions remaining about who it will protect and for how long.

On Monday American pharmaceutical giant Pfizer and its German partner BioNTech said that their vaccine candidate has been 90 per cent effective in preventing COVID-19 infections in ongoing Phase 3 trials.

One of dozens in development, it is based on innovative technology that has never been approved for use before.

While its apparent efficacy sparked intense excitement, with only partial data so far released, we don't yet know how long it will last, whether it will protect the most vulnerable and how it could be distributed across the world.

Pfizer and BioNTech are basing their announcement on interim results from the last step in their clinical trial before making an application for approval.

They said that the vaccine was found to be "more than 90 per cent effective" in preventing participants from being infected.

This was based on 94 COVID-19 cases being found at this stage in the trial, which has enrolled 43,538 people.

But the announcement does not break down those figures to show how many infected patients were in the group that received the vaccine and how many were in the one that was given a placebo.

This points to the deeper issue that the results were distributed in a press release -- sending stock markets surging -- rather than in a detailed peer reviewed paper in a scientific journal.

"These results are extremely interesting," said French virologist Marie-Paule Kieny, who leads research at Inserm and is a former director at the World Health Organisation.

"But we need to wait to see the data, which is not yet available," she told AFP.

Other data is still being collected, notably on safety, although the firms said "no serious safety concerns" have been raised.

Another unknown is how long the vaccine's protection may last.

Effectiveness was measured seven days after patients received the final injection of the two-dose vaccine, 28 days after the initial jab.

This means we cannot yet know the duration of protection, Penny Ward, Visiting Professor in Pharmaceutical Medicine at King's College London, told the Science Media Centre.

"Longer periods of follow up are required during an ongoing outbreak to determine need for repeated booster doses."

With a view to possible authorisation by the United States Drug Agency (FDA), the two companies have indicated they will also publish results measured 14 days after the second injection.

Bruno Pitard, of France's CNRS national scientific research centre, told AFP that one of the challenges is knowing how the effectiveness of the vaccine changes over time.

"After three weeks, then a month, then two, then three, then four, we will see if the protection is still the same," he said.

WHAT DOES IT DO?

Does this vaccine stop people from catching COVID-19, or does it just reduce the severity of their symptoms? And can it prevent someone from spreading the virus?

There is no published data to tell us either way.

This is a crucial point, said Ward, because if a vaccine can protect against infections then we could theoretically ease the restrictive measures put in place to halt the virus' spread.

If, however, it mainly reduces the risk of disease but not infection, then restrictions would be needed "until sufficient numbers of individuals have been vaccinated to protect those at most risk of needing hospital care or of dying from disease from becoming very unwell by catching the infection from a vaccinated, asymptomatically infected person.”

WHO DOES IT PROTECT?

After ten months we have a better idea of who those most at risk are.

Older people, men and those who have obesity, diabetes or hypertension are among those more likely to develop serious illness.

But Pfizer and BioNTech do not reveal whether their vaccine is effective for these vulnerable groups.

"In scientific publications, we see stratification of individuals, according to their age, the presence of comorbidities (underlying medical conditions), ethnic origin, etc," said Pitard.

"Here we have none of that."

WHO CAN HAVE IT?

The vaccine developed by Pfizer and BioNTech -- along with another vaccine from U.S. firm Moderna -- involves injecting the body with strands of genetic instructions called "messenger RNA", which tell our cells how to fight the coronavirus.

One significant downside to these new messenger RNA vaccines is they must be stored at very low temperatures -- in this case -70 degrees Celsius -- although it can be kept in the fridge for up to five days.

The very low storage temperatures could pose a particular problem for poorer nations in the Global South, said Toby Peters, Professor of Cold Economy at the University of Birmingham.

"Nowhere on the planet does the logistical capacity exist to distribute vaccines at this temperature and volume without massive investment," he said, adding that "we cannot allow this to become, by default, a divided solution" between haves and have-nots.

'It's so painful': Loved ones share loss as COVID-19 deaths mount in Manitoba care facilities

Premier warns of harsher COVID-19 restrictions after data shows Ontario may get 6,500 cases per day

COVID-19 may have reversed decline in Canadian trust in scientists, survey says