TORONTO -- Since early in the COVID-19 pandemic, social media has been overrun with confusion and misinformation.

Conspiracy theorists and pseudoscientists have peddled claims that the novel coronavirus is a bioweapon, or caused by cellular networks or that injecting disinfectant was a viable treatment — none of which are true.

Among the myriad of misguided messages online, some widely shared posts claim that the virus has a lower death rate than the seasonal flu, even though influenza immunization is widely available and there’s no vaccine for COVID-19 yet.

The claim is neither clear nor true, according to experts who cite intervention measures, differences in death tallying and basic logic as reasons why comparing COVID-19 to seasonal influenza is senseless.

“You don’t have to build temporary morgues during influenza season,” said Laura Rosella, Canada Research Chair in Population Health Analytics, in a phone interview with CTVNews.ca. “In influenza season we do not see an overwhelming of the ICUs that we saw in (Italy), Brazil, Spain and France. These things just don’t add up.”

Despite an overwhelming body of evidence to disprove such social media statements, the mistruths persist, perhaps because of something called dezinformatsiya, a Russian word for “disinformation,” said David Fisman, an epidemiologist at the University of Toronto.

“I don't think this is misunderstanding or something that's correctable by confronting people with facts,” he told CTVNews.ca in an email. “It is designed to sow confusion and disrupt public health responses.”

Influenza is raised routinely in conversations about COVID-19, particularly among online groups that also spread misinformation about vaccinations. One post in particular has gained traction online in recent weeks, quoting someone named Bryan Matti as saying: “The COVID-19 death rate without a vaccine is lower than the flu death rate with a vaccine.” The quote appears to be from a May 7 tweet by Matti, a Twitter user who identifies as a Detroit-based “Make America Great Again” supporter, a “truth seeker” and a “conspiracy realist.” He does not appear to be any type of health-care professional.

The statement is not only inaccurate, but lacks clarity, said Rosella. “With a general statement like that it’s hard to know exactly what it means,” she said. “The real challenge here is the denominator.”

Is the claim based on measuring how many people die among a group of infected people? Is it measuring the death rate among the general population? Either way, it’s “comparing apples and oranges,” said University of Waterloo’s Chris Bauch, a specialist in mathematical and computer modelling of infectious disease outbreaks.

“We’ve pulled all the stops to prevent COVID,” he said. “The only reason it’s not killing more people is because we’re stopping it.”

To compare the two is not a valuable measure since lockdown efforts have likely slowed the COVID-19 infection rate dramatically and saved lives, said Rosella.

Flu seasons are not met with school closures and travel restrictions. Schools remain open, long-term care facilities aren’t shutting out visitors and airports are operating at full-tilt. There’s a vaccine, but only 42 per cent of Canadians got the flu shot in the 2018-2019 season, according to Statistics Canada.

To believe otherwise is a “perverse logic,” said Bauch, explaining its role in a so-called “prevention paradox.”

“It’s this psychology that we don’t appreciate preventive interventions, because if they’re successful the thing they prevent never comes to pass. For example, vaccines prevent infections, therefore if vaccines are successful you never see the conditions they’re intended to prevent. So in countries with high vaccine coverage, some people say ‘Why should I vaccinate? There’s no infection here,’” he said. The lockdown measures during the COVID-19 pandemic may be revealing that paradox.

Since Canada has implemented major interventions during the pandemic, the better number to use is the mortality rate among infected people, said Bauch. Those numbers show that the coronavirus is worse too.

The case fatality rate “is very clearly much higher for COVID than for influenza by a factor of 10 or so,” he said.

The case fatality rate (CFR) for the seasonal flu is typically cited at about 0.1 per cent or less. For COVID-19, the case fatality rate is estimated to be at least 1.0 per cent, but has been as high as 31.4 in the northern Italy. New research published in the Canadian Medical Association Journal estimated that the CFR for COVID-19 in Canada was 1.6 per cent near the end of April after adjusting for low reporting rates.

Comparing the number of deaths isn’t appropriate either, experts say, because the way deaths are counted for each illness differs.

Since March 9, a massive health surveillance system of testing and documentation has recorded more than 8,500 deaths COVID-19 in Canada.

Conversely, about 3,500 Canadians die from influenza every year, according to the Public Health Agency of Canada. But during flu season, health officials use data modelling to form an estimate of the number of influenza deaths. The number is often coupled with deaths from pneumonia, a common result of the flu, into a single “P&I” number. Between 2014 and 2018, pneumonia and influenza caused between 6,235 and 8,511 deaths annually, according to Statistics Canada.

But some pneumonia deaths can be attributed to other causes beyond influenza, including bacterial infection and now COVID-19, said Bauch.

“If there’s a death and the doctor notes that the cause is pneumonia, then with or without an influenza test confirmation, they’ll just say this is a pneumonia and influenza death,” he said. “If a patient never got tested for COVID and they die, they may get lumped into that category too.” 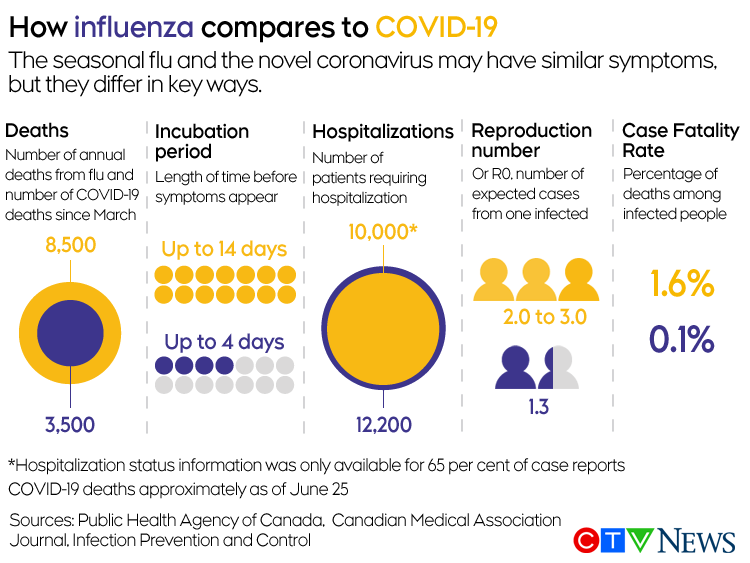 The incubation period, during which a person may be infectious but not showing symptoms, is longer for COVID-19. It can take up to 14 days for coronavirus symptoms to show, while the flu typically takes up to four days.

More people may contract COVID-19 from a single infected person than from someone with the flu. The R0 (pronounced “R naught”), or basic reproduction number, is the expected number of cases that one infected person may generate. For influenza that number is usually about 1.3 in Canada, according to Infection Prevention and Control Canada. For COVID-19 in Canada, estimates put the R0 between 2.0 and 3.0, according to IPAC. Some estimates around the world have been as high as 6.49, but the R0 varies by country (and province in Canada) and is modified by human behaviour. In other words, COVID-19 has the potential for even worse spread than most countries have already seen.

A previous version of the CTVNews.ca graphic in this story listed incorrect totals for the number of deaths from each illness.