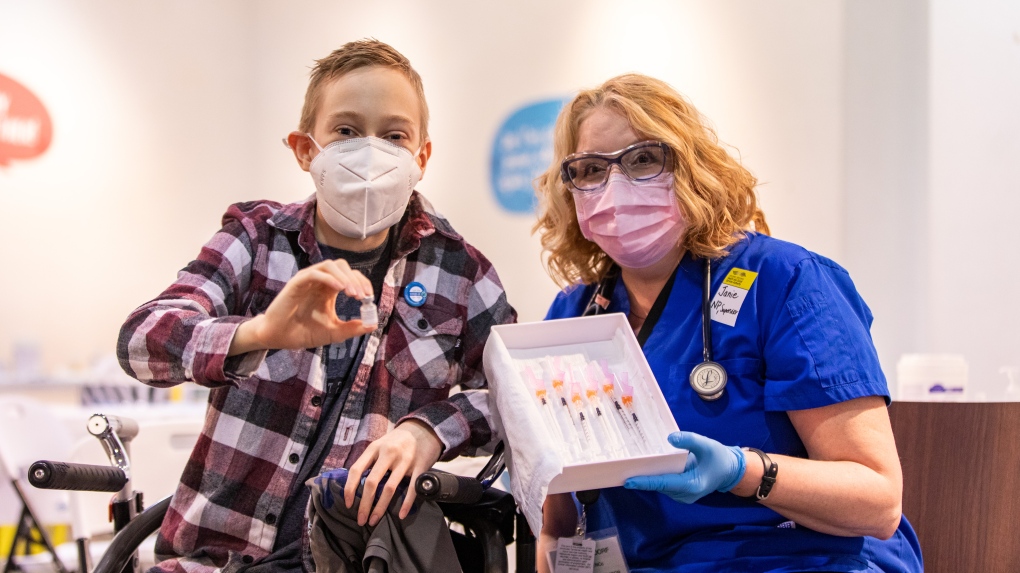 Riley Oldford, 16-years-old and who suffers from cerebral palsy, is the first N.W.T. youth to get the Pfizer vaccine poses for photos with Nurse practitioner Janie Neudorf in Yellowknife on Thursday May 6, 2021. THE CANADIAN PRESS/Bill Braden

YELLOWKNIFE -- Riley Oldford is usually out playing sledge hockey or hanging out with friends, but since the start of the pandemic he's mostly been at home.

The 16-year-old, who has cerebral palsy and a chronic lung condition, was the first person in the Northwest Territories under 18 to get vaccinated when he got the shot earlier this month.

The N.W.T. prioritized residents with chronic conditions or at high risk for COVID-19 in its vaccine rollout, but Oldford wasn't originally eligible because of his age.

On May 6, the territory started offering the Pfizer-BioNTech vaccine to youth between 12 and 17, a day after Health Canada approved its use.

Yellowknife has had relatively few cases of COVID-19 compared with other cities in Canada, but Oldford was taken out of school to reduce the risk of him getting infected.

For the past 14 months, the Grade 10 student has been learning from home.

"By now, I've almost gotten used to it," Oldford said.

Janice Bushfield, president of the Cerebral Palsy Canada Network, said others with disabilities have similar experiences to Oldford.

"Isolation has always been a problem for people with disabilities and the pandemic has magnified that," Bushfield said.

Bushfield, who lives in Alberta, said those with disabilities and their caregivers were prioritized in the province's second rollout of vaccinations. Her son, who has cerebral palsy, was recently immunized.

"The rollout has been based, it seems like, solely on age," he said.

People with underlying conditions -- including asthma, cerebral palsy, Down syndrome and heart conditions -- were prioritized for the Oxford-Astra Zeneca vaccine, but that wasn't until late March, Kron said.

Manitobans with cerebral palsy have felt increasingly isolated throughout the pandemic, he added.

"People are tired of this. It's just trying to get through every day."

Reporters, photographers and health officials watched as Oldford got his vaccine. They made the teen more nervous than the jab itself, he said.

"That was a lot more people than I've been with in the past year. I like people, but I'm not used to them anymore."

Oldford said he's taken up playing flight simulation games during the pandemic, which lets him travel virtually. He said he looks forward to the day when he can travel again to see family and friends.

"I have a computer and a joystick and I'll do little flights around Canada. It's to pass the time I guess," he said with a laugh.

Although Oldford has had his first dose, he'll still need to isolate and keep his distance until he gets his second shot.

He said all his friends plan on being vaccinated, but some are still in isolation after a recent outbreak at one of Yellowknife's schools that resulted in 64 cases and over 1,000 contacts in the city.

"It was just this feeling of hope that life could start to go back to normal, that he could go back to school. He could see his friends," she said.

She and her husband have been extra cautious throughout the pandemic. They've gone beyond public health guidelines to protect Riley, she said, including sanitizing everything that's brought in the house and changing their clothes when they get home.

"I'm definitely looking forward to the time when we can breathe a little easier and it's not what you're thinking about all day, every day," she said.

As Yellowknife continues to deal with active cases of COVID-19, Oldford hopes people follow public health orders to bring the city's case count back to zero.

This report by The Canadian Press was first published May 16, 2021.

It could be weeks before Health Canada finalizes review of J&J doses: Dr. Sharma

Science on COVID-19, VITT constantly changing: A look at how doctors keep up