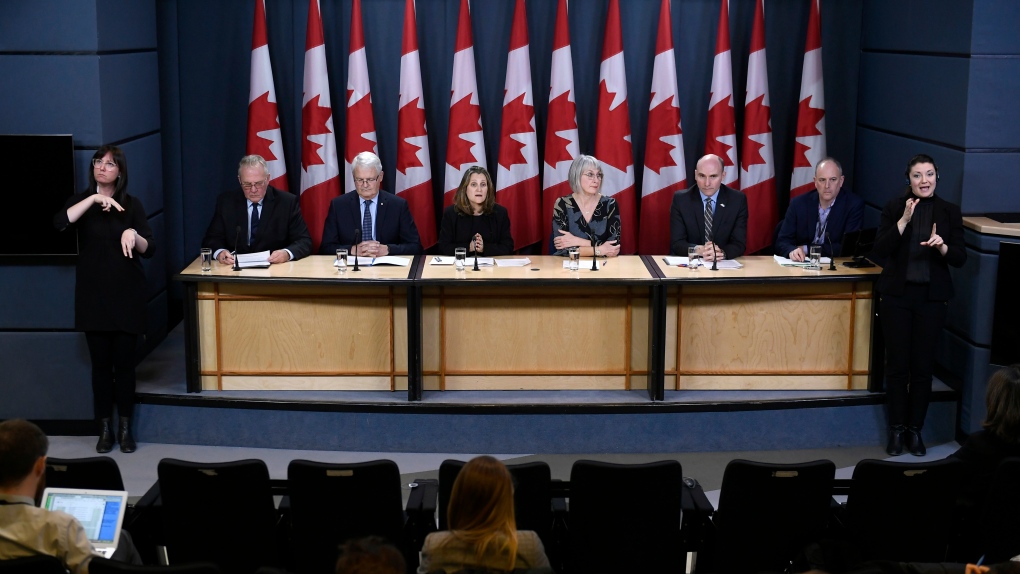 Minister of Public Safety and Emergency Preparedness Bill Blair, Minister of Transport Marc Garneau, Deputy Prime Minister Chrystia Freeland, Minister of Health Patty Hajdu and President of the Treasury Board Jean-Yves Duclos are flanked by sign language interpreters as they participate in a press conference on COVID-19 at the National Press Theatre in Ottawa, on Monday, March 16, 2020. THE CANADIAN PRESS/Justin Tang

OTTAWA -- Interpreters who have been the French or English voice of politicians and top doctors for the public during the COVID-19 pandemic say a federal department has told them that if they fall ill, they don't have benefits.

The Canadian chapter of the International Association of Conference Interpreters recently penned a letter to Public Services and Procurement Minister Anita Anand asking for her help.

Association advocate Nicole Gagnon says they were recently informed by the department that should anyone fall ill, they wouldn't be entitled to coverage because they are freelancers, not employees, and the same goes if they need to quarantine or isolate.

Public Services and Procurement Canada did not immediately respond to a request for comment.

Gagnon said the department told interpreters they were not eligible for sick pay after the Ontario-Quebec boundary was closed to non-essential travel to prevent further spread of the novel coronavirus.

She said it has been bringing in interpreters from places such as Montreal due to a shortage.

As Canada has two official languages, Parliament cannot sit without parliamentarians being provided translation services for English to French or vice versa under the Official Languages Act, she added.

Their services are also used for news conferences, such as when Prime Minister Justin Trudeau, his ministers, and top health officials provide biweekly updates on the government's handling of the pandemic.

"You would think that in the midst of controversy surrounding the issue of making sure people don't go to work sick it seems to us, as a community, that it's a bit tone-deaf on the part of government," said Gagnon.

There are 80 or so interpreters qualified to work on Parliament Hill, who have to do so in person, she said, exposing themselves to the possibility of getting the virus.

In its letter, the association adds workers have also faced increased injury from the sound quality of platforms used for virtual parliamentary meetings. And recently, it says at least 16 interpreters worked double shifts one day to staff committee proceedings.

"Here we have a government that's saying they want to help the people, but yet when it comes down to supplying their own people that they're hiring under a contract, they don't want to give them that type of benefit. I just think it's absurd."

Gagnon hopes by appealing to Anand -- who she acknowledges has her hands full leading Canada's fight to get precious COVID-19 vaccines -- the situation is remedied.

"We feel it's disrespectful, especially in light of the fact we have been reporting for duty."

This report by The Canadian Press was first published May 1, 2021.

Guidance for what Canadians can, and can't do after vaccines coming 'shortly': Hajdu

Who have provinces pegged to receive COVID-19 vaccines in the coming weeks?

India launches effort to inoculate all adults against COVID-19