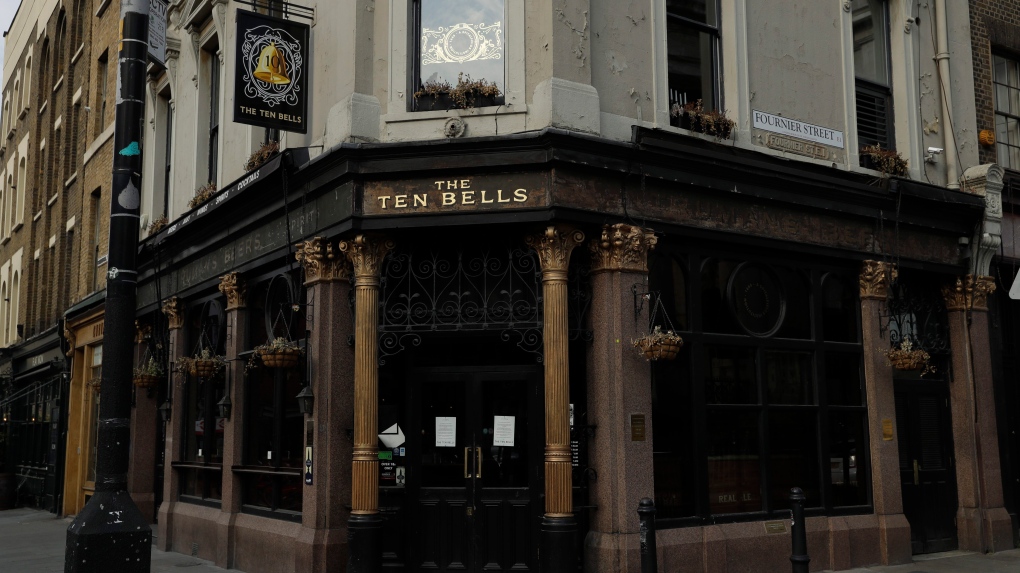 The Ten Bells pub, which is located in the east end area where the unidentified serial killer nicknamed Jack the Ripper is thought to have murdered at least five women in 1888 and where for around 12 years in the 1970s and 80s a landlord changed the pub's name to the 'The Jack the Ripper,' stands temporarily closed due to the nationwide coronavirus lockdown, on the junction of Fournier Street and Commercial Street in Spitalfields, east London, Monday, April 27, 2020. (AP Photo/Matt Dunham)

LONDON, U.K. -- Maybe this is the day to declare lockdown over.

It’s frankly hard to know where we are on this restless Friday of our national collective struggle.

This is actually good news. He means that the death rate has fallen to normal wintertime levels.

Along with that, we got some numbers today that confirm stuff we already knew. It’s always reassuring, or maybe alarming, when a trade or government agency puts it down in writing.

Online food shopping went up by 83 per cent in April. We knew that because we’ve all been online buying flour, toilet paper, and bottles of wine.

The purchase of household goods on line went up by 104 per cent. In our house, we bought a cheap parasol for the terrace, Dettol wipes, candles and paper napkins. Thousands of paper napkins. It was a mistake.

At the same time, online purchases of shoes and clothing dropped 20 per cent. Raise your sanitized hand the last person who bought a pair of jeans over the net.

I’m waiting for the post-lockdown sales.

Here’s the most distressing number: more than 30,000 pubs and restaurants in the U.K. may never reopen when the lockdown is lifted.

It all comes down to one metre.

The source on this is the British Beer and Pub Association. Those people should know.

Let’s finish today with strawberries. As in, who’s going to pick them?

Not just strawberries—fruit and vegetables of all kinds that are normally picked by workers from Eastern Europe. Not this year.

In desperation, the government is looking for 60,000 to 70,000 out-of-work British who are willing to get out there and pick.

“Pick For Britain,” as the slogan goes.

Farmers desperately need help, but they’re worried a lot of Brits will sign up, hate the work, and only last a few days. In other words, they want “pickers that stick,” as opposed to “pickers who aren’t stickers.”

Prince Charles was brought in to give the campaign a bit of royal gloss. After all, he too is a farmer.

In a video message, Charles called for a great “land army” of workers to get out there and…well…stick to it.