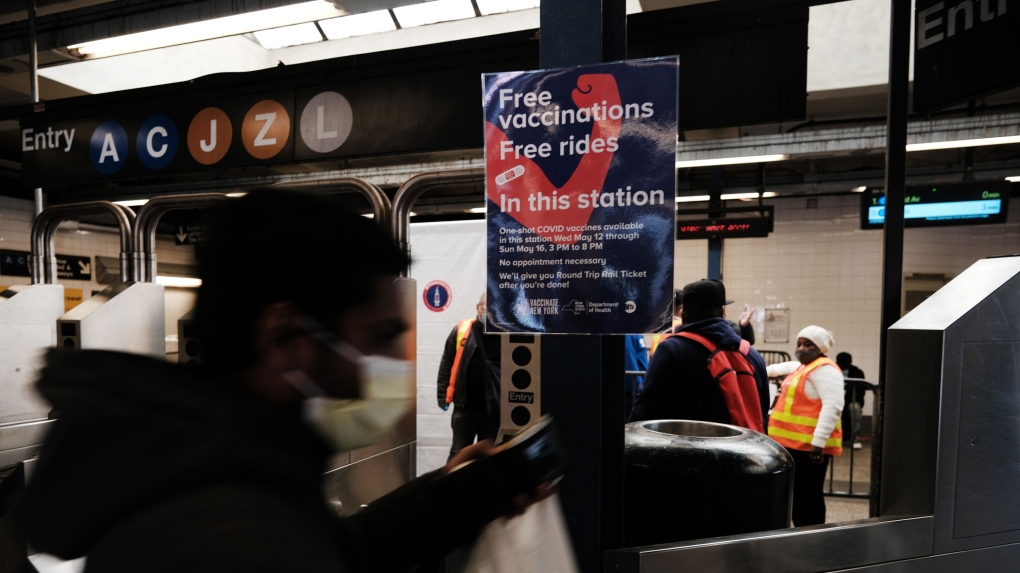 A Brooklyn subway station is one of several pop-up vacination sites in New York offering free seven-day MetroCard passes to those who get vaccinated. (Spencer Platt/Getty Images)

While Krispy Kreme is offering free doughnuts to people who are vaccinated against COVID-19, Ohio Gov. Mike DeWine is betting dollars to those donuts.

DeWine's announcement was met with both reams of praise and howls of outrage on social media. But it's just the latest and perhaps most extreme of efforts being made by governments, employers, sports teams and others to motivate more people to get vaccinated.

But will those incentives work?

In theory, yes, a survey shows. In a Kaiser Family Foundation poll, 47% of people who say they want to "wait and see" before being vaccinated said paid time off to get it would make them more likely to do so, and 39% said a financial incentive of $200 from their employer would work.

Anecdotal evidence also suggests that the incentives can be effective, depending on the type.

Jessy Patterson wasn't in any hurry to get vaccinated against COVID-19, she said. "I'm very fortunate that I don't have any underlying conditions and I'm only 36," said Patterson, an events and communications coordinator for the Parks and Recreation Department of Acworth, Georgia.

Then the city offered a $200 Walmart gift card to its employees who get vaccinated, and the offer came with a time limit -- get vaccinated by the end date or you won't get the gift card, Patterson said.

"It definitely made me get it faster than I would if I didn't drag my feet on it," Patterson said.

And for Paterson's employer, it made sense to offer that $200 gift card as an incentive to get vaccinated, city manager Brian Bulthuis said.

"If someone is vaccinated, they don't get sick. That saves us money," Bulthuis said, because they don't have to take time off work.

Many other employers apparently came to the same decision, most of them early on in the vaccination process.

Time off and cash as incentives

Some employers are offering paid time off to hourly employees who get vaccinated, including discount grocery chain Aldi (four hours), yogurt-maker Chobani (three hours for each vaccine dose) and Dollar General (four hours).

"It's simple, fair and the right thing to do," Peter McGuinness, Chobani president and COO, said on LinkedIn.

Others are offering straight-up cash. Bolthouse Farms employees get a $500 bonus if they show proof of vaccination, the Wall Street Journal reported. The company also holds vaccination clinics weekly at a company facility.

Discount grocer Lidl is offering an extra $200 in pay, and JBS Foods has offered a $100 bonus "for any US team member willing to get vaccinated."

Bulthuis estimates that about 60% of Acworth's employees are vaccinated, and "maybe about one-third probably wouldn't have" without the gift card incentive.

Health experts have said the country needs to reach at least a 70% vaccination rate, and maybe as high as 85%, to reach herd immunity, when the coronavirus spread can be drastically reduced.

As of Wednesday afternoon, 46.4% of the population had gotten at least one shot of vaccine, and 35.4% were fully vaccinated. But the vaccination rate peaked at more than 3 million doses in April. Now, enthusiasm appears to be waning, according to a Kaiser Family Foundation survey. The percentage of people who say they definitely will not be vaccinated was unchanged from an earlier survey at 13%, while the percentage of those who will only be vaccinated if required dropped from 7% to 6%.

In the Ohio plan, the winners of five future lotteries will each win $1 million if they're vaccinated, DeWine said.

To qualify for the drawings, Ohioans must be at least 18 years old. For 12-17 year-olds, separate drawings will be held, and the winner of each of those will get a full-ride scholarship, DeWine said.

"I know that some of you are now shaking your head and saying, 'That Mike DeWine, he's crazy! This million-dollar drawing idea of yours is a waste of money.' But truly, the real waste at this point in the pandemic -- when the vaccine is readily available to anyone who wants it -- the real waste is a life that is lost now to COVID-19," DeWine said.

The lottery is designed as a "regret lottery," which is more popular than the more common type, said George Loewenstein, professor of economics and psychology at Carnegie Mellon University and co-director of its Center for Behavioral Decision Research.

Participants don't decide to join, they are simply included in the drawing. If they win, but don't meet the qualification -- being vaccinated, in this case -- they often have regrets.

"These types of lotteries are immensely popular, much more popular than traditional lotteries, because people are so afraid of the regret," Loewenstein said.

"It's very clever," Loewenstein said, "both parts, the adult version and the child version."

But monetary incentives for vaccines in general can backfire, the professor said, because it sends a signal that "this is something that you might not want to do for yourself, were it not for the money that's being offered."

And in the case of West Virginia, which is offering $100 savings bonds to residents ages 16 to 35 who get vaccinated against COVID-19 "that doesn't only do damage in West Virginia," Loewenstein said. "In fact it does the most damage outside of West Virginia."

People in other states will think "It must not be in my interest to get the vaccine, and moreover, I'm not even getting $100," Loewenstein said.

And people outside West Virginia may hold out on getting vaccinated, thinking that their state will make a similar offer to West Virginia's, Loewenstein said.

Somehow, though, just little things, such as free beer, are enough to win people over, it seems.

Resurgence Brewing Company in Buffalo, New York, hosted a vaccination event last weekend, giving a free beer to the vaccinated, and more people were inoculated "than came to all the other pop-up clinics in Erie County that whole week," Ben Kestner, director of taproom operations at the brewery, told CNN.

U.S. President Joe Biden last week set a new goal for the nation: getting at least 70% of all American adults vaccinated with at least one dose by July 4.

Vaccinated Americans can avoid masks in most places: CDC

Who decides if the world needs COVID-19 booster shots?

Can't smell or taste after COVID-19? 'Olfactory training' could help

One dose of Pfizer plus one dose of AstraZeneca safe, but more mild side-effects reported: study