Not even world's top eatery is immune to coronavirus 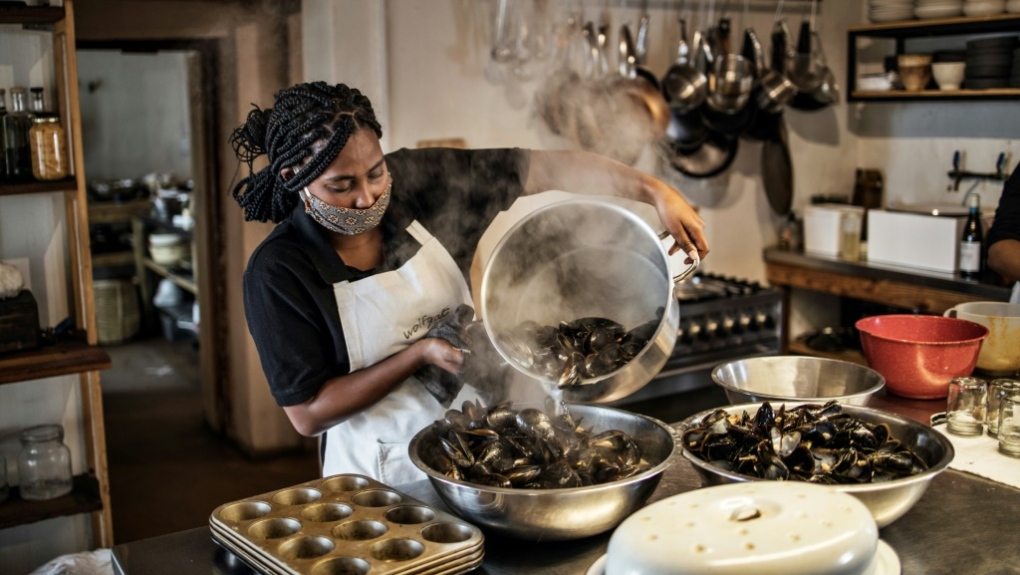 Mussel power: Wolfgat's speciality is seafood and ingredients foraged from the ocean. (AFP)

PATERNOSTER, SOUTH AFRICA -- A tiny beach restaurant in South Africa shot to fame last year when it was voted the world's best eating house for unique dishes based on the essence of the sea.

But the limelight swiftly faded after the coronavirus pandemic arrived -- and today, the much-acclaimed Wolfgat is counting its losses.

Eateries across the country have been shut to diners since March 27 when a nationwide lockdown was imposed to curb the spread of coronavirus.

"It was quite a roller-coaster ride. Everything happened very quickly and drastically," said Kobus van der Merwe, chef and owner of the Wolfgat, located in the remote beach town of Paternoster, a two-hour-drive from Cape Town.

Under normal circumstances, Wolfgat -- Afrikaans for "wolf hole" -- can serve a maximum of 20 sitting guests, specialising in dishes made from foraged ingredients such as seaweed, beach succulents and wild coastal berries.

But the pressure of the lockdown has weighed heavily on the restaurant, which barely three years after it opened won the top prize at the inaugural 2019 World Restaurant Awards in Paris.

Wolfgat won rave reviews for its small dishes, such as Saldanha bay mussels served with cauliflower and dune celery, alongside bream presented with sorghum, snoek roe and wild sage.

Foodies raved over its tasting menu served on a thatch-covered terrace overlooking the waves -- at around US$60 (52 euros) for seven courses, it cost a fraction of similar top-quality fare in Paris, London or New York.

But about half of its customers have been foreigners, and tourism in South Africa -- as around the world -- has been crippled by the pandemic.

"Even before South Africa went into lockdown, a lot of our international guests had to cancel because of the situation in their country already being much worse. It’s been way more than just the lockdown period," said van der Merwe.

In a bid to stay afloat, the sea-view Wolfgat started producing immersive boxes with assortments of snacks for delivery to customers in distant Cape Town.

But this was difficult logistically and the returns were lower, with the restaurant charging half its regular price.

"We wanted to do everything in our power to try and just survive this time with big financial losses and no future income," said van der Merwe.

"It’s a drop in the bucket but it’s at least something, and it kept us going and kept us motivated and creative," he said.

On the plus side, a lucrative season last year after being named top restaurant helped cushion the business for the shock that lay ahead.

"That gave us quite a strong sort of base," he said.

"If we had (had) a normal sort of ... okay summer season, we may not have survived this period as long as we have. It certainly gave us a bit of a stronger support base to try and pull through this."

President Cyril Ramaphosa this week announced that restaurants will soon be able to have sit-down customers, albeit with physical distance restrictions.

"We're very excited about the fact that we will be allowed to welcome guests," said van der Merwe. "But we realize it’s not going to be any kind of normal situation."