OTTAWA -- The latest national COVID-19 modelling shows that Canada could see up to 3,883 COVID-19 deaths by this time next week, but overall the public health measures Canadians are taking are working.

“In many parts of the country, the curve has flattened,” Prime Minister Justin Trudeau said on Tuesday.

While nearing the goal that the entire country has been working toward, of slowing the spread of the deadly virus, Trudeau said “we’re not out of the woods yet” with this public health emergency.

Tam provided this short-term estimate as part of the updated national projections on the severity and scope of COVID-19 in Canada that detail the current overall best- and worst-case pandemic scenarios in this country.

Overall, case spread has levelled off in several provinces, though cases in Quebec, Ontario and Alberta are driving the current epidemic growth, Tam said. Compared to other countries, Canada’s epidemic growth has been slower, with the current number of new cases doubling every 16 days.

At the time the initial projections were made, Canadian cases were doubling between every three to five days, Tam said.

The new projections on the respiratory virus’ spread and potential death toll come just over two weeks after the first round of federal modelling released by Health Canada that estimated that, under the current public health measures, up to 44,000 Canadians could die from COVID-19 in the months ahead, depending on the level of containment efforts.

“Based on the best data available, this is an updated picture of where we think we are right now, where we think things will go from here,” Trudeau said in advance of the briefing.

“How many new cases there are, how many losses we have to mourn, whether our hospitals can continue to cope, it all depends on us,” Trudeau said.

Consistent with the first round of modelling, Tuesday’s numbers indicate that depending on the containment efforts, between 4,000 and 355,000 people in Canada could die from COVID-19 over the course of the pandemic. Though, the current reality of the virus continues to have Canada closer to the lower end of that spectrum if current public health prevention measures like physical distancing are kept up. The high end of that death estimate would be if there were no prevention measures in place.

Canada continues to track within the range of between one per cent and 10 per cent of Canadians becoming infected with COVID-19, Tam said. For example, the current models show that: 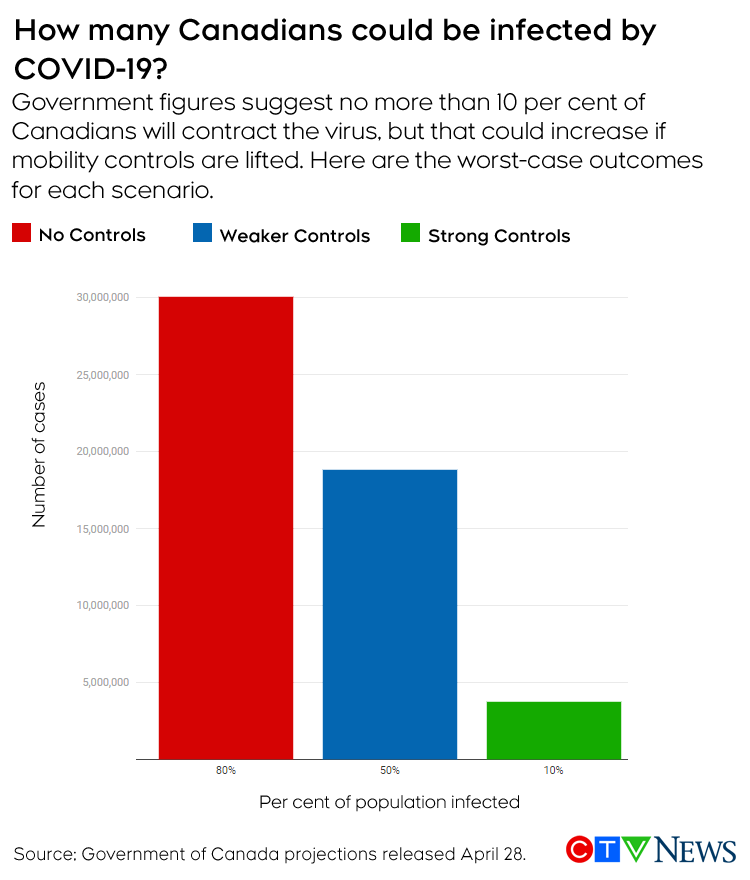 The latest modelling indicates that older Canadians and males are at a greater risk of severe outcomes from contracting COVID-19, with individuals over the age of 60 accounting for 95 per cent of deaths in this country. Nearly 80 per cent of all deaths are linked to long-term care facilities.

“We expect that only a small proportion of the population will be immune so until the population has developed a high-level of immunity to the virus, or we have a vaccine in place, we have to plan to live with a manageable level of COVID-19 activity. Therefore, we anticipate that some public health measures will need to remain in place to prevent the sparking and growth of future epidemic waves,” Tam said.

Over the last few weeks, data continues to indicate that some provinces appear to be in their peaks or potentially even coming down the other side of their curve with few to no new cases being uncovered in some regions.

Tuesday’s briefing showed that there is currently no community transmission in Prince Edward Island, the Northwest Territories, or in the Yukon, while Nunavut has yet to report a single COVID-19 case.

The modelling was also presented to all MPs who logged into the attend the first virtual meeting of the all-party special committee on COVID-19, which Trudeau also took part in, alongside the other federal party leaders.

“To date in Canada we have managed to protect our health-care systems and avoid the kinds of surges that have led to even greater loss of life in other countries. There are many factors that have contributed to our current, and I would say, cautious progress on limiting spread here in Canada,” Health Minister Patty Hajdu told the online gathering of hundreds of MPs.

“Together, all workers, all employers and all Canadians who are just adjusting to this new and difficult way of adapting are slowing the spread of COVID-19 in Canada. We are protecting our health-care systems, and we are undoubtedly saving lives together," she said.

Is it safe to send children back to school? Doctors divided on Quebec's plan

Many Quebec businesses, but not all, to reopen throughout May

'We share our hope': Canadian flag illuminated on Matterhorn in brilliant show of solidarity