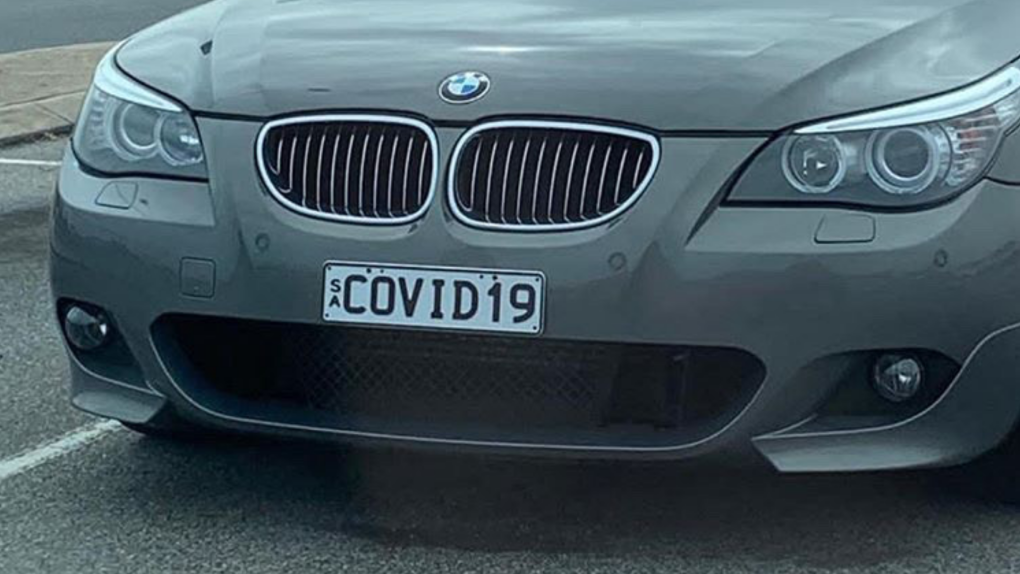 A BMW sedan with a ‘COVID19’ licence plate has been parked at an Australian airport for months, according to staff who say they don’t know who it belongs to. (Steven Spry)

TORONTO -- A luxury car with a “COVID19” licence plate has been parked at an Australian airport for months, according to staff who say they don’t know who it belongs to.

One Adelaide Airport worker said that staff believe the grey BMW has been in the employee car park since “February or even earlier.” It had been covered with a protective sheet until a windy day in April revealed its licence plate.

It was still there on Monday, after Steven Spry, an operations supervisor with Qantas, clocked out for the night, he told CTVNews.ca over Instagram messaging.

“We guess it may be a long haul pilot or hostess caught overseas,” he wrote.

The novel coronavirus wasn’t officially dubbed COVID-19 until February 11, when Spry said some colleagues believe the car might have already been parked at the airport. Since the World Health Organization deemed the global outbreaks a pandemic in March, international travel has been widely restricted and countries were forced to charter jets to bring citizens home.

Australia, which has close to 10,000 known cases of the virus and 108 deaths, according to the Johns Hopkins COVID-19 dashboard, has recently renewed lockdowns after flareups of the virus in major cities.

Amid lockdowns, the airline industry was hit particularly hard as planes were grounded and flights cancelled, leading companies to lay off thousands of staff. Spry said that most workers with Qantas and Virgin Australia Airlines are out of work, which could be part of the reason the car is still at the airport. Typically, staff can only leave their vehicles there for 48 hours.

But it’s a mystery as to when the owner of the car would have had the licence plate approved by the Registrar of Motor Vehicles, and why. The BMW in question is registered until late September, but there are no licence plates registered as “COVID19,” according to ABC Radio Adelaide, who first reported the story.

Who's hiring? A look at the Canadian job market