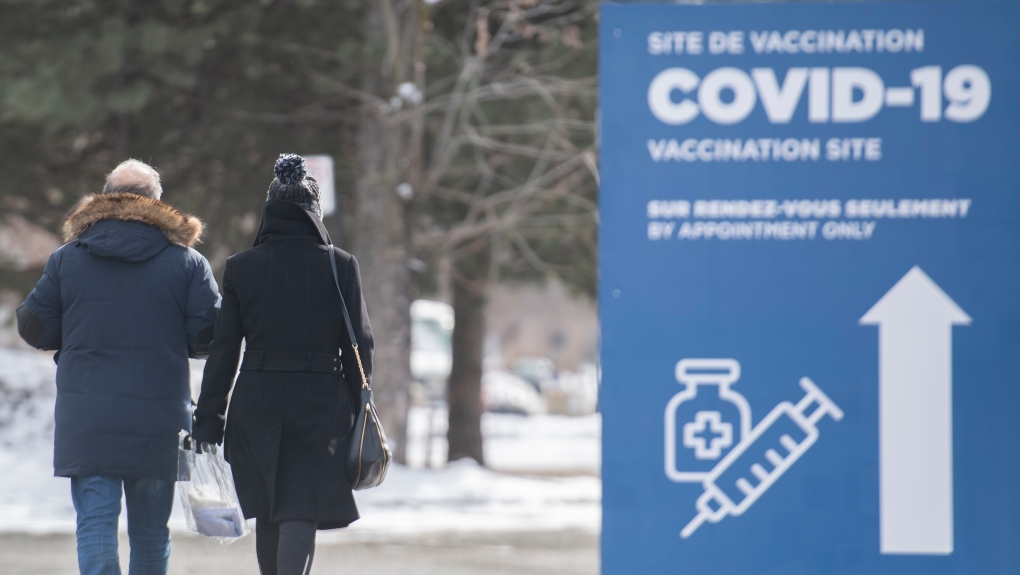 People are shown arriving at a COVID-19 vaccination site in Montreal, Sunday, March 14, 2021, as the COVID-19 pandemic continues in Canada and around the world. THE CANADIAN PRESS/Graham Hughes

Provinces continued to expand their COVID-19 vaccine rollouts on Sunday, amid what Canada's chief public health officer described as a recent increase in the number of new cases across the country.

Dr. Theresa Tam said health officials are observing a rise in new infections after several weeks of levelling off. The country reported a seven-day average of 3,052 new cases daily between March 5 and March 11.

In a statement, Tam expressed concern over an increase in cases linked to more contagious virus variants, as well as a higher infection rate in Canadians aged 20 to 39.

"Circulation of COVID-19 in younger, more mobile and socially connected adults can increase the risk of spread into high-risk populations and settings," she wrote.

Despite the rise in cases, Tam said severe outcomes such as hospitalizations and deaths continue to decline.

Her statement adds urgency to the vaccine effort, which is ramping up in several provinces as more doses arrive.

Ontario Premier Doug Ford announced the province's COVID-19 vaccine booking system is ready to start taking appointments for those 80 and older as of Monday morning, following recent pilot projects allowing some pharmacies and family doctors to deliver the Oxford-AstraZeneca vaccines to people ages 60 to 64.

Saskatchewan also expanded its rollout, announcing that anyone who is 70 or older can book an appointment for a COVID-19 vaccine as of Monday.

In Saskatchewan's Northern Administrative District, the cutoff age is 50 and over.

Quebec, which is already vaccinating people ages 70 and up across the province or 65 and up in Montreal, will expand its booking system as of Monday to add some 350 pharmacies to the list of places where people can get shots.

Health Minister Christian Dube noted that the province administered more than 30,000 doses on Saturday, and said Quebec would continue to increase the pace of vaccines.

Unlike many other provinces, Quebec has authorized using the AstraZeneca vaccine for people over 65, despite the national immunization committee warning of a lack of data on efficacy in that age group.

Dube took to his Twitter account to reassure the population that the vaccine is safe, after several European countries temporarily suspended use of AstraZeneca over concerns surrounding blood clots.

"Vaccination is the solution, regardless of which one," Dube said.

Both the World Health Organization and Health Canada's chief medical adviser have said there is no scientific explanation to suggest a link between the Oxford-AstraZeneca vaccine and blood clots.

AstraZeneca said a review of 17 million patients who received the shot in Europe and the U.K. shows no elevated risk of blood clotting.

Alberta, meanwhile, has been running out of doses of the AstraZeneca vaccine, which it has been offering to younger people.

Dr. Deena Hinshaw said both cases are travel-related and in the Calgary zone.

While Tam warned that the average number of new COVID-19 cases was rebounding slightly across the country, that wasn't the case across the board.

There was good news in Atlantic Canada, where Newfoundland and Labrador reported no new cases of COVID-19, while New Brunswick added five cases to its tally and Nova Scotia reported just one.

This report by The Canadian Press was first published March 14, 2021

'We failed the most vulnerable': Dr. Tam's biggest takeaway after a year of COVID-19

Trump should urge his followers to get vaccinated: Fauci

Head of Ont. COVID-19 vaccine task force says he is 'confident in the system' ahead of booking portal launch

A new COVID-19 side effect? Some patients are developing sudden onset diabetes