TORONTO -- Quebec, Ontario and Nova Scotia have issued nearly $13 million in COVID-related fines that have disproportionately impacted Black, Indigenous and other marginalized groups, according to a new report issued by the Canadian Civil Liberties Association and Policing the Pandemic Mapping Project.

The Policing the Pandemic Mapping Project, launched in April, tracks what it describes as “the massive and extraordinary expansions to police power” enacted in response to the pandemic.

The CCLA said vulnerable groups impacted by the pandemic need public health support and not punitive law enforcement, and that these fines are paving the way for further racial profiling and discriminatory policing of groups including people of colour, those with precarious housing, recent immigrants, youth, members of the LGBTQ community, as well as certain religious minorities.

“From the stories people sent us, primarily from Ontario, Quebec, Nova Scotia, the organizations we talked to, we know these are the communities that are both disproportionately impacted by this pandemic, and they’re also the communities that are disproportionately impacted by fines and policing,” Abby Deshman, the director of the Criminal Justice Program with the CCLA told CTV News Channel, adding that the vast majority of people are trying their best to comply with rules.

In one instance, a Black man relayed his unsettling encounter with law enforcement to the CCLA. He said he was walking in a Toronto park with his partner when they were stopped and questioned by a bylaw officer on whether they lived in the same household. He said the by-law officer and his team followed him for 25 minutes through the park, even after he and his partner decided to part ways and meet at home. Eventually, two Toronto Police Service cruisers also pulled up.

“I was afraid of what the bylaw officer’s intentions were … Fearing for my life -- I am a 6’3” Black man with short dreadlocks -- I instructed the TPS officers that for my own safety, I needed to have the conversation with them closer to where more passersby could observe,” the Toronto resident said in the report.

Later on in the encounter, he said “the TPS officer ... on numerous occasions threatened me with ‘violent arrest’ and ‘jail on criminal charges.’”

According to the account, when he returned to the park half an hour later, he saw the same officer ignore numerous groups of white people and let them go in and out of the park undisturbed.

$1,546 FINE FOR SOMEONE LIVING ON THE STREET

The report also noted that same-sex couples, for example, said they felt targeted by law enforcement because they were stopped, questioned about their relationship, and required to provide identification, while heterosexual couples walked by without being suspected of violating rules.

“It’s just not an effective or rights-respecting way to respond to what is a public health -- not public order -- crisis … What people need is information, education, support,” Deshman said.

The report estimated that 10,000 COVID-related charges were laid between April 1 and June 15, with 98 per cent of them issued in Quebec, Ontario and Nova Scotia. Quebec accounted for 77 per cent of all fines, followed by Ontario at 18 per cent, and Nova Scotia at three per cent.

Most of the fines were given over violations of provincial emergency legislation and various public health laws, specifically physical distancing and gathering requirements, the report said. Nearly three dozen alleged violations of the Criminal Code.

These fines are particularly crushing for students, seniors living on a fixed income, and many others, the report said, adding that language barriers for new immigrants and refugees also made navigating these rules challenging. 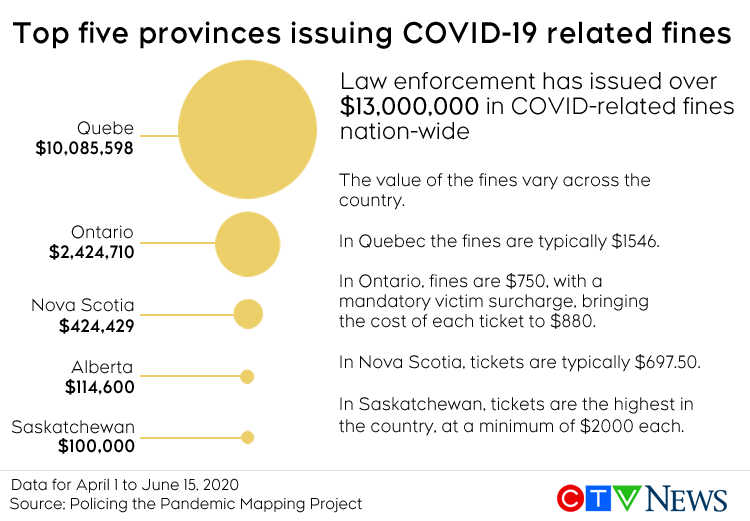 The CCLA said the focus on people’s behaviour in public spaces also disproportionately affects those who rely on those spaces, including those living in shelters or on the streets.

“When you go and approach a person who’s living on the street and hand them a $1,500 fine, as it’s been happening in Quebec, that person is even further pushed from the social support and health infrastructure they need in order to keep themselves and the community safe,” Deshman said.

Community organizations in Quebec reported to the CCLA that many of their homeless clients have received tickets for alleged physical distancing violations. The rise in police targeting reinforces the distrust that already exists between authorities and these groups, the group said, “directly undermining an effective public health response”.

“When you do a law enforcement approach, what ends up happening is you get arbitrary, sometimes unfair enforcement, and you also end up marginalizing the very at-risk communities that need the most support,” said Deshman.

After Trinity Bellwoods Park, a public park in Toronto, saw a massive influx of people gathering during one of the first nice weekends of the year, the city painted circles on the grass as a guide for physical distancing requirements. Deshman says these types of simple measures are far more effective and supportive in getting people to comply.

“We actually do not need fines in order to respond to this pandemic,” she said. She noted examples across the country, such as in B.C., where legal orders were much less restrictive and very few fines were issued. Instead of legally enforceable orders, strong public health recommendations on staying home, keeping distance, staying in a bubble helped the province successfully flatten their curve.

The Policing the Pandemic Mapping Project is co-founded by Alexander McClelland, of University of Ottawa and Alex Luscombe, of the University of Toronto.