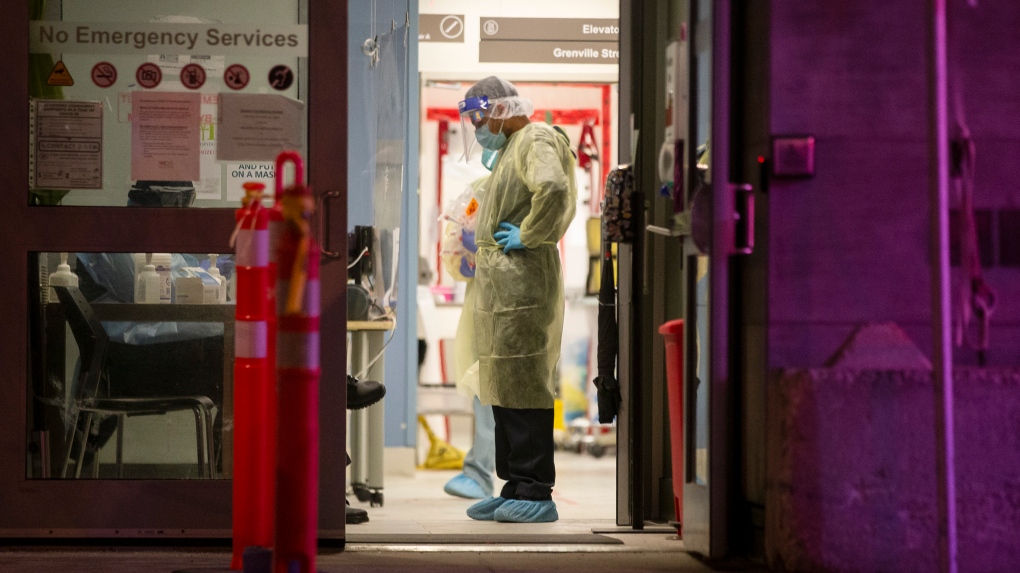 A health-care worker pauses during a lull in visitors at a COVID-19 testing centre in Toronto, Sunday, Dec. 20, 2020. THE CANADIAN PRESS/Chris Young

TORONTO -- One serious bout of COVID-19 may not be enough to keep you from getting sick a second time, a new case study suggests.

The peer-reviewed study published in ‘BMJ Case Reports’ in February looked at a 43-year-old man who had severe COVID-19 in April 2020. He required ventilation and suffered from multiple complications including kidney failure and gastrointestinal bleeding. He was hospitalized for two months before being moved to a rehabilitation centre.

After his hospitalization he had four tests for COVID-19 over the course of three months, all returned negative until August 2020. He went to the hospital with shortness of breath where he tested positive for the novel coronavirus. He was in the hospital for one day.

Two weeks later he returned to the hospital with symptoms of choking and shortness of breath and was admitted for one week. COVID-19 tests came back with yet another positive result. He told doctors that he had little outside contact and only came into direct contact with his family who had not shown any symptoms.

Researchers believe that this patient was reinfected with COVID-19, and it was not viral shedding causing a false positive result. Viral shedding is when virus particles attach themselves to various receptors in the body and are released into the surrounding environment. With COVID-19, viral shedding takes the form of sneezing, coughing, talking and even exhaling and can begin before a patient is symptomatic and continue for weeks after.

While reinfection isn’t common, cases have happened. The number is thought to be less than 100 cases of reinfection worldwide.

“As the COVID-19 pandemic has evolved, emerging reports have shown that SARS-CoV-2 reinfection is possible, such that positive SARS-CoV-2 RNA testing over a long period of time does not necessarily indicate persistent viral shedding from prior COVID-19 infection,” the authors said in a press release.

The study suggests that the milder symptoms experienced by the patient the second time around are a result of some built up immunity from his first bout of the disease months before.

The authors say that more research is needed to determine how long antibodies from a previous infection will prevent a patient from a recurring bout of COVID-19. They say previous studies have found that natural antibodies to COVID-19 begin to fade within one to two months after infection, and even faster in patients who had mild symptoms.

"The role of the presence or absence of antibodies after initial infection in survivors of a first episode of COVID-19 and its role in mitigating the risk of SARS-CoV-2 reinfection is not clearly defined. It is plausible, however, that waning immunity or absence of antibodies after the first episode of SARS CoV-2 infection may make one more susceptible to reinfection," the authors said.

One year later: Why Canada's COVID-19 crisis is being called a 'senicide'

New Iceland: Drawing parallels between the COVID-19 pandemic and smallpox

COVID-19 in Alberta: Hospitalizations fall below 250 on Saturday for first time in months

Number of Americans hesitant to get COVID-19 vaccine dropping rapidly