Is there any benefit to receiving multiple COVID-19 vaccines?

But if multiple vaccines are eventually approved in Canada, a possibility that researchers believe could happen as soon as next year, experts say there won’t be any added benefit to getting multiple different vaccines.

“They are the same sort of mechanism in terms of how they work, so I think one or the other would be beneficial,” he said.

Dr. Eleanor Fish, an immunology professor at the University of Toronto, agreed. She pointed to the Moderna and Pfizer vaccines, which both aim to induce an immune response directed at same viral target: the spike protein, which interacts with other proteins on human cells to encourage the virus to replicate.

“Both frontrunner vaccines appear to be more than 90 (per cent) effective, so equally effective,” she told CTVNews.ca on Tuesday.

Epidemiologist and health policy expert Cynthia Carr said a vaccine isn’t “like Tylenol, where you take two if you need more pain control.”

“The vaccine is teaching your immune system to respond to an invading pathogen. If the vaccine has identified the right protein molecule to target, you might need a ‘reminder’ second dose, but that is not the same as taking multiple different vaccines,” she told CTVNews.ca.

Moderna said Monday that its shots appear to be 94.5 per cent effective, according to preliminary data in an ongoing study. The announcement came one week after Pfizer said its vaccine appears to be 90 per cent effective, based on early but incomplete testing.

While Moderna seems to offer slightly more protection, at least from preliminary findings, Chakrabarti said that difference likely wouldn’t be noticeable in a real-world setting.

“Ninety-five per cent versus 90 per cent, it is a difference. But I think on the population level it’s not a big thing,” he said.

Even when multiple vaccines are approved, Fish said Canadians probably won’t be in a position to choose which one they want to take.

“I suspect that choice will not be an issue as the vaccines arrive in Canada. There will be a strategy to roll out vaccination, prioritizing the most vulnerable and front-line workers,” she said.

Unless a person has a medical condition or an allergy, there likely won’t be an option for which vaccine they’ll receive, Carr said, assuming there is a more suitable vaccine available.

Given the global population and number of doses needed, it won’t be up to individuals to decide which vaccine they’ll receive, Carr said. Instead, governments will likely make those decisions based on vaccine availability, effectiveness and how easily the doses can be distributed.

The back-to-back announcements from Pfizer and Moderna sparked optimism among scientists and prompted an immediate reaction on the stock market, with Pfizer's CEO selling US$5.6 million in stock the day it announced the news and airlines getting a boost.

Rather than bet on one company’s success, the federal government has spread around its investments in hopes of securing the first successful COVID-19 vaccine as soon as possible. However, in order to vaccinate as many Canadians as possible, it will be necessary to have a variety of effective doses available and the ability to make more.

Prime Minister Justin Trudeau commented on the strategy Tuesday, saying the plan to secure doses from a range of producers was to “give Canadians assurance that regardless of which vaccines landed first, which companies were more successful in developing an effective vaccine than others, Canadians would have access to tens of millions of doses of vaccines when they become available.”

The government has also pledged $126 million to build a facility capable of producing up to two million doses of any potential vaccine per month.

Infectious disease specialist Dr. Isaac Bogoch said people will take one vaccine initially once vaccine programs roll out. After that, he said, there are still many unanswered questions about what will happen next.

“It is currently not clear how long immunity will last after vaccination, and, if re-vaccination is required, what vaccinations people will be offered,” he told CTVNews.ca on Tuesday.

Among those unanswered questions is how the vaccines will be transported. The Pfizer vaccine needs to be stored at ultra-low temperatures of -70 C, which could make it challenging to transport, particularly to developing countries in warm climates. Moderna’s vaccine can be stored at -20 C, which the company says could be achieved through a regular freezer and eliminate storage issues. 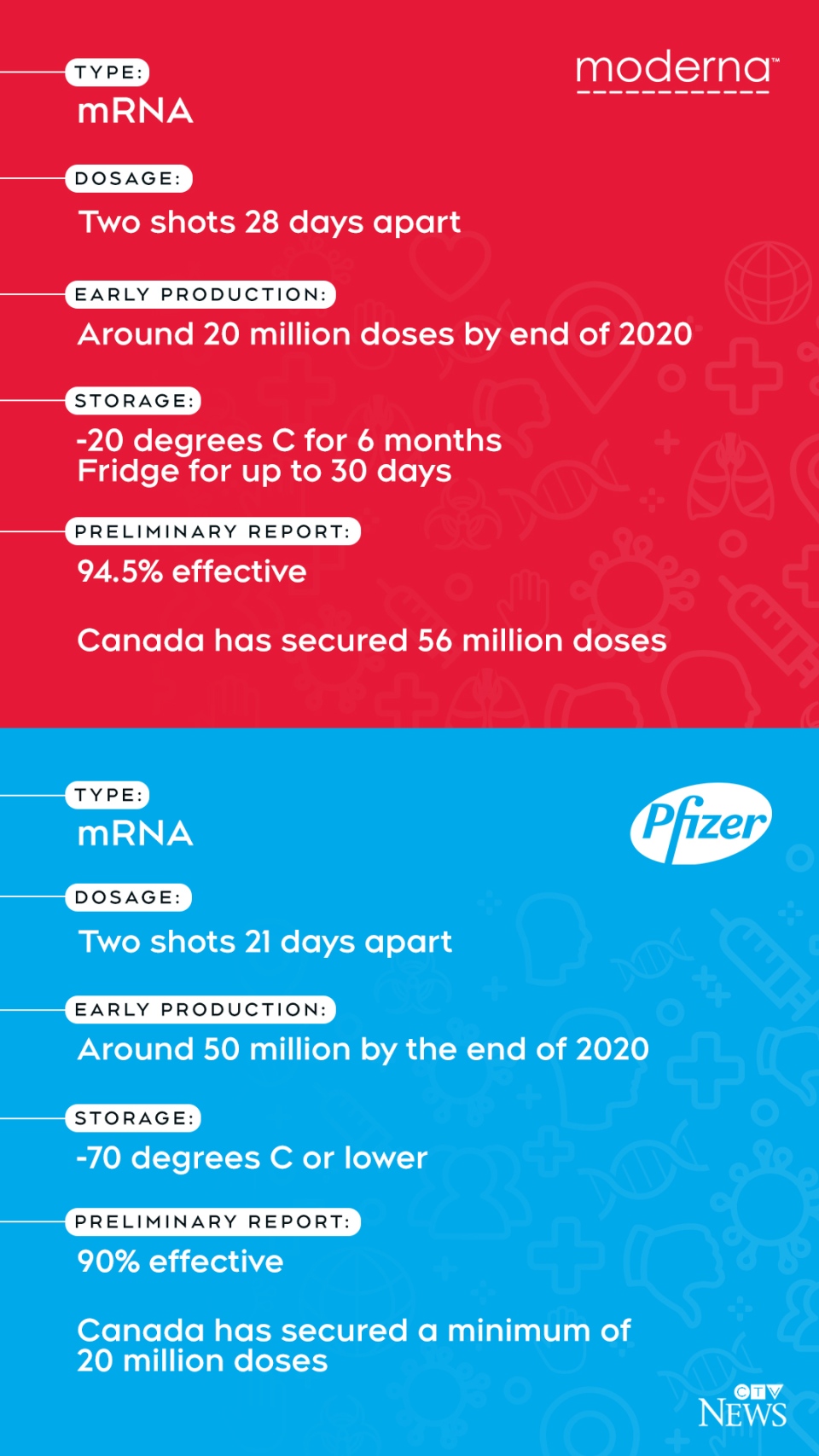 With thousands of new cases reported every day in Canada, a safe and effective vaccine has long been one of public health officials' top goals. Kelly Grindrod, an associate professor at the University of Waterloo’s school of pharmacy, said the hope is that Canada could begin administering vaccines to frontline healthcare workers in early 2021.

“The push right now is to have a broad definition of ‘front line’ to make sure we include doctors, nurses, and pharmacists, but also those in low paid healthcare positions who have high infection rates, such as personal support workers, nursing aids, and hospital cleaning staff,” she said in a statement.

“By having a broad definition of ‘healthcare worker,' the early vaccines would reach the hardest hit communities first.”

But even if Canada approves and distributes millions of vaccines, experts have long warned that a vaccine won’t immediately end the pandemic. World Health Organization spokesperson Margaret Harris pointed out that vaccines don’t eliminate diseases outright.

“We've got lots of great vaccines for other diseases, but we still have the diseases,” Harris told CTV’s Your Morning on Tuesday.

“So people need to understand it's a great tool and used widely and wisely, if it gets to all the people, that need to get it at the same time, it's going to make a difference. But we also have to do all the public health measures that do work.”

Until a vaccine or vaccines are available, health experts are advising Canadians to follow the same rules: wear a mask, practice social distancing and wash your hands often. As of Tuesday morning, more than 302,000 people in Canada have contracted COVID-19 and more than 11,000 have died.

Rapid testing identifies 70 per cent of COVID-19 positive passengers within 48 hours of arriving at airport: study

Head of WHO praises Canada's anti-COVID response; warns vaccine won't be a panacea

Is there any benefit to receiving multiple COVID-19 vaccines?

Swiss cheesed off over COVID-19 threat to fondue conviviality

Is there a path back to popularity for cruise ships?