Is the handshake back? How we're greeting each other as the world reopens

Is the handshake back? How we're greeting each other as the world reopens 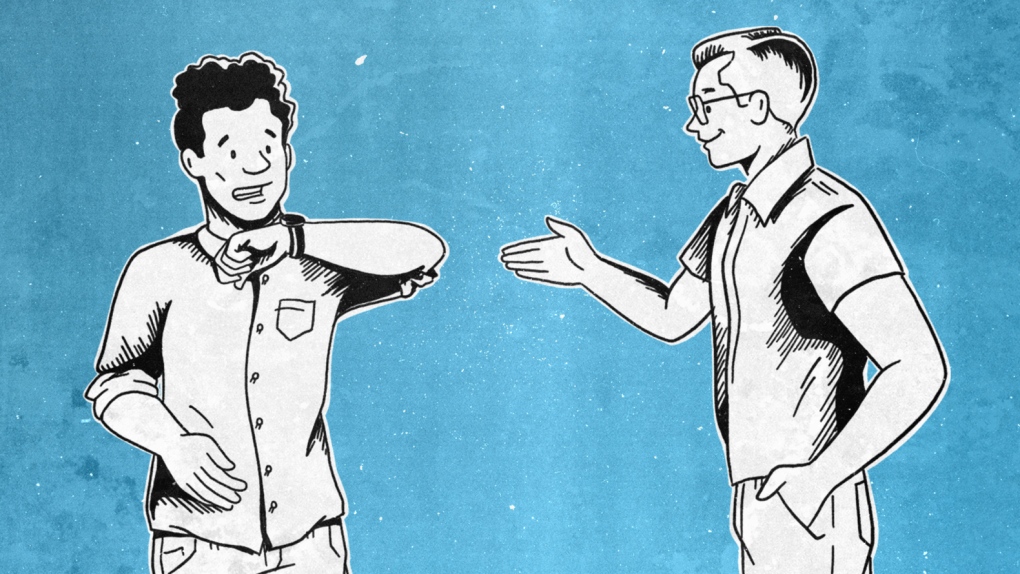 A year ago, health experts seemed to declare the handshake dead. So now that the pandemic is in retreat in some parts of the world, is it time to give the handshake another shot? (Leanza Abucayan/CNN)

This summer is bringing back a lot of what we used to call "normal," including greeting long-lost friends and maskless strangers in the U.S.

For many of us it's long overdue. But for people still anxious about socializing after more than a year in isolation, the rituals around greeting someone can be nerve-wracking.

Do you go in for a handshake? A fist bump? An awkward little wave?

A year ago, health experts seemed to declare the handshake dead. But that was back when most people knew little about the novel coronavirus and no vaccine was in sight.

So now that the pandemic is in retreat in some parts of the world, is it time to give the handshake another shot?

Like many questions that have come up over the past 15 confusing months, there is no explicitly right or wrong answer. But we've learned a lot about the virus since the world first went into lockdown, so maybe it's time to revisit the question.

Why do we shake hands in the first place?

It's not clear how exactly the practice of shaking hands began, but it has been around for thousands of years. In his epic poem "The Odyssey," written in about 800 B.C., Homer makes references to people clasping hands upon greeting each other.

One popular theory, according to History, is that extending an empty hand showed someone you came in peace and were not holding a weapon. Another explanation is that the handshake was a symbol of good faith when making a promise.

Today it's common practice to politely introduce yourself to someone with a handshake. At least it was, until the pandemic.

Now that the world is reopening, some people view shaking hands as part of a return to normalcy. But some germaphobes and other people were never fans of the custom in the first place out of concern over contracting the flu or other viruses.

"I think that shaking hands is, and in fact the human touch, is very important to our socialization," says Kyle Woods, 56, who lives in Atlanta. "I think reasonable caution is what should be practiced but respect those who are more fearful."

When the pandemic ended handshakes and kissing on the cheek last year, people around the world tried alternatives such as fist bumps or elbow bumps to greet each other.

But not everyone liked that practice.

Babs Farkasovsky from Dublin, Ohio, said she didn't have a problem with shaking hands before the pandemic, but will now opt for waving hello to strangers instead. She told CNN that while she has given fist or elbow bumps out of caution, that alternative felt silly to her.

"I really wasn't thrilled about fist bumping unless I knew the person really, really well," she says.

What the science says

While shaking hands was discouraged a year ago, there is much more data on how COVID-19 is spread. Early in the pandemic, health experts urged Americans to wipe down surfaces as researchers said the coronavirus could live on plastic and stainless steel for up to three days.

After further research, the U.S. Centers for Disease Control and Prevention now says ingesting airborne droplets is one of the main ways the virus is spread.

This is good and bad news for the handshake, one expert says.

Dr. William Schaffner, an infectious diseases expert and a professor at Vanderbilt University School of Medicine, says he would have no hesitation shaking hands with someone who is vaccinated. However, if he is meeting someone without knowing their vaccination status, he wouldn't shake their hand.

"I think the real risk from hand shaking is coming so close to another person," Schaffner says. "If you're shaking hands, you're usually really quite close to someone, at least momentarily, and you're likely to be close to that person in conversation for a period of time."

And for those who aren't comfortable extending a hand in greeting, there's always the elbow bump -- even though some people, like Woods, don't think it's a great long-term option.

"I just don't think it's good for our society or for people's psyche. I think the embrace and the handshake are important," he says. "But that's just me, and I respect those who feel differently. If someone wants to elbow bump, then I give them the cheerful elbow bump."