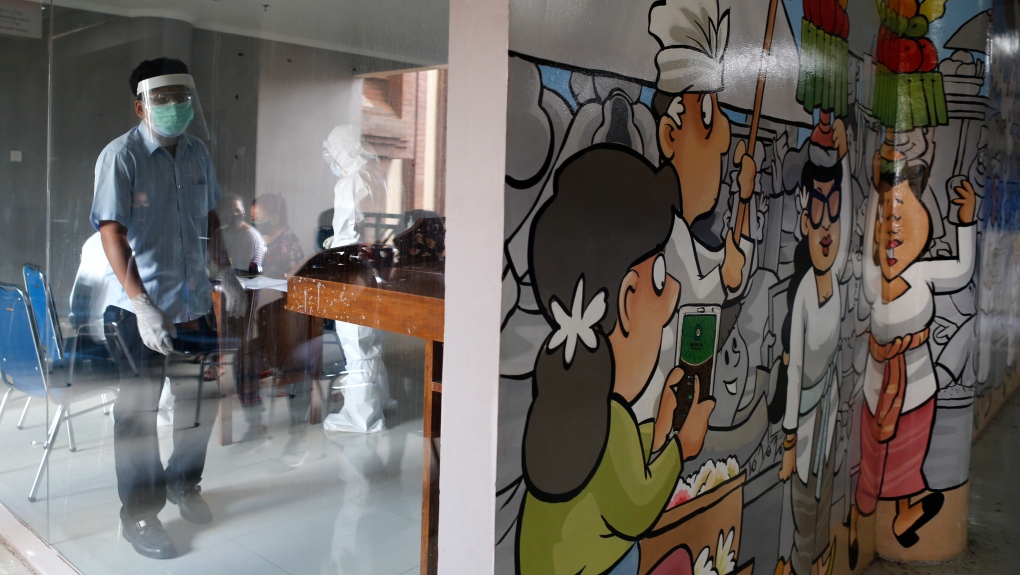 Heath workers are seen in a room during a public testing for the coronavirus conducted at a market in Bali, Indonesia on Saturday, June 6, 2020. (AP Photo/Firdia Lisnawati)

SEOUL, KOREA, REPUBLIC OF -- Indonesia reported nearly 1,000 new cases of the coronavirus on Saturday, a new single-day high for the country that brought its total caseload past 30,000, as the government unveiled an enhanced stimulus package worth US$47.6 billion to anchor the virus-battered economy.

The health ministry said there were 993 newly infected people over the past 24 hours. Indonesia has confirmed 30,514 cases, including 1,801 deaths, the most in Southeast Asia.

The package is bigger than the one worth 641.17 trillion rupiah initially allocated in late April.

"We are hoping that this stimulus can maintain our economic growth at above zero per cent," Indrawati said at a live-streamed news conference.

She said Indonesia's GDP growth could be lower than the government's prediction of 2.3% this year. In the worst-case scenario, the government expects the economy to contract 0.4%, she added.

Indonesia's economy grew just 2.9% in January-March, the slowest growth in almost two decades, as the pandemic made its effects felt in exports, investment and consumption in Southeast Asia's largest economy.

In other developments in the Asia-Pacific region:

-- ANOTHER SPIKE IN INDIA: India surpassed Italy as the sixth worst-hit by the coronavirus pandemic after another biggest single-day spike in confirmed infections. The Health Ministry reported 9,887 new cases on Saturday, bringing the total to 236,657. Most of the new cases are in rural areas following the return of hundreds of thousands of migrant workers who left cities and towns after the lockdown in late March. The lockdown is now largely being enforced in high-risk areas while authorities have partially restored train services and domestic flights and allowed shops and manufacturing to reopen. Shopping malls and religious places are due to open on Monday with restrictions to avoid large gatherings.

-- SRI LANKA TO REOPEN FOR TOURISTS: Sri Lanka says it will reopen for international tourists on Aug. 1 after a "successful containment" of the coronavirus. The Indian Ocean island nation's airports have been closed since March because of the pandemic. All precautionary measures recommended by global health and travel authorities have been put in place to welcome tourists, Sri Lanka Tourism said in a statement. Only online visa applications will be accepted and tourists must have a negative coronavirus test report obtained no more than 72 hours before landing, a confirmed travel itinerary, return air ticket, and travel insurance with health and hospitalization coverage. Sri Lanka has confirmed 1,810 virus cases, including 11 deaths.

-- BEIJING LOWERS EMERGENCY: China's capital lowered its emergency response level for the coronavirus pandemic to the second-lowest level on Saturday. The move lifts most restrictions on people travelling to Beijing from Wuhan and surrounding Hubei province, where the virus first appeared late last year. They will no longer face 14-day mandatory quarantines and other forms of monitoring, and those currently in such situations will be allowed to return to their normal lives. Beijing residential compounds will not be required to conduct temperature checks and masks no longer must be worn for outdoor activities. Kindergartens will reopen and other grades still suspended will restart classes. Beijing has reported no new cases of local transmission in at least 50 days and as many as 90 days in some districts.

-- PANGOLIN GETS TOP PROTECTION IN CHINA: China has accorded the highest level of protection to the armadillo-like pangolin as part of its crackdown on the wildlife trade following the coronavirus pandemic. Most scientists say the virus was most likely transmitted from bats to humans via an intermediary animal such as the pangolin. That has placed the focus on a wet market in Wuhan, the origin of the pandemic where wildlife was sold for food. The order from the National Forestry and Grassland Administration did not explicitly mention the outbreak as a reason for the measure. The one-sentence notice said the action was needed "in order to strengthen the protection of pangolins." The wild population of three species of pangolins found in China has crashed as a result of habitat loss and overhunting, despite a 2007 hunting ban. Pangolin meat is considered a delicacy by some Chinese and its scales are used as an ingredient in traditional Chinese medicine.

-- SOUTH KOREA REPORTS 51 NEW CASES: South Korea reported 51 new cases of the coronavirus on Saturday, mostly in the densely populated capital region, as authorities scramble to stem transmissions among low-income workers who can't afford to stay home. At least 42 of the new cases were linked to door-to-door sellers hired by Richway, a Seoul-based health product provider. Vice Health Minister Kim Gang-lip said the spread of the virus among Richway sellers was particularly alarming as most of them are in their 60s and 70s. He called for officials to strengthen their efforts to find and examine workplaces vulnerable to infections. South Korea has now confirmed 11,719 cases, including 273 deaths.