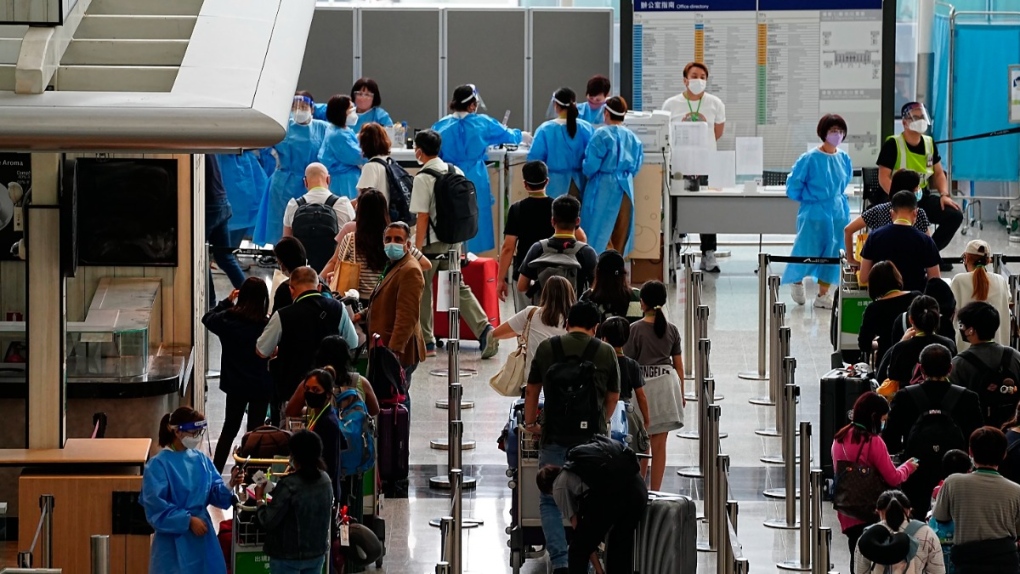 As China doubles down on COVID-19 lockdowns, restricting movement for tens of millions of people, a very different scene is unfolding in Hong Kong.

The mood in the Chinese-controlled city is perhaps the lightest it has been in three years, after authorities scrapped mandatory hotel quarantine for incoming arrivals in September -- prompting a mad rush to book flights out of the city among travel-starved residents.

It was a significant U-turn, given how stubbornly city authorities had stuck to the quarantine requirement, despite a nosediving economy, a worsening international reputation, and an ongoing exodus of residents.

Throughout the pandemic, Hong Kong adhered to a stringent "zero-COVID" approach championed by Beijing, which aims to eliminate community transmission using border controls, social distancing measures, electronic track-and-tracing, and quarantine -- which required incoming travellers to isolate in a hotel room for up to three weeks, at their own cost.

This approach buckled when Hong Kong was hit by a severe Omicron wave in early 2022, sending case numbers soaring. Numbers have remained high ever since.

But despite the ineffectiveness of zero-COVID in dealing with fast-spreading variants, authorities stood firm for another nine months, emphasizing that their priority was to reopen the border with mainland China.

So what changed -- and why has Hong Kong been able to do what mainland China hasn't?

Experts say there are a few factors at play, such as the relatively stable COVID situation and change in government leadership. But more importantly -- it's a bid to ease the dire economic crisis in both Hong Kong and the mainland, and an acknowledgment that despite Beijing's sweeping crackdown in the city, it still needs Hong Kong as a gate to the West.

Several experts emphasized that the first and most basic condition for Hong Kong's reopening was the COVID situation itself, with cases having declined to a manageable amount -- even if they hover in the thousands per day.

"Given the situation that Hong Kong is nowhere near zero daily cases, I would imagine that there's no possibility of having an open border with the mainland," said Benjamin Cowling, chair of epidemiology at the University of Hong Kong (HKU). "And in that case, the only possible choices for Hong Kong are to stay closed to everywhere, or to open at least the international border."

Hong Kong has long prided itself as "Asia's World City," a global hub attracting tourists, expatriates and international businesses. Zero-COVID has threatened all that, with planes grounded and companies beginning to look elsewhere in Asia.

"If Hong Kong remains closed to international visitors and the rest of the world is open, then Hong Kong will quickly lose its international financial status," said Vera Yuen, a lecturer of economics at HKU.

"You have to have enough firms, enough talent, resources that come together ... It's getting close to the tipping point where we can lose all this."

Since the start of the pandemic, waves of residents -- both expatriates and Hong Kong citizens -- have left the city. Around 113,200 residents left Hong Kong over the past year, compared to 89,200 the year before, according to the Census and Statistics Department in August.

September brought more bad news, when the city's financial secretary revealed the city could face a budget deficit of over than 100 billion Hong Kong dollars (about US$12.7 billion) -- which would be the second-highest fiscal deficit ever recorded.

A spate of upcoming high-profile international events added to the growing pressure: the Hong Kong Sevens rugby tournament and the Global Financial Leaders' Forum, which invites executives from the world's biggest financial institutions such as Goldman Sachs and Morgan Stanley for a two-day summit.

According to media reports in August, some banks warned their executives would only attend if there was quarantine-free travel -- a widely-speculated factor behind the government's ultimate decision.

It would mark "a beautiful victory (to have) all the big heads, the superstars from banks, hedge funds, etc. to come to our summit," said Yuen. "They're signalling to the world that we're not going to stay like this -- we're going back to the competition, don't forget us, we ar still a shiny international financial centre."

MIDDLEMAN TO THE WEST

This insistence upon rejoining the international community may appear jarring coming after efforts by Beijing to bring Hong Kong further under its control.

Since 2020, the Hong Kong and central governments have all but wiped out the city's opposition. Pro-democracy activists have been jailed or exiled, and independent newsrooms shut down; meanwhile, authorities have changed school curricula to emphasize Chinese history and culture, and pushed greater economic co-operation in the Greater Bay Area, a national scheme to link Guangdong province closer with Hong Kong and Macau.

But to Beijing, some experts say, it isn't contradictory at all to push Hong Kong as a global hub while integrating it further with the mainland.

"They want both -- they don't think it's mutually exclusive," said Yuen.

As a former British colony that was allowed to retain capitalist freedoms after being handed back to China, Hong Kong has long drawn international businesses hoping to gain access to the Chinese market.

Even other Chinese financial centres like Shanghai or Shenzhen have controls over capital flow and information censorship -- meaning "China still needs Hong Kong" to bring in foreign investment and capital, said Yuen.

Beijing's hope, she said, is that if Hong Kong can become more deeply integrated with China and the Greater Bay Area, its success in the global market can also boost the mainland economy.

And China needs all the help it can get right now, with the housing market collapsing, companies struggling with recurring supply chain headaches, and youth unemployment at a record high. Beijing's zero-COVID policy is making things worse, with near-constant disruptions as different parts of the country go in and out of lockdown like a virus-driven whack-a-mole.

Chinese authorities "see a role for Hong Kong in helping to restore the mainland economy," said John Burns, Emeritus Professor at HKU. "This would be another reason why the central government gave the green light to Hong Kong authorities to open the border -- and I think that's what happened. Hong Kong has no autonomy to decide things like this on its own."

He added that the U-turn reflects a change in perspective from both Hong Kong and Chinese authorities, and an adaptability to the shifting situation.

"Previously they have prioritized the mainland border ... (now), they are saying, okay, well, here is a case where China is opening up one port. Let's see what happens. It's an experiment," he said.

But every experiment runs its risks. By waiting so long to reopen, and by cracking down so hard on Hong Kong, authorities have also created a new sense of wariness among international observers, experts say.

"The West may not treat Hong Kong as different from China anymore," said Yuen. "Some of the technologies which were recently banned for import to China are now also banned in Hong Kong because they know that if you ship it to Hong Kong, they will be transferred to China. That is one potential barrier or problem that we have -- is how much trust the West will still have in Hong Kong."

Prime Minister Justin Trudeau says he is listening to concerns that some of the firearms his government is looking to ban are in fact used more for hunting.