From closures to near-normal routines, students look back on COVID-warped school year 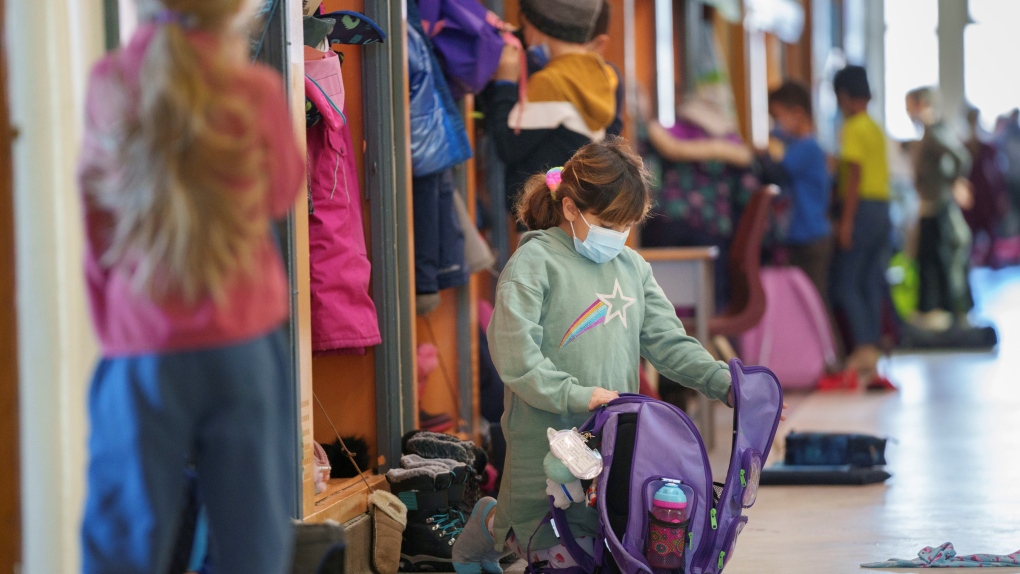 Students in an elementary school get ready for class as Quebec students get back to school in Montreal on Tuesday, January 18, 2022. THE CANADIAN PRESS/Paul Chiasson

The final bell is about to ring at the end of a topsy-turvy school year warped by the COVID-19 crisis.

Many Canadian students cautiously returned to class this fall under strict pandemic protocols, such as mandatory masking and social distancing.

As younger kids became eligible for vaccination late last year, it seemed like schools were settling into new routines. That was soon upended by the rampant spread of the Omicron variant, which saw some provinces extend winter breaks or switch to remote learning.

Following the winter surge, public health measures were eased, allowing students to ditch their masks and gather together for school events.

The Canadian Press periodically checked in with students throughout these twists and turns. Here are their reflections on a pandemic-altered school year.

ALL THE TIMES WE SPENT TOGETHER

After finishing her final day of high school, Maitri Shah said she and her friends stood in a circle talking and crying, reluctant to say goodbye for what could be the last time.

"It was this feeling of finality," Shah said. "All the sadness hit, because we're never going to see each other again."

Still, the Calgary student said she's glad she got to say a proper goodbye to Grade 12, because that wasn't always guaranteed.

When Alberta extended the winter break to curb the spread of Omicron, there was a lot of "yes, no, yes, no" about whether graduation festivities would go forward, said Shah.

But as the fifth COVID-19 wave ebbed, Shah said she and her classmates made the most of the remaining time they had together.

"We had this high, almost, because a lot of restrictions were lifted," said Shah, 18. "We're trying to catch up on all of the social aspects of the years, and then also all of the academics."

In their last semester, Shah and her classmates checked off all the rituals they got to do that the two previous graduating classes had been deprived of: dancing at prom, walking on stage to accept their diploma, throwing their caps in the air.

As she prepares to move to Boston to attend Harvard University in the fall, Shah said she's grateful that she gets to take those memories with her.

"It felt amazing to actually be able to celebrate all of those years of schooling ... with your teachers, your friends and family," said Shah. "I don't think that's something that can be replaced with virtual activities."

Ari Blake stayed home from school last week because he was sick with COVID-19, the contagion that has shaped more than a third of his grade school education.

The 11-year-old student has been toggling between in-person and remote learning since Grade 4, and he expected that the COVID-19 shuffle would continue through the end of Grade 6.

But as his Toronto school relaxed COVID-19 rules, Ari said he had to adjust to another kind of classroom shift -- returning to pre-pandemic routines.

"It completely switched on me," he said. "Just all of a sudden, everything kind of stopped."

A lot has changed since the start of the school year, when students weren't allowed to spend recess with kids outside of their class cohort, Ari said.

When the mask mandate dropped, Ari said it was initially a little strange to see many of his classmates' full faces. But after about a week, he got used to it. And eventually, he stopped wearing his mask, too.

"I completely forgot that COVID was existing a few days ago," said Ari. That is, until he tested positive for the virus last week. Four days in, Ari said he felt fine other than a sore throat and a bit of fatigue.

Ari said he's gearing up for some summer fun at sleepover camp. But come fall, Ari said he's bracing for a heavy workload in Grade 7 as his class catches up on all the lessons they've missed because of COVID-19 disruptions.

"I'd say we haven't been learning as much as in normal years," he said. "But I can't really remember normal years. It's so long ago. This is what I think is normal."

Ask 11-year-old Tecumseh Hotomani to compare this school year to the previous one and you'll get a definitive answer.

"This year was way better," he said.

As Grade 5 progressed, he saw his classroom gradually shift back to pre-COVID norms after the Manitoba government allowed students to shed their masks and buddy up once again in March.

The move was an A+ in his books. He found the mandatory face coverings uncomfortable and said they made it harder for people to hear and understand him.

"I felt amazing because I could breathe," he recalled.

That wasn't the only thing that changed. The social butterfly was able to resume playdates, and his Winnipeg elementary school started taking him on field trips again, including to a board game cafe.

His mother, Grace Redhead, said it's been a joy to see her son return to his social and active self after two years of limited interactions.

"It just feels like he's experiencing things again for the first time," she said.

The last day of school will include bowling and a picnic lunch, a celebration Redhead had been hoping for.

"I'm so thankful that this year we get to have that for the students," she said.

This report by The Canadian Press was first published June 26, 2022.

From closures to near-normal routines, students look back on COVID-warped school year

Women have a higher chance of developing long COVID than men, study finds

Long COVID can affect children of all ages, including infants, study shows