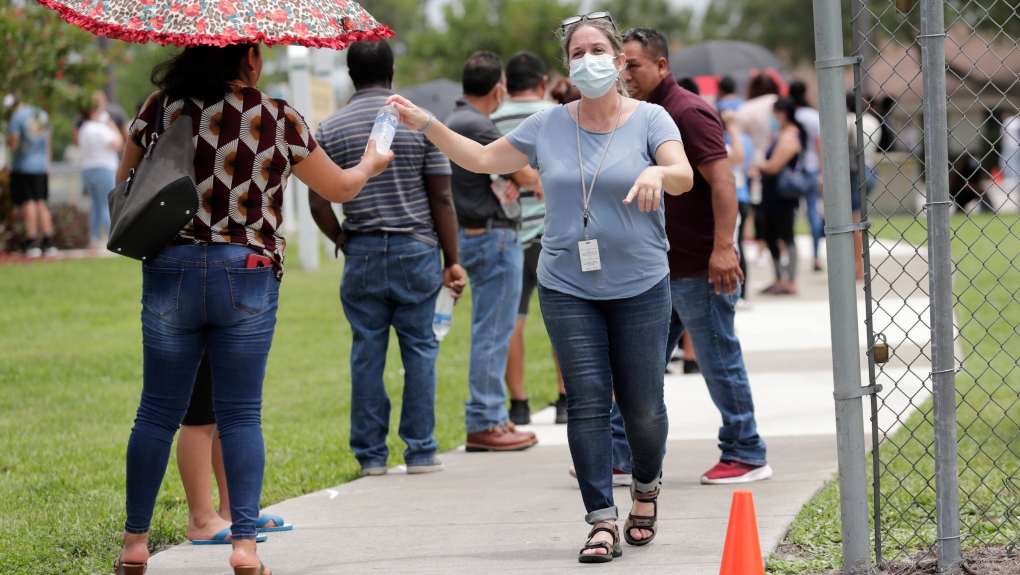 In this Sunday, June 7, 2020, photo, Gretel Cacerces, right, passes out bottled water to those standing in line for COVID-19 testing at the Florida Department of Health in Collier County amid the new coronavirus pandemic in Immokalee, Fla. (AP Photo/Lynne Sladky)

"There is failed leadership in the governor's office," State Senate Minority Leader Audrey Gibson said during an online news conference shortly after health officials reported 10,181 new confirmed cases. The new report brings the total number of confirmed cases to 301,810 since the outbreak began in the state March 1.

The state recorded 112 deaths Wednesday, the third time in the past seven days it has reported more than 100 -- a mark that had only been topped once before last week. The state has now recorded 4,626 COVID-19 deaths.

Florida's rolling seven-day average for deaths is now 92 a day, triple the 31 posted a month ago, just before the toll began creeping up and then exploding last week. Hospitals reported Wednesday morning that they are treating 8,276 coronavirus patients, a jump of 84 from Tuesday. As of Tuesday, Florida had the No. 2 death rate in country, slightly behind Texas, which has 25% more residents.

"We have had people from the Florida Health Care Association say we have been able to save probably thousands of lives," he said. "It is something we take very, very seriously. We are doing all we can because every life counts. It doesn't matter whether you are 10 years old, 30 years old or 90 years old."

DeSantis announced Wednesday that labs working with the state's numerous testing sites that can return results in two days will be getting more business, while those that have been returning results in a week or 10 days are going to be dismissed.

DeSantis again defended his decision not to issue a statewide order requiring masks in public places. He said that should be left to local officials because some larger counties are more hard hit than more rural, less-populated counties, which have few cases. Several counties and cities now require masks.

During a state school board meeting earlier Wednesday, DeSantis reiterated his education commissioner's decision to reopen Florida's schools next month, saying children are highly unlikely to become seriously ill from coronavirus and do not frequently pass the virus to others.

He did say precautions need to be taken to protect teachers and other adult staff, and that online classes need to remain available for children whose parents want them to stay home. Florida's schools closed in mid-March.

"It would be foolish not to listen to the parents," the governor said.

The Democrats called on DeSantis to not push for schools to reopen.

"We cannot even control an outbreak of lice in our schools, so how are we going to control not spreading this virus?" Sen. Janet Cruz asked.

Meanwhile, some hospitals say they are running out of beds, particularly in South Florida. Dr. Nicholas Namias, chief of trauma and surgical care at Jackson Memorial Hospital in Miami, one of the state's largest, said converting regular rooms into COVID-19 rooms requires them to have negative airflow to prevent the virus's spread. Barring that, hospitals at least need to have the capability to isolate patients.

"We're getting to the point where it's going to be full," Namias said. "We have gridlock and we won't be able to take patients and they'll just be stacked in the ERs."

All parks are capping attendance, requiring reservations and checking the temperatures of all employees and guests. Masks are being required.

In Broward County, former sheriff Scott Israel, who is running to get his job back, announced Wednesday that he has been hospitalized with the coronavirus. DeSantis removed Israel from office in January 2019, saying his actions and decisions failed to keep Marjory Stoneman Douglas High School students safe before and during a February 2018 mass shooting that left 17 people dead.

Israel, 64, said he is optimistic about recovering from the virus. He is running against DeSantis' hand-picked successor, Sheriff Gregory Tony.