Rising rates of COVID-19 in the remote Ontario community of Kashechewan is highlighting just how hard the virus has hit First Nations.

“It’s not surprising that more people in First Nations communities are affected by COVID-19,” Lynne Innes, Weeneebayko Area Health Authority’s president and CEO, told CTVNews.ca. “I’ve worked in many remote First Nations and I’ve seen the issues and the struggle with the lack of infrastructure, overcrowded housing, and water issues.”

A report released Thursday shows that since the start of the pandemic, there have been more than 31,300 COVID-19 cases on First Nations reserves and over 1,400 hospitalizations. There are also currently 868 active COVID-19 cases in these communities, with the proportion of cases in Kashechewan taking up approximately 25 per cent of all active cases on First Nations reserves.

“That community was hit hard with COVID-19,” said Innes. “In our region [northern Ontario], the majority of the cases -- I say at least 80 per cent of our cases -- are children between the ages of 12 to 17.”

HOW DOES EACH REGION COMPARE?

Alberta reported the most cumulative cases so far, with a total of nearly 8,800 cases and followed closely by Manitoba. Although Ontario has cumulated a total of just over 2,600 cases, there were 56 positive COVID-19 cases reported this week in First Nations communities in the province and 212 cases last week.

Federal Indigenous Services Minister Marc Miller said that these communities were highly impacted during the second wave, and though cases are starting to slow down, it’s important to stay vigilant.

“Knowing what the science was pointing to, generally speaking, Indigenous peoples [are] 3.5- to five-times more susceptible to getting COVID-19 and then suffering worse effects of that,” Miller told CTVNews.ca. “There is a pretty bright light at the end of the tunnel, but we're not out of the woods yet.”

Throughout the pandemic, individuals in First Nations communities between the ages of 20 and 39 years of age reported the highest number of COVID-19 cases, accounting for more than 30 per cent of cases. Positive COVID-19 cases were particularly seen in females in this age category. 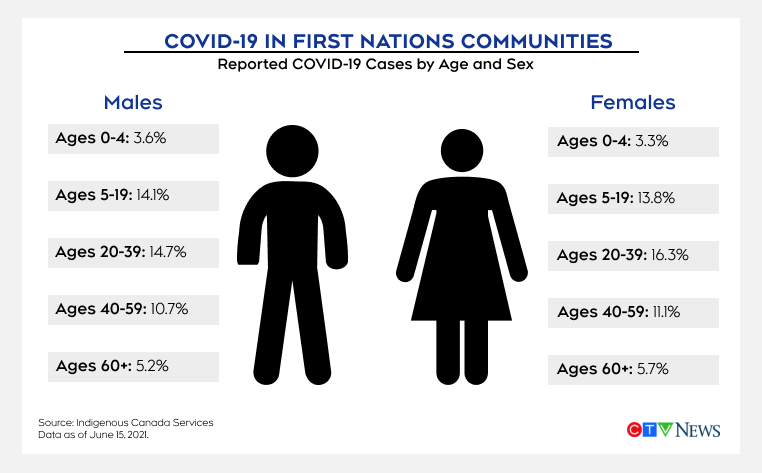 Breakdown of COVID-19 cases by age and sex in First Nations communities.

Currently, 687 First Nations communities are receiving vaccinations. As of Friday, nearly 589,000 doses have been administered, with 39 per cent of shots administered being a second dose.

Miller said that more than 80 per cent of adults have now been vaccinated with a single dose, and approximately 72-73 per cent for individuals 12 years of age and older. But, there’s still concern for the younger population who have been contracting the virus and are unable to get the vaccine.

“We’ve worked with Chief Leo Friday and his community to get isolation tents and medical tents, and the Armed Forces where the Rangers have been activated since June,” he said. “We will stop at nothing to help them.”

As vaccinations continue in First Nations communities, more than 40 per cent of individuals have been vaccinated with two doses. With the support from the Rangers and the continued vaccination efforts, Miller said that he hopes to have all who are willing to get their shot fully vaccinated by the fall and to curb the spread of the virus in First Nations reserves.