OTTAWA -- Canada is reviewing its vaccine booster strategy, adding new countries to the list of nations subjected to federal travel restrictions, and is imposing new testing requirements on all air travellers coming from outside of Canada with the exception of the U.S., due to concerns over the Omicron variant.

Federal ministers and public health officials announced these three new steps on Tuesday during an update on the latest measures Canada is taking, with the aim of preventing further importation and spread of the variant of concern.

The new testing requirements mean that all air travellers coming from outside Canada, with the exception of the United States, will now need to be tested at the airport when they land in Canada, on top of the existing pre-departure test requirement.

The new air traveller testing requirement for non-travel ban countries is set to come into effect “over the next few days,” said Health Minister Jean-Yves Duclos. He expects this will see approximately 32,000 tests being administered at Canadian airports per day, with the government covering the cost of these tests.

Duclos said Canada is preparing for a “possible extension” of this policy to include the United States and the land borders if the situation evolves to the point that re-imposing further restrictions on Canada’s borders is warranted.

While it remains unclear just how transmissible and severe infection by the variant B.1.1.529 might be, Duclos said given that Omicron is highly mutated, the federal government is asking the National Advisory Committee on Immunization (NACI) to quickly provide an update on its directives on the use of COVID-19 vaccine boosters.

“This measure, this call that we are making is to ask NACI to provide quick guidance on whether we should revise national standards, national attitudes, and actions on the use of boosters across Canada in the context of the new Omicron variant,” Duclos said. “We are explicitly asking NACI to come up quickly with a revised view on where, and how, and to whom these boosters should be administered.”

While all provinces and territories are handling how boosters are being prioritized in their jurisdictions, access is not currently widespread, with the conversation continuing to play out over whether Canada should be offering third doses to healthy adults or sending those shots to other nations who do not have the kind of access that Canada does.

In terms of the travel ban, Nigeria, Malawi and Egypt will join seven other African countries— South Africa, Mozambique, Namibia, Zimbabwe, Botswana, Lesotho and Eswatini—that the federal government moved to restrict travellers from on Friday.

The policy bans the entry into Canada of all foreign nationals who travelled to these countries in the last 14 days. Canadians, permanent residents as well as all those who have the right to return to Canada will still be able to return home but will face new measures upon arrival. 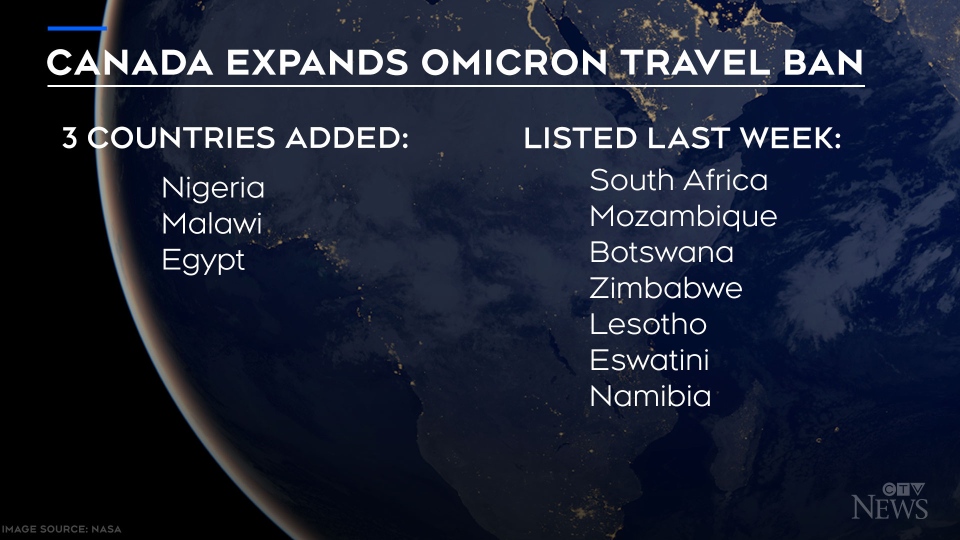 All returning Canadians and others with right of entry will have to be tested before entering Canada, and effective Tuesday night, that test cannot have been administered in one of the 10 countries on the list. This means that those looking to get back to this country will first need to go to a third country to receive a negative test result before travelling home.

Once landed, returning travellers from these countries who are vaccinated will have to be tested at the airport upon arrival and remain in a government quarantine facility until they receive a negative result. Then, they can go home to finish isolating as the await their day eight test result.

Those who are unvaccinated will have to quarantine for the full 14 days in a government facility.

“These testing measures will allow us to assess the evolving situation and determine any additional and appropriate measures,” said Transport Minister Omar Alghabra.

The government said singling out these 10 countries, when Omicron has shown up in other countries, is because of the rate of community transmission.

As of Tuesday evening, seven cases of the variant of concern have been confirmed in Canada, with public health officials cautioning that more cases will likely be discovered in the coming days.

Ontario, Quebec, Alberta, and British Columbia all have detected cases of the variant, though health officials across the country are doing targeted testing of people who have travelled from the southern African countries subjected to the ban.

Federal officials said Tuesday to expect the situation and federal policies to continue to evolve.

“This is what we are doing today, it may well be that as we gain time we find that the new variant is of less concern than what some experts might be fearing, but the situation might also evolve differently, so we're reminding Canadians that travel rules and border rules in particular can always change… and we will be watching the situation as all Canadians will do over the next days and weeks,” Duclos said.

In an interview on CTV News Channel’s Power Play, Alghabra said that the government will likely be re-assessing the rules in the next two to three weeks, but added it’s too soon to say what the travel situation will be like come the holidays.

“This is going to add other measures at the border, and we are going to work very hard with our partners at airports and CBSA to make sure that the process is as smooth as possible… But I do want to ask for patience and understanding why these measures are important,” he said. “I understand how frustrating this whole thing has been, but what we're doing is really to avoid going back to lockdowns.”

Reacting to the news, opposition MPs on CTV News Channel’s Power Play expressed their desire for more clarity over the measures, but voiced support for temporary measures given the current pandemic situation.

Unvaccinated travellers barred from planes and trains as of Monday

These provinces have confirmed cases of the Omicron variant

Here's what vaccine manufacturers have said about the Omicron variant

Omicron was in Netherlands before South Africa discovery announcement