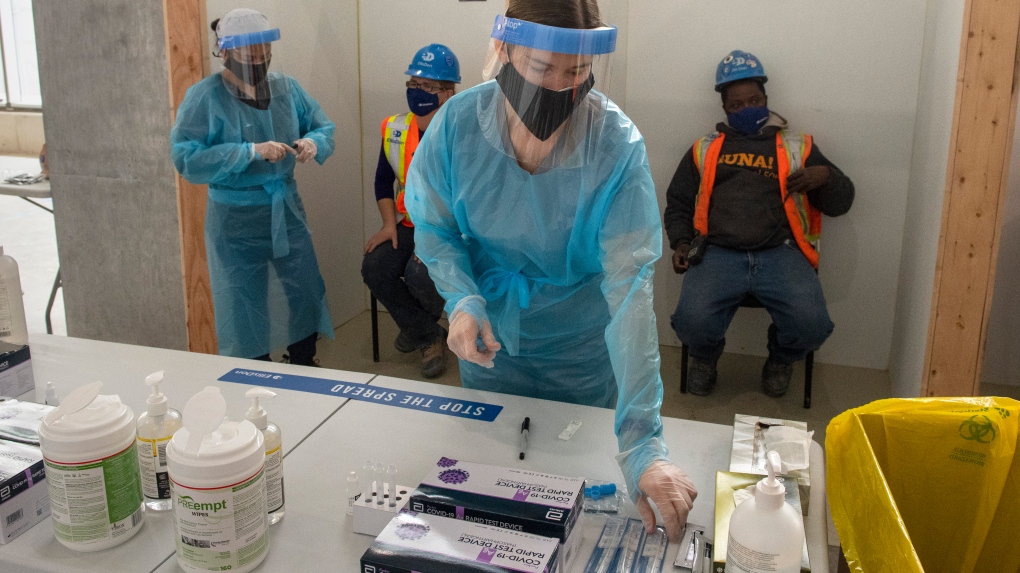 OTTAWA -- With a fraction of the rapid COVID-19 tests Canada has procured actually being used, the federal government is planning to begin offering them directly to more businesses and organizations, Prime Minister Justin Trudeau announced on Friday.

In addition to working with provinces to make tests available—including to small and medium-sized businesses in hot spot regions in Ontario through pick-ups at Shoppers Drug Mart locations—the federal government has launched a federal portal where organizations can apply to receive free rapid tests for their workplaces.

“Accessing rapid tests is key to identifying and isolating cases, and therefore reducing the risk of further outbreaks,” Trudeau said. “More screening and testing means safer workplaces, and less community transmission. That will help us reopen our economy, faster.”

As of May 6, according to the federal government, the Liberals have procured and received nearly 42 million rapid tests. Of those, nearly 30 million have been sent out to provinces, territories, or directly to large workplaces. However, only approximately half of them have arrived at their final destination where they are intended to be administered, and of those, just 1.9 million have actually been used, according to Health Canada.

Rapid tests, otherwise known as antigen testing, offer COVID-19 test results in 15 minutes or so, and are generally used as a first layer of screening before those who receive positive results are given a follow-up standard PCR test to confirm their infection status.

The initiative has been welcomed by the Canadian Chambers of Commerce, which is calling it a positive step towards “closing the gap” between herd immunity and reopening businesses.

“The third lockdown must be the last, and to ensure it is, we need to bring more tools to the fight against COVID-19. Rapid testing will play an important role in keeping workers safe and helping many businesses reopen and stay open. That’s the only path to real, sustainable economic recovery,” said Canadian Chamber of Commerce President and CEO Perrin Beatty.

However, Beatty said gaps remain when it comes to workplace rules around rapid screening and the provincial authorizations for them to be conducted by businesses rather than health professionals.

Using chambers of commerce across Canada to help distribute these rapid tests to smaller workplaces is an expansion of a rapid screening pilot program started in the Kitchener and Waterloo region of Ontario that saw more than 120,000 rapid tests sent to 1,500 businesses in its first two weeks of operation, helping to identify asymptomatic workers.

Non-profit, charitable, and Indigenous community organizations will also be able to access rapid tests, through the Red Cross.

This announcement comes on the heels of new jobs numbers that showed that more than 200,000 jobs were lost in April given the third wave-prompted shutdowns.

It also follows pressure from the federal Conservatives to deploy a rapid testing strategy.

“I think the provinces have done their best with limited vaccines, limited rapid tests, and limited information from the federal government,” said Conservative Leader Erin O’Toole ahead of the prime minister’s announcement on Friday. He said rapid tests will be part of Canada’s reopening, from tamping down workplace spread, to allowing Canadians to safely travel.

The Public Health Agency of Canada has issued interim guidance on how to best use these tests.