Feds continue to seek masks, other PPE after admitting stockpile 'likely' not enough

OTTAWA -- As the government admits it "likely did not have enough" personal protective equipment like masks stockpiled ahead of this pandemic, it has pushed forward with aggressively procuring more.

Given that China manufactures the lion’s share of the world’s supply of personal protective equipment (PPE), its decision to close factories amid the COVID-19 outbreak created a fatal collision between lack of supply and increased demand.

As a result, reports emerged of front-line workers being forced to ration and reuse items like masks as they care for patients with COVID-19.

Meanwhile, Canada has been pushing to procure masks and other PPE in an increasingly competitive global market -- all while pushing for increased domestic production.

Here’s what that push has yielded to date.

While there has been mixed messaging on whether the general public should be wearing masks, one thing that's clear is that health-care workers on the front line require these specific masks to curtail their risk of infection as they work with COVID-19 patients day in, day out.

Meanwhile, Health Minister Patty Hajdu said on Thursday the government secured 10 million masks this week alone. Among those, she explained that 1.1 million masks were delivered last night in Hamilton, 500,000 were validated after being donated by China's Jack Ma Foundation, and they have 700,000 masks from the government stockpile.

A mechanical ventilator is a machine which, when attached to a patient, forces air into their lungs and helps support their breathing muscles -- making it key in the treatment of COVID-19 patients, who can develop severe respiratory illnesses.

Hajdu confirmed Canada is the process of shipping 174 ventilators, while they've pushed to order many more. Anand said on Tuesday the government had ordered 1,570 ventilators from companies both within Canada and around the word -- and they're looking to order an additional 4,000 if needed.

"That is an absolutely critical area and pulling out all stops to do that. Identification of cases and then managing the close contacts is the key to the public health response," Tam said in a press conference on Tuesday.

Key to increasing testing capacity is a push to procure more test kits. Emily Harris, a spokesperson for Minister Anand's office, would not confirm exact figures of the current supply of test kits. However, she told CTVNews.ca on Thursday that Canada "has ordered enough tests for millions of Canadians -- many of which are rapid testing kits.

Beyond the ventilators and masks, the government also confirmed that it has procured large numbers of gloves and swabs to assist on the frontline of the fight against COVID-19.

"Thousands of gloves and swabs are being distributed across Canada," Hajdu said on Thursday.

Minister Anand also hinted Tuesday at a wide variety of medical supplies and equipment that the government is working to procure.

She also said we can expect these numbers to increase -- fast.

"We are taking a very aggressive and proactive approach to procurement every day. We are working 24/7. This country has never seen procurement like it is occurring now. It is broad-based and aggressive," Anand said. 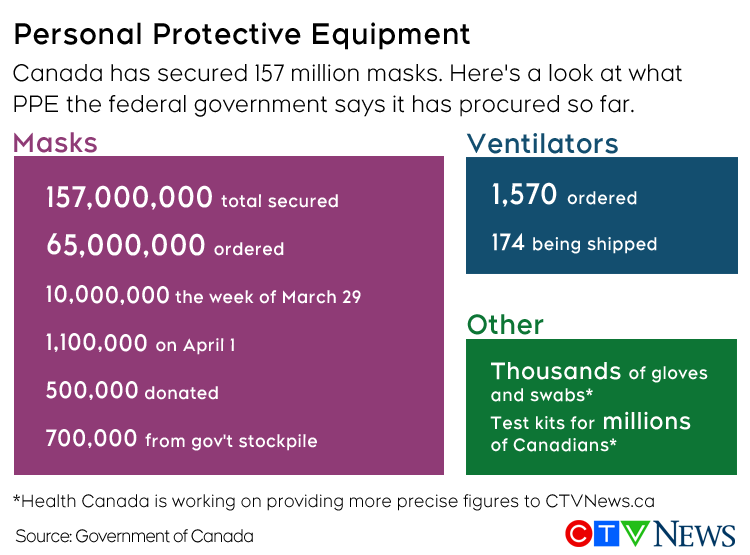 Feds urge med students, retirees to volunteer in the fight against COVID-19

One-third of community-based physicians say they will run out of medical supplies in days: survey

Ontario forecasts up to 15,000 COVID-19 deaths with health measures in place

To wear or not to wear? Canadian doctors weigh in on use of face masks for all

Would you like confession with that? Canadian Catholic church offers drive-thru sacraments