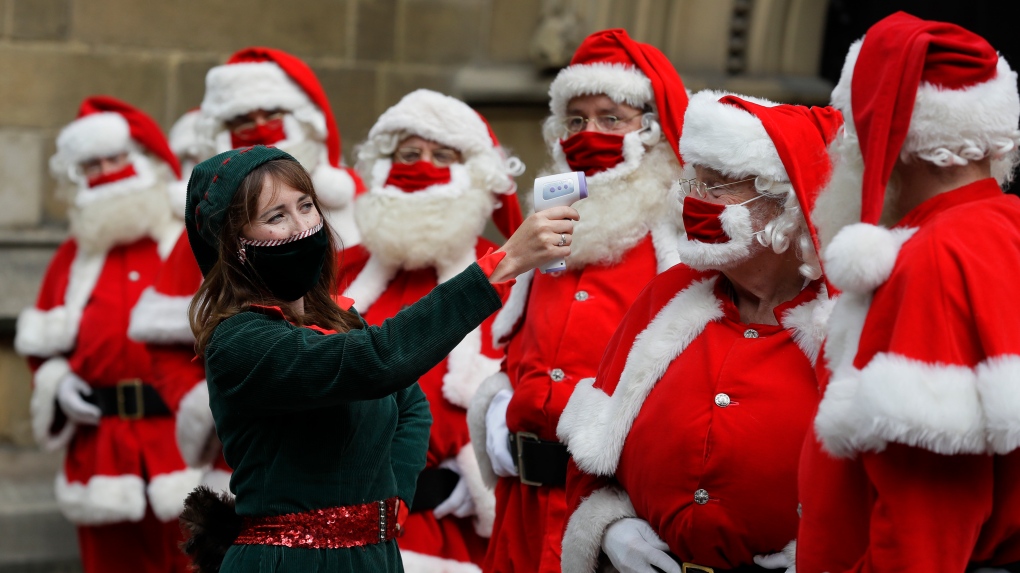 TORONTO -- It's unlikely most Canadians will enjoy a holly jolly Christmas season of gatherings, carolling and travel, say public health experts who encourage those who revel in holiday traditions to accept more sacrifices ahead.

As the pandemic's second wave maintained its grip in many parts of the country, political leaders acknowledged this week that recent limits on social gatherings, restaurants, gyms and entertainment venues in some hot spots have not significantly changed the trajectory of COVID-19 infections.

Nevertheless, Prime Minister Justin Trudeau, Canada's deputy chief public health officer Dr. Howard Njoo and Quebec Premier Francois Legault were among those urging Canadians to step up efforts that could flatten the curve and allow for some modified festivities by Dec. 25.

The warning followed weeks of unclear messages and confusing advice that likely played a role in cases now being linked to Thanksgiving weekend, says Toronto infectious diseases expert Dr. Andrew Morris, who stresses the importance of frank talk about the severity of the pandemic.

"We need to be able to say when there's uncertainty but we also can't have comments like (Monday) at the provincial press conference, when the Ontario health minister said that there are some hints of things on a decline (in Ontario hot spots). That is very misleading information and all it does is it sows doubt in the public," says Morris, a physician at Toronto's Mount Sinai Hospital.

"Or even to suggest that we're still waiting to see the effect of our measures, (that) it's too early to tell, when I think everyone around us -- most people -- should recognize that things are still rising substantially."

On Wednesday, Ontario Premier Doug Ford countered bleak outlooks on Christmas by noting "people get tired, but I've got to give them hope."

"Let's all work together and let's make Christmas happen. Let's always think of the glass as half full," said Ford. "Let's not think the glass is half empty -- we can do it. We will do it by working together."

Morris says it's unfair to impose a timeline on hoped-for victories, pointing to many uncertainties that make it hard to predict what infections will look like in December. He also questions how accurate Ontario's data was to begin with, noting he continues to hear about some people waiting days for a test -- a problem that would make it "near impossible" to get a handle on COVID-19's spread.

But he doesn't expect much will change over the next two months.

"I would be absolutely shocked if we aren't seeing really high peaks in six weeks' time."

The colder temperatures and shorter days have coincided with mounting public frustration over months of economic, scholastic and social upheaval, which in recent weeks escalated to instances of outright defiance of public health directives.

Trudeau acknowledged frustrations while cautioning the nation that "unless we're really, really careful, there may not be the kinds of family gatherings we want to have at Christmas."

And while Legault recognized the "vast majority" of Quebecers have complied with public health guidance, he said it was "not enough" and that "big parties for Christmas" were unlikely.

In order for public health measures to hit home, the advice must be clear and consistent, and politicians should be transparent about their rationale for social restrictions, says infectious disease epidemiologist Ashleigh Tuite.

She says it's far more helpful to offer concrete examples of what people should do, than admonish them for what they should not do.

"The reality is we know that people are going to bend the rules a little bit. First of all, give people creative ideas of how they might celebrate the holidays," says Tuite, a University of Toronto professor who especially wanted holiday travel guidance for university students living away from home.

Still, Tuite says tapping into shared hopes can be a powerful motivator to keep people committed to COVID-19 sacrifices: "We need something to look forward to."

Many of the holiday season's highlights have already been scrapped or are unlikely to take place, including bustling Christmas markets, Santa Claus parades, mall photos with Santa, blockbuster movie releases, and holiday concerts and performances.

But that doesn't mean Christmas is cancelled, says health economist and policy analyst Peter Berman of the University of British Columbia, who suggests a near-normal celebration might be possible in the least-impacted regions.

In the same way many Canadians found ways to celebrate a scaled-back Thanksgiving and are now modifying their Halloween fun, Berman encourages people to focus on accepting a new reality -- one he expects will curtail social gatherings well into the new year.

"We should probably turn our attention not so much to lamenting that we won't have the Christmas we're all used to, but rather thinking, 'How can we make the best of enjoying the one we're going to have together?"' says Berman.