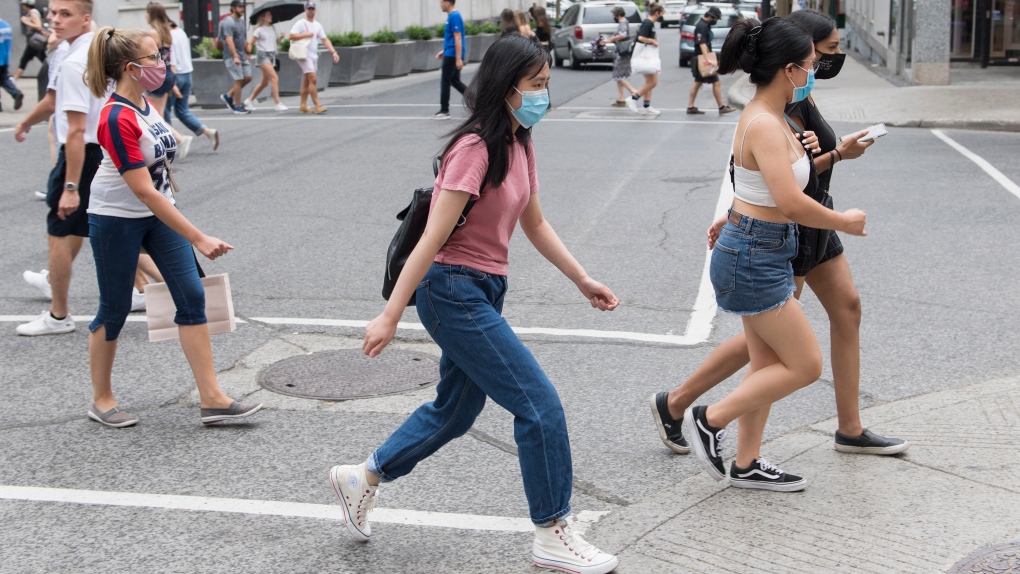 TORONTO -- The COVID-19 pandemic has been particularly hard on Canadian youth and questions have arisen about how long it will take for them to recover economically, and what that will look like post-pandemic.

The federal Industry Strategy Council (ISC) noted in its “Restart Recover and Reimagine” COVID-19 report published in October 2020, that “women, youth, Indigenous peoples and new Canadians were disproportionately impacted by the pandemic.”

The ISC report stated that those Canadian populations were being “left behind” in the recovery process as they are “overrepresented in the retail and tourism sectors” which were among the most severely hit in the pandemic, decimated in lockdowns and stay-at-home orders nationwide.

It’s an assessment that Scott Terrio, a consumer insolvency manager at Hoyes, Michalos & Associates Licensed Insolvency Trustees based in Ontario, agrees with.

“I’ve been meeting with people for 10 months now whose jobs were just basically vaporized in March and…people in their twenties are in industries that have just been crushed…they've probably paid a bigger price than almost any other demographic,” Terrio said in a telephone interview with CTVNews.ca Wednesday.

That sentiment was echoed by Katherine Scott, a senior researcher at the Canadian Centre for Policy Alternatives’ national office in Ottawa, in a telephone interview with CTVNews.ca Wednesday.

“In December, where we would normally see an uptick in employment related to the holiday season, we saw a significant drop in youth employment,” Scott said.

“One of the statistics that sort of struck me from last month's labour force survey was there were almost 250,000 fewer young people employed compared to December 2019. That's significant – and within this group, there were huge employment losses amongst young women as well as compared to young men,” she said.

The next labour force survey is slated for release Friday, Feb. 5, which Scott described as “probably grim.”

In the earlier stages of the pandemic last spring, Terrio said Canadians were phoning his firm “in a panic” and that many “fell back on resorting to consumer debt to make ends meet,” painting a bleak picture of what many youth are experiencing.

“Not only are they unemployed, but they’re racking up debt in the background, because let’s face it, a CERB cheque doesn’t cover your rent in a city like Toronto, you still have living expenses…a lot of people are now coming out of this with an inordinate amount of debt, whether it’s credit cards or lines of credit,” he said.

Terrio also flagged the confusion around Canada Emergency Response Benefit payments, noting that “on top of everything else” CERB “was paid in gross dollars, not net, and most people don’t speak that language.”

“People who are borrowing on their credit just to live and whose job prospects basically aren't there for the foreseeable future are not going to be able to pay a $2,000 or more tax bill when it comes time,” Terrio said.

“Tax season is coming, and you can bet the CRA is going to try and help the government balance the books.”

For young people in post-secondary education, the already daunting task of paying back looming student loans is compounded by loss of income and lack of job prospects.

In October, the federal government resumed collecting payments and charging interest for the approximately one million Canada Student Loans borrowers after a grace period of six months.

“Increasingly students today carry much higher debt loads and they carry that forward [for years]. That kind of debt load or those constraints on anyone, whether they have low income or not, is a huge barrier to making positive advances in a way that wasn't the situation 20 or 30 years ago,” Scott said.

All the factors facing Canadian youth combined allow for Terrio to estimate it would take “at least five years” for youths to recover economically from the pandemic, but it could be a decade before any real progress is made.

“I can easily see it being 10, because 10 years goes by fast. I think a lot of people will take issue with that number - but if you do my job long enough and deal with people who are in normal debt situations, this is abnormal,” he said.

Scott says she’s thinking of two factors when examining the lens of long-term recovery - drawing on the example of the 2008 crash and the lessons learned in another recession that was “scarring.”

“Youth need to be an explicit focus in our recovery planning.”

For Terrio, thinking long-term for economic recovery for youth means coming up with strategies for a labour force realizing that shuttered industries wont “magically” be able to rehire all the employees they had to cut.

“I can’t see employment rolling back out evenly, in any kind of quick way, because there’s going to be a lot of businesses not there anymore,” he said.

Terrio said economic recovery for youth won’t have a chance until COVID-19 vaccinations are well established, allowing things to open back up for both businesses and consumers alike.

“They've got to get the vaccinations underway because I think this is about consumer confidence. People want to spend,” he said.

Scott says that conceptually, Canadians and the government need to realize “we're firmly in the middle of it [the pandemic]. We haven't really got the recovery yet, we're still in the emergency phase and we’re not focusing on who needs to be centred,” she said.

“I think we have to be very explicit about centering the economic needs of young people, and that includes young people that won't be involved in post-secondary because…those with lower levels of education face even more barriers,” she said. “We have to look at the tools we have, we have to look at the affordability of post-secondary school, as well as a good jobs strategy, and we need to be thinking about the quality of jobs on offer.”

Scott said the federal government’s summer jobs program as well as any provincial youth employment schemes need to be extended in light of the pandemic.

The federal government did announce a “comprehensive emergency support package,” in 2020, which included further boosts to the Youth Employment and Skills Strategy.

This economic shutdown is also an opportunity to re-evaluate the income rates needed for youth to pay off their debts, pandemic-related or otherwise, Terrio said.

“I just can't see how a person in their twenties who's racked up a bunch of consumer debt through the pandemic, plus taxes and their jobs not necessarily coming back…they’ve got student debt, how do you pay all that back within 10 years? You just don't have the income power to do it,” Terrio said.

“Income is always the issue - debt is the problem, yes, but the reason people get debt is because they don't have enough income and the cost of living is insane,” he explained, adding that he thinks the way the inflation basket is measured is “kind of a joke.”

“I meet with people every day who've had twenty or thirty thousand dollars’ worth of debt and they've been dragging it around for years,” he said. “I don’t know anyone whose income has gone up tenfold.”

Those on the younger end of the youth scale, measured by Statistics Canada as those aged 15 to 29, who represent “Generation Z,” will be entering into an unprecedented corporate landscape when they graduate, Terrio said.

“If I'm in high school right now, I'm going ‘how can I “pandemic-proof” myself?’” he said. “What do I study, what do I go into that wont get affected by this? What if the next 10 years this just keeps happening over and over with different strains?”

“We have lost so much certainty.”

Why is Alberta requiring a 24-day quarantine for those who live with COVID-19 variant patients?

Fewer than 1,200 new cases of COVID-19 reported in Ontario, another 67 deaths logged

Health experts warn of dangers of B.1.1.7 variant as it emerges in more provinces

A British teenager fell into a 10-month coma before the pandemic. Now he's waking up in a new world

With Novavax deal, Canada could be producing COVID-19 vaccine domestically by the fall

Why the WHO won't call it the 'U.K. variant', and you shouldn't either