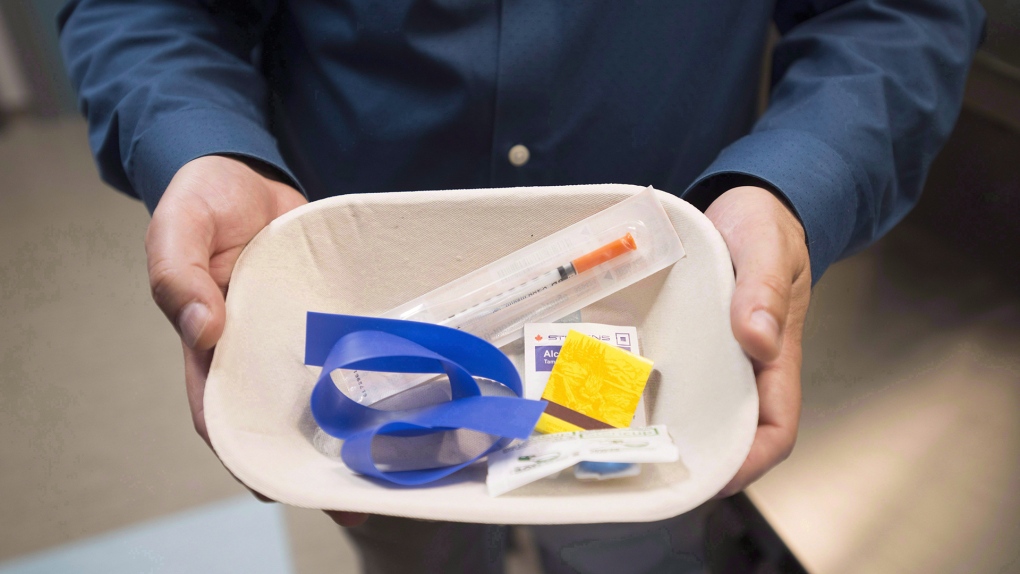 A supervised drug consumption site has opened in Lethbridge, Alta., after the city recorded more than 54 overdoses in recent weeks, some from what police are calling a potent batch of a dangerous street opioid. A injection kit is seen inside the newly opened Fraser Health supervised consumption site is pictured in Surrey, B.C., Tuesday, June 6, 2017. THE CANADIAN PRESS/Jonathan Hayward

Users filter into the brick building -- dubbed "the trailer," a nod to the service's former digs -- offering up greetings and grins en route to 16 basement booths, each furnished with a chair, a shatter-resistant mirror and a needle disposal box.

The injection facility halved the number of booths to ensure distancing when the COVID-19 pandemic broke out in March, resulting in a "huge increase" in overdoses in the surrounding community, says Muckle, who for 20 years has headed Ottawa Inner City Health, which provides health care for vulnerable populations.

She restored full capacity in response to the spike in overdoses but many services remain reduced or accessible only virtually.

"We've seen a really frightening, rapid increase in the number of people using drugs in this pandemic," Muckle says.

"I think people feel like maybe they just aren't going to make it through this one."

Drug users face greater dangers as the second wave forces harm reduction sites and outreach programs to curtail their services, leaving at-risk communities out in the cold. Shorter hours, physical distancing measures and a curfew in Quebec, combined with a more lethal drug supply due to border closures, have sent addictions services scrambling to help users across the country as opioid overdoses and the attendant death toll continue to mount.

In British Columbia, fentanyl-related deaths had been on the decline for more than a year until April, when monthly numbers routinely began to double those of 2019.

Deaths linked to fentanyl, a lethally potent synthetic opioid, reached 360 in B.C. between September and November compared to 184 in the same period a year earlier, according to the B.C. Coroners Service.

Opioid-related deaths countrywide could climb as high as 2,000 per quarter in the first half of 2021, far surpassing the peak of nearly 1,200 in the last three months of 2018, according to modelling from the Public Health Agency of Canada.

It pins the blame largely on a lack of supports, a corrupted drug supply and users turning to substances as a way of coping with high stress.

Social services have limited capacity or shut down communal spaces, while programs from meal provision to laundry -- some of which are near injection sites, encouraging their use -- are now tougher to access.

Benzodiazepines, or benzos, have been detected in drugs circulating in parts of several provinces. Users can be difficult to rouse and slow to respond to naloxone -- the drug that reverses opioid overdoses -- and more likely to overdose when fentanyl or other opioids are also in the mix.

"With the benzodiazepine, there is no antidote for that," said Paula Tookey, program manager for consumption and treatment at the South Riverdale Community Health Centre in Toronto.

"People are sedated deeply for hours, often 10 hours or even more," forcing workers to turn away other users who then may shoot up alone, she said.

The Riverdale site saw 42 out of 1,110 visitors overdose last month -- none fatally -- compared to just two overdoses in 700 visits in December 2019, Tookey said.

"We used to have memorials, which were super important for people because we have constant deaths," Tookey said.

"A lot of our folks don't have families ... The community and other people in their situations and the workers are kind of the informal family that people have."

Limits on gathering in the pandemic have also closed off a critical source of knowledge sharing.

"There's no people to say, `Hey, that's really, really strong, don't use that much,"' said Karen Ward, a drug rights advocate as well as a drug policy and poverty reduction consultant with the City of Vancouver.

"Those facts, that social information, is really, really important to have. You know, `Hey, there's a bad batch,' that sort of thing."

Health authorities run alert systems for poisoned drugs across B.C., but their patchwork structure leaves lives in jeopardy, she said.

"Unfortunately, people are less likely to go outside their door basically past 8 p.m.," she said. "But we do know that people don't necessarily stop taking drugs."

Even before the curfew, the number of EMS calls where paramedics administered naloxone to opioid users in Montreal and the suburb of Laval nearly doubled last year, reaching 270 compared to 146 in 2019, according to the Urgences-sante ambulance service.

Another danger lies in sharing needles -- injection sites provide clean ones -- and the risk of blood-borne infections.

Advocates, outreach workers and users are calling for better drug alert systems and broader support services in the short-term.

However, nothing short of decriminalization of possession of small quantities of drugs -- requested by Vancouver Mayor Kennedy Stewart to the federal government -- and more stable housing will help beat back the tide of overdoses, Muckle says.

"At the end of the day, if people are unhoused, all of the things that you're doing really have a marginal benefit," Muckle says.

"You cannot heal in a shelter .... A home is such a fundamental part of our health."

Meanwhile, the social isolation and unsupervised consumption of tainted drugs ratcheted up by the pandemic bode ill for vulnerable Canadians.

"We had a pretty significant problem with addiction when this pandemic started. We're going to come out of it way worse."