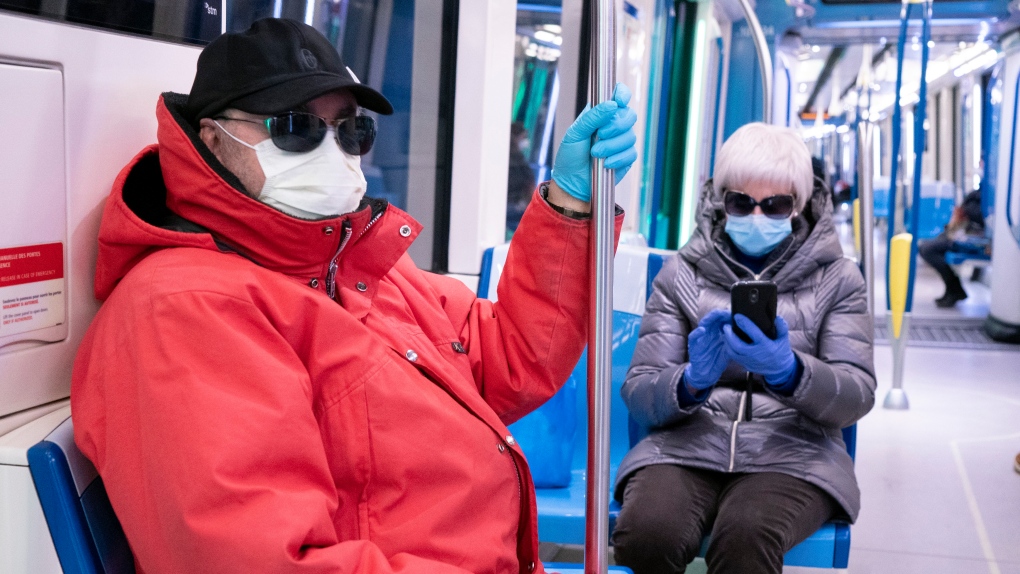 A couple wearing a protective masks ride a near empty subway train in Montreal, on Wednesday, April 22, 2020. THE CANADIAN PRESS/Paul Chiasson

TORONTO -- You walk down the sidewalk and coronadodge some covidiots and moronas standing too close together before you complete your Corona-Waltz home for virtual locktail hour when you can enjoy a quarantini with some friends from your dedicated Zoom-room.

While that may have sounded nonsensical to some, the new words in that sentence are just some of the inventive phrases emerging out of the COVID-19 pandemic.

This so-called “coronaspeak” is being used by ordinary people to describe something that is happening to them which has never happened to them before.

That’s according to Tony Thorne, a linguist consultant at King’s College in London, England, who has been meticulously collecting and cataloguing the neologisms that have appeared since the novel coronavirus became known.

“In any big social upheaval, there’s always a lot of new vocabulary, new words that are generated,” he told CTVNews.ca during a telephone interview from London on Thursday. “And this is the biggest social upheaval we’ve seen, I think, in most people’s lifetime.”

Because of this sudden disruption in daily life, Thorne said people around the world are adopting official medical terminology espoused by health and government officials as well as creating their own, entirely new language.

“Some of it is quite funny. Some of it is slang, people trying to probably cheer themselves up and raise their morale,” he explained.

Thorne said he’s been able to record more than 1,000 words for his pandemic lexicon or dictionary since the health crisis began by scouring social media, the news, and appealing to the public to send him what they find.

While many of the words are brand new, Thorne said some of the terms he included because they’ve been revived and they’re back in popular usage. He provided examples such as, “unprecedented,” “hunkering down,” “cabin fever,” “stir crazy,” “uncertain times,” “the new normal,” and “bounce back,” as phrases that are experiencing a resurgence during the pandemic.

The linguist also said he’s included medical and government terminology in his catalogue because a lot of it was unfamiliar a few months ago and has now become part of everyday speak.

“There's the official language which the government or medical authorities use and we have to learn and understand it to know what it means and sometimes we have to use it ourselves,” he said.

As for what he plans to do with all of the words he’s collected during the pandemic, Thorne said he’s going to publish them on a King’s College website for the public to view.

“So the people have got a kind of locked-down lexicon or COVID dictionary,” he said with a laugh.

Armchair virologist – Someone who doesn’t know anything, but is posing as an expert.

Coronacation – Cessation of study or work due to the pandemic, viewed as a holiday.

Corona-cuts – A hairstyle during the pandemic.

Coronadodge – Physically avoiding others out in public so as not to contract the virus.

Coronalusional – Suffering from disordered thinking as a result of or during the COVID-19 crisis.

Coronasplaining – Similar to “Mansplaining,” when someone who doesn’t know very much about a topic lectures others.

Corona-Waltz – Manoeuvring around other people in public, like a dance, to avoid be close to them.

Covidiot – A person behaving irresponsibly in conditions of containment.

Drivecation – A holiday, typically in a motorhome or RV, in one’s own driveway. Thorne said he suspects this one may have originated in Canada.

Morona – A person behaving stupidly because of or during the coronavirus outbreak.

Quarantini – A martini mixed in quarantine.

Zoom-bombing – When people hijack or interrupt a video conference.

Zoom-room – The one corner of the home that is kept clean for video conferences.

Zumped – When someone dumps another person in a Zoom video call.