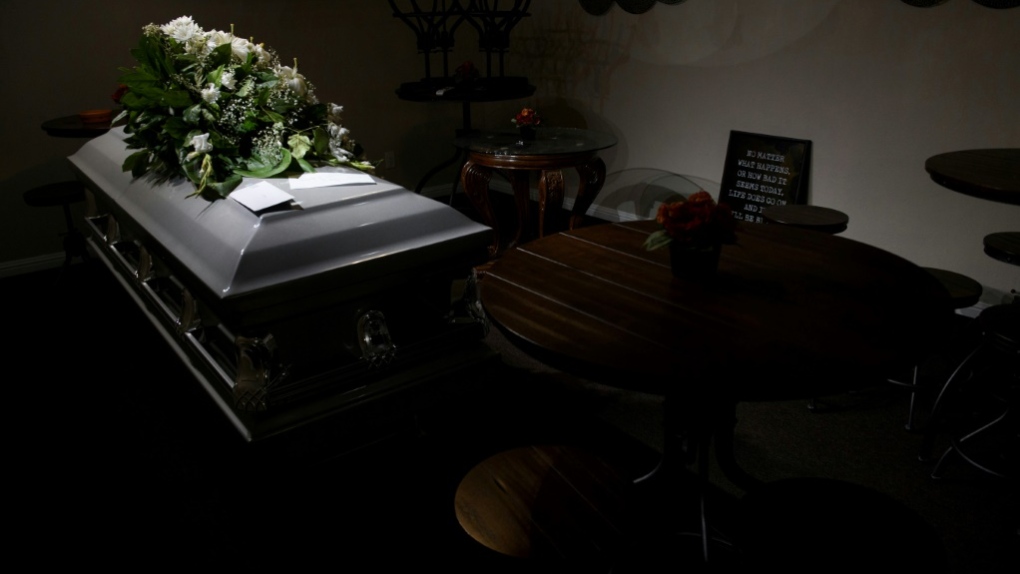 During AFP's visit, a casket topped with a small wreath of flowers occupied the funeral home employee break room beyond the front desk. (AFP)

LOS ANGELES -- A corpse in the break room. Embalmed bodies in the garage.

Boyd Funeral Home, a small family business in Los Angeles, is so overflowing with COVID-19 victims it has begun turning away customers for the first time in its history.

"The weekend before I turned down 16 families that I couldn't do services for," said owner Candy Boyd.

In the past two weeks, as coronavirus has slammed Los Angeles, some 80 per cent of the deceased passing through her doors died from COVID-19.

One-in-10 residents of the nation's second largest city has been infected since the pandemic began, with nearly 300 people dying daily last week as the virus surges.

At Boyd's reception desk, the phones keep ringing, mostly going unanswered as her overwhelmed staff have abandoned setting appointments and now tell customers to just show up and get in line.

She is even receiving calls from desperate families in other counties more than an hour's drive away.

Many hospital morgues are also full, with local coroners using refrigerated trucks to accommodate the victim load and some cemeteries warning of two week waiting lists.

"Things are getting more and more out of control," said Boyd.

During AFP's visit this week, a casket topped with a small wreath of flowers occupied the employee break room beyond the front desk. It had been there for a week.

"This room is our lunch area, however, we are having to use this room for space for caskets," said the owner. "We've done the services but the cemetery is so backed up... we have to hold them here until they have time to do the burial."

BODIES IN THE GARAGE

Like much of surrounding South Los Angeles, the Westmont neighborhood is mainly inhabited by Black and Latino working class communities living in densely populated homes.

These demographics have been hit particularly hard by COVID-19, with mortality rates two or three times higher than nearby affluent communities.

"He hasn't even gotten a chance to really finish because we needed (to store) these," she said, pointing to corpses wrapped in body bags lying on the rough shelves.

"I would never imagined having to build that in my wildest dreams."

Some funeral homes have reported a shortage of coffins due to lack of wood, though Boyd's supplier has kept up with orders so long as they are placed early enough.

Worried about her five staff catching the virus at the start of the pandemic, Boyd initially refused to accept COVID-19 victims.

"I was having nightmares. I couldn't eat, I couldn't sleep," she recalled.

Boyd has since created safety protocols and now feels comfortable dealing with the influx, although she insists it is "not about the money."

"It's about helping families and helping them get through this crisis," she said.

"It takes a toll on me every day, I'm dealing with this," Boyd added. "And I have to keep a stolid face because I have to be there for the family."

Sometimes, customers are people she has long known personally.

Other times, Boyd encounters families who still refuse to wear masks or respect physical distance, even as they make arrangements to bury their loved ones.

"The numbers don't lie. It's true. It's real," said Boyd of the disease.

Cases in California have more than doubled since early December to 2.8 million.

"If you don't take it serious," she warned an AFP journalist, "you could be one of the people that are in my back row back there, you know!"