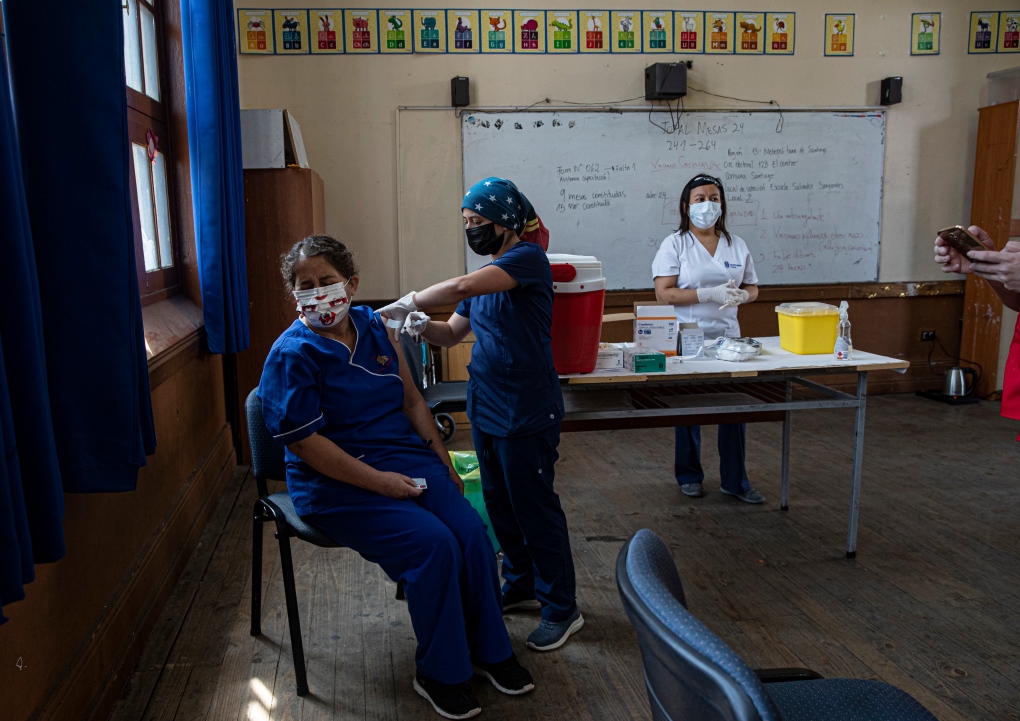 A teacher gets a shot of the CoronaVac vaccine for COVID-19, by China's Sinovac Biotech, at Salvador Sanfuentes public school during the start of the vaccinations for educators in Santiago, Chile, Monday, Feb. 15, 2021. The government aims to vaccinate teachers and school administrative workers nationwide before the start of the school year on March 1. (AP Photo/Esteban Felix)

SANTIAGO, CHILE -- On Christmas Eve, nurse Maria Paz Herreros administered Chile's first coronavirus vaccine. In the two months since then, she's given more than 2,000 shots as Chile has raced ahead in Latin America's immunization campaign.

On Wednesday, as Chile marks a year since its first confirmed coronavirus case, more than 3.5 million of the country's 19 million inhabitants people have received at least one jab -- over 61,000 have gotten both.

Chile is sixth in the world in terms of the total number of doses administered as a percentage of the population, according to data on large countries collated by AFP, lagging behind only Israel, the United Arab Emirates, Britain, the United States and Serbia.

In terms of first doses only, it ranks fourth -- miles ahead of any Latin American peers and outstripping the European Union by more than three-to-one.

"I was very excited, it was a very nice feeling in my heart to finally see the vaccine," Herreros recounts of December 24, when she played her historic part at the Metropolitan Hospital of Santiago.

Chile was first in Latin America, along with Mexico and Costa Rica, to receive delivery of coronavirus vaccines last year.

After starting with healthcare workers in December, the country kicked off mass immunization for the general public on February 3, starting with the elderly.

The campaign has progressed at the break-neck speed of some 200,000 jabs per day, and seeks to reach five million people with at least one dose by the end of March.

By June 30, the country hopes to have given at least one dose to 15 million people.

MORE THAN I IMAGINED

Thousands of people arrive every day at vaccination centers set up in sports stadiums, clinics, gyms or schools.

"It is more than I imagined," said 32-year-old Herreros, who brags about her own record -- the highest number of shots administered among her colleagues at the hospital.

Chile has been hard hit by the COVID-19 pandemic, with more than 820,000 recorded infections and 20,000 confirmed deaths.

The country owes its early vaccine success to having the financial means to buy the stock required as well as a well-established primary health care system and a long history of mass immunization campaigns that goes back to the 1950s.

Already in mid-2020, when the entire country was in lockdown and long before any vaccines were ready for use, President Sebastian Pinera's government secured an order of more than 30 million doses for delivery this year -- at a cost of some $300 million.

Ten million doses were ordered from US firm Pfizer, a similar number from China's Sinovac, and the rest from AstraZeneca, Johnson & Johnson and the UN-backed COVAX mechanism for distributing vaccines to poorer countries.

The country's large network of trade agreements -- with 65 economies in all -- and its decision to participate in, and fund, clinical trials also contributed to its quick acquisition of vaccine doses.

"Chile is a country that is very connected in the world," Rodrigo Yanez, under-secretary for international economic relations in the foreign ministry told AFP.

He is also the head of vaccine purchase negotiations.

The country, he added, had "a very diversified strategy, of laying eggs in different baskets" -- betting on a variety of vaccines, none of which had any early guarantee of success.

Low levels of vaccine skepticism has also helped, with less than 20 percent of the population rejecting the immunization.

"At first they arrived with a bit of fear, with many questions and doubts, but now people arrive without fear, are well informed and have no doubts," said Herreros.

"They come with so much confidence and hope in creating this herd immunity that is so much sought after to protect their families."