OTTAWA -- The first one-shot COVID-19 vaccine from Johnson & Johnson has been authorized by Health Canada, making it the fourth vaccine that can be administered to Canadians.

Health Canada is now the first major regulator to have approved four different COVID-19 vaccines for use, said chief medical adviser at Health Canada Dr. Supriya Sharma during a briefing announcing the approval.

The authorization follows “an independent and thorough scientific review for safety, efficacy, and quality,” Sharma said.

Canada can now use the Pfizer-BioNTech, Moderna, AstraZeneca, and Johnson & Johnson vaccines in its ongoing mass vaccination campaign, largely viewed as a key pillar in overcoming the nearly year-long pandemic.

“This last year hasn't been easy, but we are going to get through this. This week alone almost 400,000 Canadians got a COVID-19 shot. Next week, it'll be the turn of hundreds of thousands more,” Prime Minister Justin Trudeau said Friday.

“Your turn is coming. Millions of doses are on the way, deliveries have been ramping up, and they'll ramp up even more in April. We will continue to work around the clock, and make sure Canadians get vaccinated as quickly as possible.”

Canada’s federal health agency has been assessing the viral vector Johnson & Johnson shot since Nov. 30, and like the AstraZeneca vaccine given the green light last Friday, it will be logistically easier to administer as it can be shipped at temperatures between two- to eight-degrees Celsius and stored in those refrigerated conditions for at least three months.

With the approvals of the AstraZeneca and Johnson & Johnson vaccines, Canada has doubled the number of vaccine options at its disposal in the last week.

Vials of the Johnson & Johnson vaccine can be kept for three hours at room temperature once the seal has been punctured, while it can stay stable if unopened for up to 12 hours.

“This is a game changer,” physician Dr. Lisa Salamon said in an interview on CTV News Channel. “Family doctors can give it to their patients; it can be given in pharmacies, public health units.”

Overall, in clinical trials involving approximately 43,000 participants, the single dose of the Johnson & Johnson vaccine was shown to be 66 per cent effective in preventing moderate to severe COVID-19, two weeks after vaccination.

As with other vaccines, Sharma said common side effects include pain and tenderness at the injection site, headache, muscle pain, fever, and chills. The majority of adverse reactions reported during the clinical trials were mild to moderate in severity, and resolved within a few days.

Health Canada has also approved a clinical trial for the vaccine in children ages 12 to 17 that’s yet to recruit patients, while trials are underway with the other vaccines but do not have Canadian sites.

Dr. Sharma said that it’s possible that by the end of 2021 there will be answers around whether or not these shots are shown to work in youth.

“The good news is that if we have enough other people vaccinated, including everyone else working in school environments and the rest of our population, we've almost achieved a quasi herd immunity effect around kids. And so we've protected them by protecting others, and that's the whole point of trying to vaccinate as many people as possible,” said CTV News Infectious Disease Specialist Dr. Abdu Sharkawy on CTV News Channel.

There is an also on ongoing study considering a second shot of the Johnson & Johnson vaccine, which federal health officials say they’ll keep an eye on.

Seeking to clarify concerns around whether certain approved vaccines are superior given their higher efficacy rates, Sharma said that any of the Health Canada authorized shots will “greatly” reduce the change of contracting COVID-19.

“The efficacy rate does not mean that following vaccination with a vaccine with 66 per cent efficacy, that you will have a 34 per cent chance of contracting COVID-19,” Sharma said.

“It's not just about getting COVID-19, what's really important is whether any of the vaccines will prevent you from being hospitalized, or dying of COVID-19,” she said, noting that all the vaccines approved so far are effective at preventing severe illness or death.

WHEN WILL IT ARRIVE?

The federal government has secured access to up to 38 million doses of the Johnson & Johnson vaccine, with a deal in place for at least 10 million doses and the option to purchase 28 million more.

Trudeau said on Friday morning he spoke with Janssen Canada’s President Jorge Bartolome who confirmed that the 10 million doses are expected by the end of September, though it remains unclear how quickly the initial delivery of these doses could arrive in Canada.

“They are committed to getting the full order of doses to Canada, and they're working on setting up global supply chains as quickly as possible,” Trudeau said.

Procurement Minister Anita Anand said Friday that her department is in the process of finalizing the delivery schedule but shots aren’t set to arrive until April at the earliest.

With the addition of this vaccine to Canada’s COVID-19 inoculations arsenal it’s likely that the overall immunization timeline can be accelerated as past projections showed could happen if additional vaccines came online.

The federal government also announced Friday an increase in shipments from Pfizer, meaning Canada will have a total of eight million vaccine doses arriving by the end of March, up from the initial commitment of six million thanks to this increase and the addition of 500,000 initial AstraZeneca shots that landed this week.

Citing past experience and the ongoing potential for supply chain issues, the government has yet to say whether all Canadians will be able to be immunizer earlier than September, but Trudeau said Friday that it’s possible he’ll have “further good news and good predictions to share in the coming weeks.”

Regulatory approval deeming the Johnson & Johnson shot safe and effective for use in Canada comes on the heels of the United States approving the vaccine candidate last weekend, while other medical regulators such as the European Medicines Agency, continue their examination of the vaccine.

The vaccine was authorized with terms and conditions, including requiring the manufacturer to continue provide information to Health Canada on the safety, efficacy and quality of the vaccine.

With the authorization, Health Canada released a series of documents that detail the consumer information, the regulatory decision summary, as well as more data about the adverse events reported.

The agency says additional detailed information will be published in the coming weeks.

Typically, the vaccine submission review process can usually take up to a year, but because of an emergency order, Health Canada has been able to expedite the authorization process and has been able to assess rolling information as it comes in, rather than having to wait until the end of its work to begin reviewing the findings.

There is still a fifth vaccine still under review by Health Canada, the Novavax vaccine. Health officials said Friday there is “a fair amount” of information outstanding and Health Canada’s decision to authorize or not could be months away. 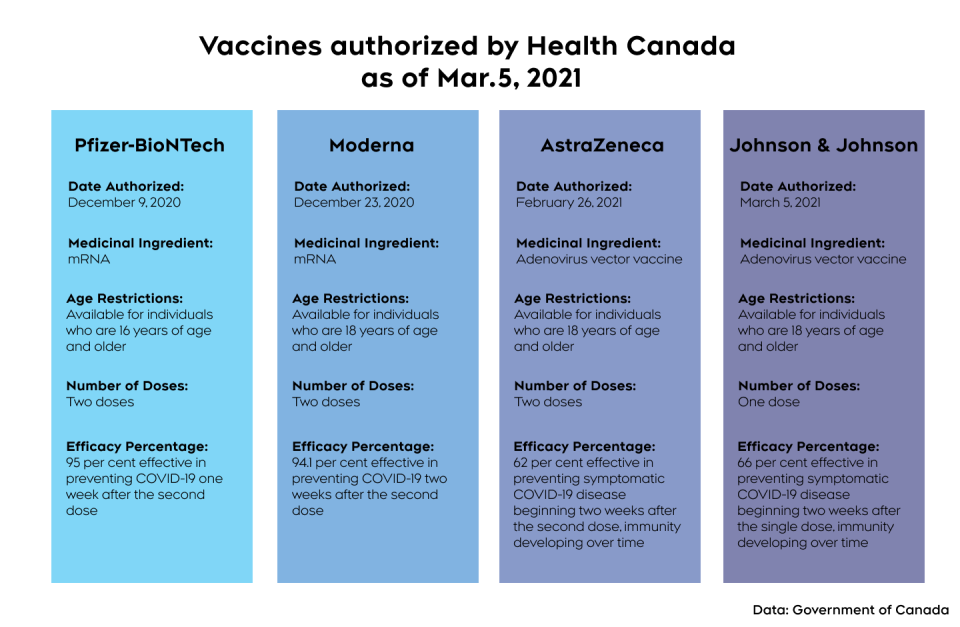