TORONTO -- As an increasing number of public spaces temporarily close their doors and “social distancing” keeps more of the population hemmed into their homes, the question of just what to do with our time is looming large in the minds of Canadians.

So far, museums and galleries such as the Canadian Museum of History, the Canadian War Museum, The National Gallery of Canada, Canada Science and Technology Museum, Canada Aviation and Space Museum, the Art Gallery of Ontario and the Royal Ontario Museum, among others, have closed.

But in today’s digital world, many museums not only have exhibits that can be perused online, but also virtual tours that allow you to walk through the halls themselves.

Here’s a quick selection of some museum exhibits and archives you can explore from your computer or phone.

Google Streetview takes you directly inside the museum itself, allowing you to wander through several exhibits as if you were physically there. Wander through the spacious entrance of the museum past dinosaur skeletons, peek into the Sigmund Samuel Gallery of Canada and stroll through the Canada: First Peoples exhibit.

Virtual tours of this colourful location are also available through Google Streetview, which lets you walk past geometric landscape paintings and a melting steel structure, among other art pieces.

Although it’s hard to replace the physical feeling of being inside the Canadian Museum of History, one virtual exhibit gives you the chance see a standout ceiling mural even closer than you can in person.

The circular painting, “Morning Star,” by Alex Janvier, decorates the ceiling of the dome of the Haida Gwaii Salon within the museum, towering above a bright white staircase. Online, you can zoom in on the mural and spin it to see the four quadrants in high detail. A click of the plus sign in the corner causes a series of links to pop up over the mural itself, with photos and videos attached that explain the significance of each part of the artwork.

Other exhibits listed in the museum’s “Online Exhibitions” section include a dedicated website explaining Inuit prints from Cape Dorset in Nunavut (with videos, interviews, pictures and interactive puzzle games to recreate prints yourself), and a clickable playhouse that has different “rooms” that lead viewers to different children’s toys from Canada’s past.

Art Gallery of Ontario (AGO)

The AGO’s collection is searchable on their website, but some exhibits stand out more than others.

One gem on the website right now is The Boxwood Project, which contains countless photos of exquisitely tiny gothic carvings, accompanied by not just one scientific analysis showing how researchers figured out how the beads were made, but numerous essays on the topic.

Another feature is an interactive website compiling around 3,000 photographs taken by Henryk Rozencwaijg-Ross of the Jewish ghetto in a Polish city during the Holocaust. Visitors to the webpage are encouraged to use the “Build My Collection” function to curate their own exhibit out of the photographs and share it with others.

They have a list of “Online Exhibitions” as well, one of which is a website that can take you through the War of 1812 from four different perspectives, showing how Americans, Brits, Canadians and Indigenous peoples experienced the war.

The National Ballet of Canada

Through a partnership with Google Arts & Culture, an online exhibit shows the history of The Nutcracker ballet in numerous slides and photos, including a video explaining how a dancing horse costume is brought to life onstage.

Many other Canadian museums and galleries that lack interactive online exhibits still have photos from their collections available online for hours of perusing, such as the National Gallery of Canada and Gardiner Museum.

Google Arts & Culture also has partnered with hundreds of museums across the world to allow extra exhibits and gallery walkthrough online. Their top 10 list of museums that can be explored digitally includes numerous cultural wonders that -- due to travel concerns -- are largely off-limits to Canadians right now, such as the Uffizi Gallery in Florence, Musee d’Orsay in Paris, the National Museum of Modern and Contemporary Art in Seoul, and the Pergamon Museum in Berlin. 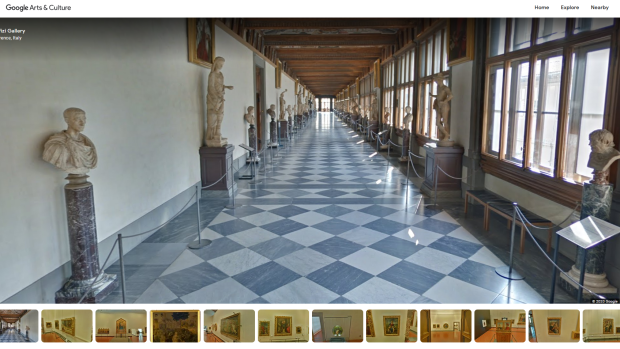 Still searching for something to do? Google also has 3d models of tombs, palaces and ancient landmarks as part of their Open Heritage project to digitally map the world and preserve human heritage.